Being creative is no problem lol can wait to share with you guys a fly base I'm making. Sometimes I think ive gone to far
G

Been stuck at home (my company shuts down when ice/snow gets real bad, small company, boss doesn't want to risk bashing up a truck and loosing it's capabilities for god knows how long) so I've been farting around with the vice and refilling my warm water box. Just a sneak at what I've been tying. 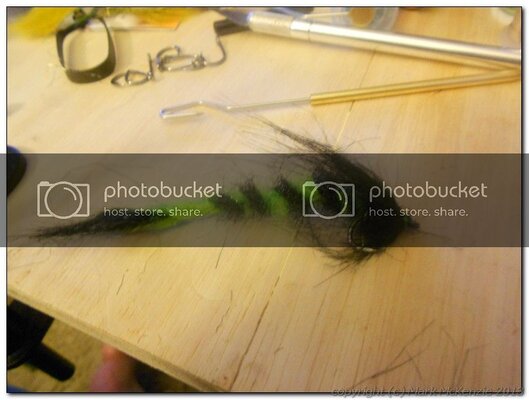 Is that a dubbing brush?
B

whoa those are crazy lol but dang i want some. I feel like I hardly have a base of material compared to you guys. I need to get to my local fly tying shop STAT
G

bigboy70 said:
whoa those are crazy lol but dang i want some. I feel like I hardly have a base of material compared to you guys. I need to get to my local fly tying shop STAT
Click to expand...

You will never save money tying your own flies, but you can ease up on some cabin fever, or customize patterns or create crazy ass creations to your heart's content. My tying materials themselves take up a medium sizes plastic storage drawer from one of those three drawer rolling organizers. My tools and thread/wire/floss spools take up a large Plano box. The sad thing is, even buying cheaper materials or buying them on sale - I've probably invested about $500 into just what's in the drawer now. Maybe $1500 over all the time I've been tying flies. That's a LOT of flies - turned out a lot of junky ones, funky ones, and ones that made me go "WTF is this fugly thing" months or years later when rooting through some bins. The nice thing is, you can always cut the stuff off the hook and reuse the hook if you tie up a fly you don't like. Or just give them away - because even the ugliest, poorest tied fly can catch fish like crazy. Fish see things differently than we do.

I recently read an article about Len Halladay - the inventor of the Adams dry fly. It had pictures of some of his flies, and one of the very original Adams ties. Most of the hoity toity types today would call them ugly junk, disproportional, and improperly tied. His early Adams had the hackle all wound behind the wings, which slanted forward more like antennae than wings. The body wasn't exactly tapered, and there was no nicely conical shaped head. It looked like some of the stuff I tied up in my early days of tying. But they caught fish like crazy and that pattern has become *the* most popular dry fly out there. There's probably not one freshwater fly fisher who doesn't have an Adams in his fly box somewhere. The same article went on to say that Halladay wasn't alone in that many of the old "masters" of tying and invention tied up rather crude flies - but crude by our standards of factory clone like flies with little variation - not necessarily crude by the day. Whip finishers hadn't been invented, or at least in common use back then. Most tiers used a series of half hitches. Head cement was yet to be invented. They used the materials readily available at the time. Halladay was said to use a lot of wool used for repairing socks, because it was cheap and easily obtained in a variety of colors. The adams uses grizzly and brown hackles, because the man raised his own chickens - Plymouth Rock and Rhode Island Reds. He used mostly silk or cotton sewing threads for his flies. He set the example that flies need not be necessarily elegant or pretty, by our standards today, to catch fish.

You don't need a lot of different materials to create flies, but if you get addicted to tying, you'll eventually amass a lot, because you'll get hit with some wild hair and decide you need a certain color of dubbing, or chenille, or hackle that you don't have. You'll decide you want to try something different with an old pattern. Look at Brandon on here - he takes a pheasant tail and tweaks it and it's an amazingly beautiful, and fish killing machine. I'd say I like his pheasant tail variants more than the originals.

Also look at the Bud Light Specials created by another member on here, from what I hear they slay the fish up at Trillium.

The other cool thing about tying, is you can take something you see someone else do, and tweak it or incorporate it into your own tying and create all sorts of neat new flies. The popping worms pictured above were a WAH inspiration the other day when I was tying up worm flies. I figure that in dark colors, they'll look like leaches or baby snakes trying to swim in shallow water. Or maybe the fish won't think it's any of that, but will still take a whack at it for good measure.
B

love the crawfish pattern been looking for a good one
B 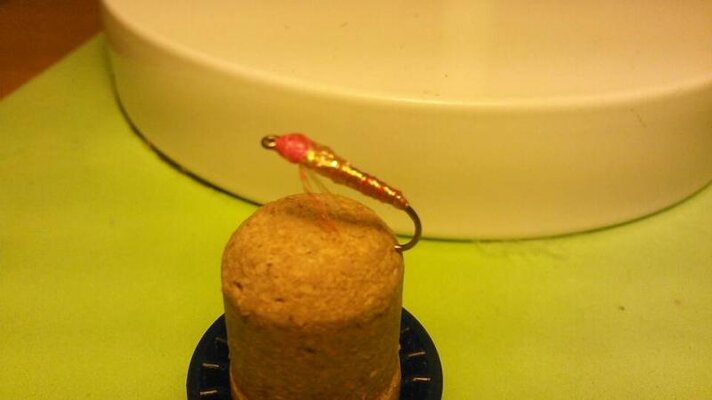 is that lower one with the herl a quill gordon?
B

broadening my horizon with fly tying going after more challenging flies to tie i see a lot of goose biots for tails and wings. They look great anyone have any tips for tying with these slippery buggers I seem to lose them or once I get them on the hook and think there secure next thing I know they've shifted any tips or tricks to getting these things to stay put?
S

When I first started using them I tired them one at a time and with really tight wraps. You can even put a drop of glue or hardener down to make sure they stay
B

thanks SS ill give it a go lol right now
B 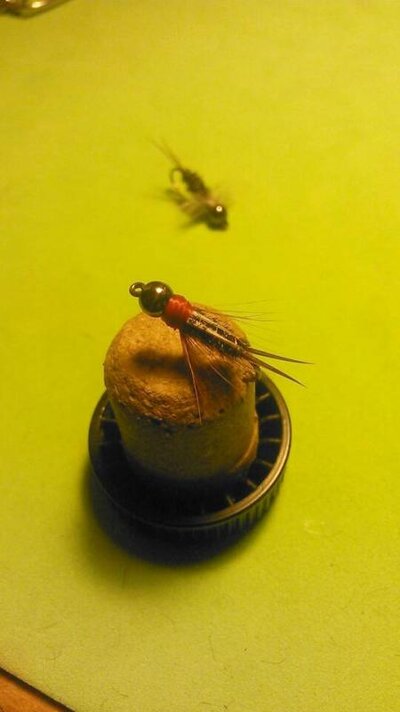 Looks good. It gets easier and easier
R

steelhead_slayer said:
When I first started using them I tired them one at a time and with really tight wraps. You can even put a drop of glue or hardener down to make sure they stay
Click to expand...

I use a sticky thread wax to hold them. Sometimes the thread base will create a slick surface and things get pulled around the hook shank when you tighten down. A little wax and a pinch wrap does the trick.
R

Here's one I tied this evening. Like a sparkle Dunn but with Peacock hurl as the body and red yarn for the parachute. Some believe the parachute color does not matter much and that bright colors are easier for the fisher to see in faster water. 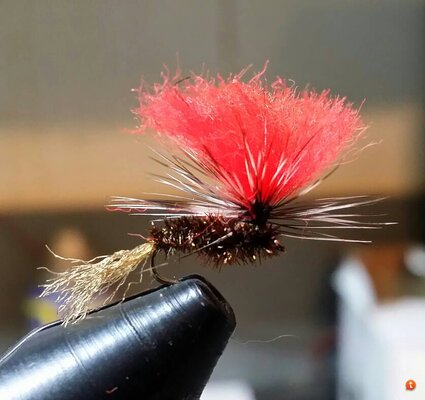 Antron ok thanks just a question cause imma noob to this but isn't that representing the shuck?
R

That's correct. I'm a noob as well. I tie a lot. Almost everyday. Nothing like catching a fish on your own fly.
B

Ok next question why would you put a shuck on spinner which is a sexually mature mayfly thats laying/dying or was this just to do something different just watched a really good video of a mayflys life cycle really informative
You must log in or register to reply here.

Sunday at 9:31 AM
Gulfstream
G