GungasUncle said:
Been playing more with dubbing loops. Created some interesting bugger variants that I dub the "Hairy Bugger"

They use deer hair spun up in a dubbing loop to form the collar, instead of using a hackle feather. I also substitute Ice Dub for the body vs chenille.

Copyright notice is a year off - here it is the 11th and I keep forgetting to "fix" my dates on my photo editor. Doh.
Click to expand...

Some Bunny Surf Smelt patterns that have been producing well for me lately.
SF 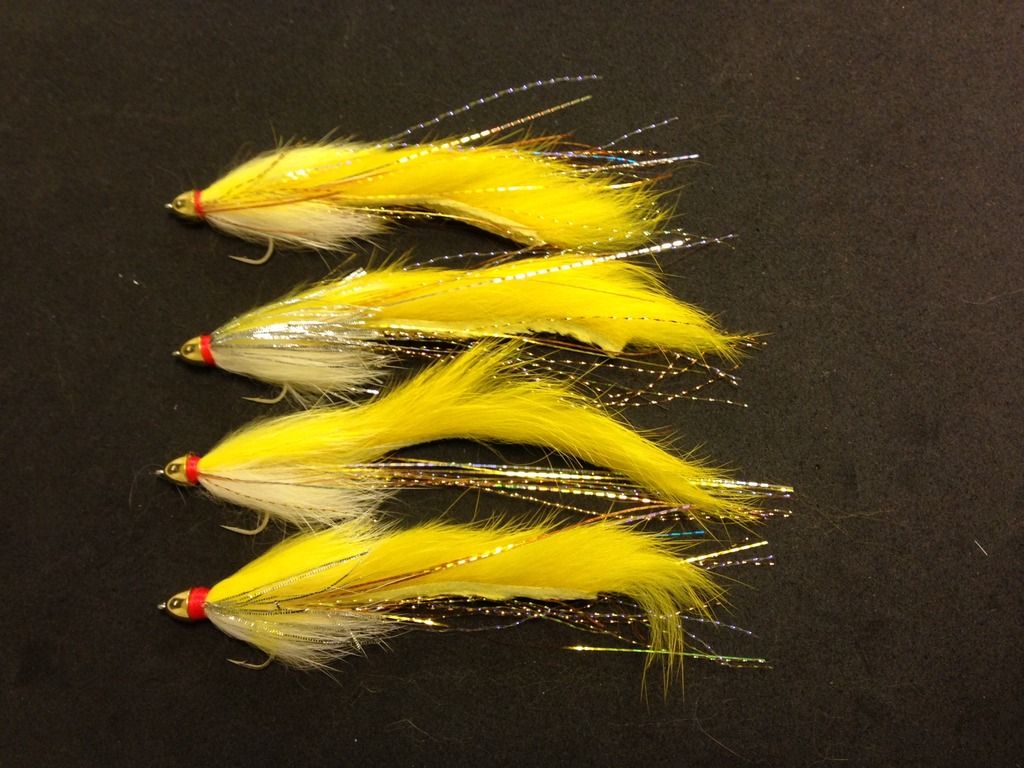 Here's one more fly pattern - it's super simple, I came up with it to imitate a soft plastic Fluke type soft jerk bait. It's rabbit strip, with a dubbed body on the shank, tied on an EWG style worm hook:

First time I fished it - I found out that Trout like them too:

Moderator
Most Featured
Looks like you have been on a fly tying terror. Great looking flies!
G

You have no Idea, Lon. I've been in the process of organizing/reorganizing - and adding to the mess. Just in *bass* flies I have 8 Plano 3500 size boxes, plus a couple normal fly boxes of streamers and bass flies, and they spill into other boxes yet. And of course I have half a dozen or so trout boxes, a box of panfish poppers & flies... my 5 year old son has two of his own fly boxes (which have flies I tied, some he tied, and some store bought) - as I weed through these, some are getting cut up and materials reused, others are going into a big pile to give away or sell (or both)

My passions have shifted away from dry fly trout fishing to chucking junk for bass and trout. I've got a Plano 3700 full of dry flies that currently have no other home in my boxes - most are size 16 and smaller, and my eyes just don't see that great anymore without glasses, and I don't like fishing light tippets for anything bigger than bluegill anymore. I sold my 2 weight - the lightest rod I own right now is a 4.

I'm trying to move a Loomis 8 weight to make room in the stable, with plans to replace it with a TFO Mini Mag (much better swing weight for overhead casting = less tiring) for chucking big junk at bass and maybe some saltwater stuff. There's also Muskie to target up in Merwin this year. I got to cast the Mini Mag at the Sportsman's show and fell in love. It's exactly what I'm looking for - I was thinking about ordering a custom 7'6" or 8 foot blank from CTS - but the Mini Mag does exactly what I want, and the complete rod is half the money of the CTS blank by itself, so the cash from the sale of the Loomis will be enough to get the Mini Mag rod and a Rio Leviathan line to match up with it, and maybe an OPST or Rio Outbound Short shooting head for the spare spool.
G

Are the last two Tubes with Cone Heads?
G

Chromatose;n610026 said:
Are the last two Tubes with Cone Heads?
Click to expand...

Nope - they a twist on Kelly Galloup's Sex Dungeon - instead of the stacked deer hair head, I decided to do a stacked Laser Dub head. There's two hooks hidden in there - a size 4 and a size 2 Gamakatsu B10S. They are hard to see, but there's small brass eyes hidden in there too, to give the fly a subtle jiggy action.

I got a killer deal on a rod I've been hunting for for over a year at the Sportman's Show - the TFO Mini Mag, which was actually discontinued by TFO last year. The TFO rep had his closeout rods at River City's booth - and Don made me an offer I couldn't refuse (lol) - I *had* to bring the Mini Mag home. He had two to choose from, I snagged the "8-10" which is actually rated for 300 to 400 grain lines (if you go by grains, thats 10 to 12 weight) like a Rio Outbound.

I test cast the rods with the lines that I have (heaviest normal non-skagit head) - in this case a variety of 8 weight lines - Rio Gold, Sage Freshwater, a Cabela's WF8 intermediate, and a Rio Leviathan 250 grain full sinker. I was duely impressed by how well the new stick throws line, and when I get a more appropriate (350-400 grain) line, I'm confident that the hugest flies I have (like my 11 inch trout imitation) will sail out.

I did have one booboo test casting - I had a fairly heavy jig style worm fly (point cut off, thank god) to see how the rod handled heavy stuff. I was going for broke, as I'd hit my backing knot on a few casts with a bit lighter fly. A combination of a sudden wind gust during my back cast, and a extra oopmh haul, and I wound up smacking myself in the left ear with said fly, which broke skin, but had so much force on the impact that it snapped 15lb flourocarbon tippet, caused the fly to continue sailing about 30 feet out into the pond, and the line on my neck and head felt like I'd been bull whipped. But, with that 250 grain line, I was throwing a 5 inch rabbit strip worm fly (moderately weighted with 20 or so lead wraps) 100 feet. I was damn impressed and felt like Lefty Kreh for a few casts.

I've got a few more flies I've tied up this week I will be posting pix of soon.

Nice take on the Woolybugger & Sculpin Streamer patterns. I can not make comment on store bought rods as I have been wrapping my own now for a number of decades.
Enjoy your new stick just the same!
M

Nice, somehow I missed this thread.
I whipped up some freestyle Hairwings this morning while watching the snow fly. Needed some blue

Mr.Joshua said:
Nice, somehow I missed this thread.
I whipped up some freestyle Hairwings this morning while watching the snow fly. Needed some blue
Click to expand...

I've been trying to improve my fly tying. Still a little rough, but it is a lot of fun. Here are a couple of Hairs Ears from the other day. I’ve tried a few other materials for the body but the Simi seal type dubbing is always my go to for sure. The flow and movement and how long it can be picked out is a big reason why. I tied this black and blue one with black ice dubbing for the body and although fishy, the fibers aren’t as long as the seal Thanks Brandon. I really like the idea of the colored bead on your leech patterns. Definitely compliments the colors in the body materials. I’ve been working on a new dry pattern (new for me anyway). Size 14. Cheers!!