scched said:
I was on the Oregon side below tanner creek tossing spinners in the back eddy. Water was crazy high. Only saw 2 landed between around 20 dudes plunking in the five or so hours I was there.

No sturgeon for you guys? they were creating so much chaos for us I saw probably 20 hooked some as big as 8ft jumping out of the water pretty wild day

Diehard said:
No sturgeon for you guys? they were creating so much chaos for us I saw probably 20 hooked some as big as 8ft jumping out of the water pretty wild day
Click to expand...

nope! But I wouldn't have minded catching one to be honest, never caught one lol

jamisonace
Hit a couple rivers this week and found some fish. I had a couple advertising clients call me up and ask if I would take them springer fishing. It's never hard to get me to go fishing but it's especially easy when I can call it work. On Thursday I took a client and his son on a short float. The water was a little high but I sent him home with a nice 12 pound springer. This felt really good because he had already gone with two guides and was skunked both times. This fish was a blast. We hooked it in a run above Davis Rapids on a 6-12lb side drifting rod and 10lb leader. I was expecting a summer steelhead in this run but this gal surprised us. It ripped line downstream to the top of the rapid and we tried to pull it back up for a few minutes before I knew it was a lost cause. We ended up taking it down Davis and landing it at the bottom. It was a rodeo but made the whole experience a lot more fun. This was his first salmon and his biggest fish which makes it way more awesome. The next day I took another client and his dad up north. We did an afternoon float because I had work in the morning. We immediately hooked and lost a fish and then got one on the next pass. Then things got slow.....for us anyway. My buddy was guiding his second trip of the day so I was letting him have first shot at holes downstream of where we got our first one and he ended up limiting a couple guests. He got his last fish and we slipped into the hole and got the fish in the picture. You can't see it in the picture but it was a great sized fish for this river and in really good shape. So we went home with one limit for these guys. I was really expecting it to be better but we got a little unlucky with the timing because two guide boats put in less than a half hour before we launched. I can usually count on being alone when I fish the afternoon and even after the river has been hammered by guides it fishes well after a couple hours of rest.
Last edited: Jun 18, 2022

jamisonace
Afternoon limit. Apparently we are calling these "tributary spring chinook". Some jackass felt the need to pretty it up. LOL 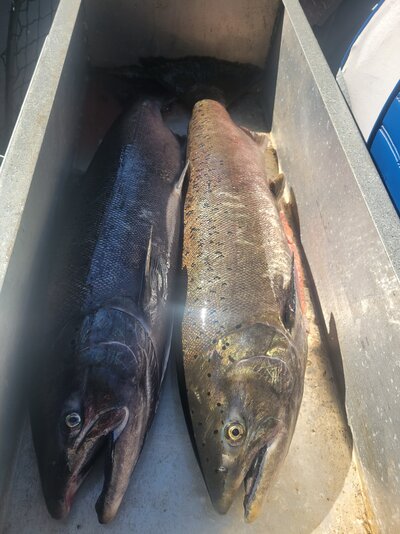