The Sandy was good to us

B
bigdog
Youngbuck (Tom) and myself set out for the sandy in the dodge park area, ran in to Fishtopher (Chris) and his friend (sorry don't remember the name) We tossed around in the park for a little while with nothing to show. Chris and his buddy left shortly after that (think they went on a hike). We decided that we needed to take a walk and do some hunting. Two holes up we saw some jumping got nothing. Moved up a little more to coho island and with the first cast with some freshly cured eggs Tom gets fish on.

We worked the hole for about five minutes or so longer and he gets another one on (nate had to let it go). Worked it some more and decided to move our way back down. After working the waters on the way down we ended up at the pipeline hole. I found myself loosing one do to a knot that I saw in my leader but was to lazy at the moment to change it so lost that one.

Got a real nice take down set the hook and holly cow this fish was straight out diving to the bottom, didn't get to see it for about five minutes wanted nothing to do with coming to the top. This fish was a fighter got it to the top of the water and now we see why it was being so hard to bring in, got myself in to a nook. My first nook and I'm out here trying to land it on 12/10 line and my IM8. Man have to say was fun and great but dang thing was a nate so he had to go back but was still fun and worth the fight.

So after the nook my arms were a little sore so had to take a little time out. After the time out back to the water with the eggs. little while after seeing some rolls and a few jumps, it's fish on again nice big fat bright crome hen. This was no nate and was a good fighter as well.

All in all good day, little tired now but still good day and worth every minute of. 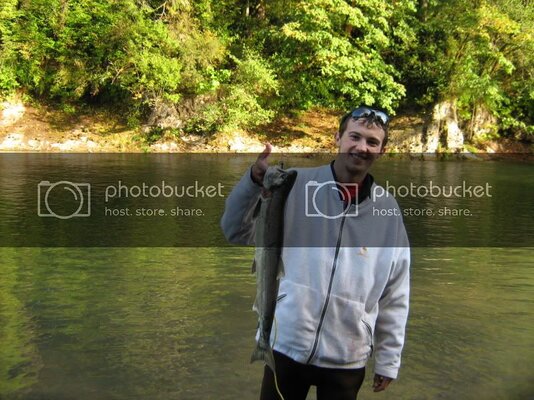 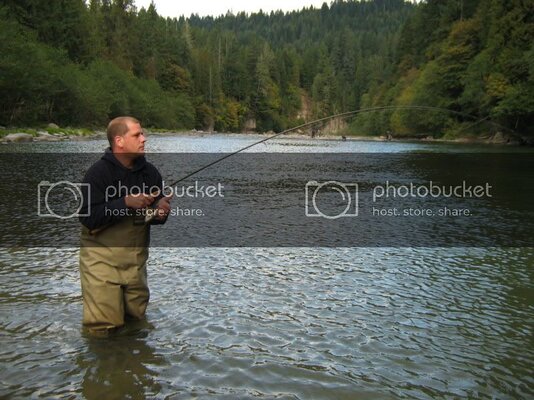 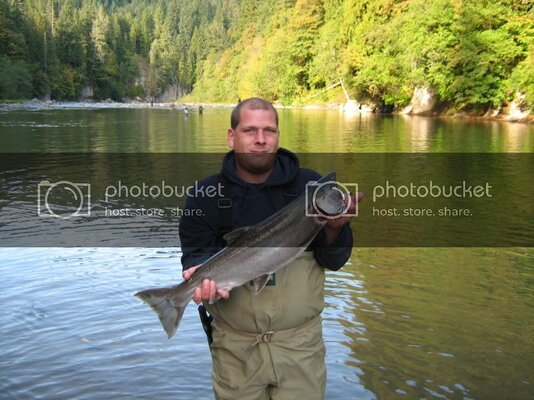 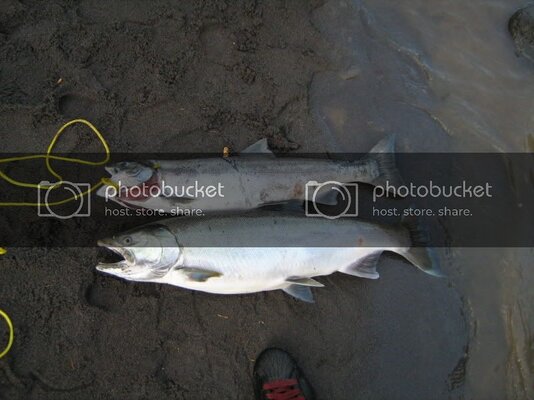 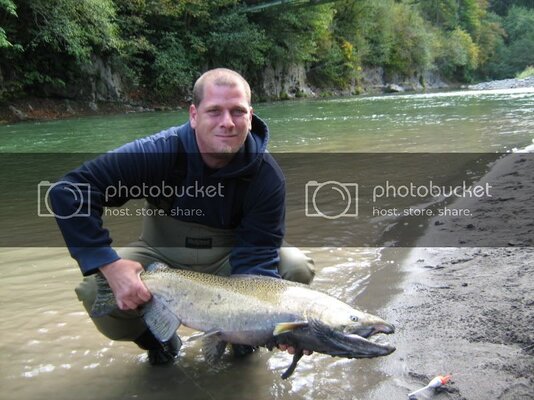 M
metalmania
Nice job boys:clap:. Tom I told you you'd be a fishslayer in no time.
A
autofisher
Right on guys. Good to see more people gettin into the fish. Keep it up
M
Markcanby
WOW:shock: Nice fish guys Im gona have to try the Sandy one of these days.
B
Bohemian
Congratulations! :clap::clap::clap:
Those are some great pictures!
A
Anyfishisfine
Nice fish!

The Sandy is truly awesome.
M
mgdguy
Way to show the rest of us how it's done! :clap: :clap: :clap:
A
All Ford
Big Dog! What time were you at the pipeline hole? I was there from very dark am to noon today. Hooked 4 and they all spit in less than 5 seconds. It was sooooo weird. Yesterday I hit the river ( same spot ) at 6:20 started fishing at 6:45, had my first fish at 7:01 a nice 30 inch buck and then a 27 inch hen at 7:30. I was back to the truck and headed to work by 8:15. Then today, NOTHING. Coho are some fickle fish. I threw everything at them and they were giving me no love when just yesterday they were all over me. It's all good I still love them. Glad to hear you had a good day. Bummer, I must have just missed ya.
Y
youngbuck307

we try..
There is plenty of fish to be had in the sandy right now all you have to do is put your time in and find where they are and what they want... Yea sam you must of been able to smell it on me from day one just took a good teacher to send me in the right direction (thanks once more to you and alan!!!) and i didn't get to see how good that pic with the nook looked till now thats one for the photo album!!!!:dance:

Thanks CJ for taking me with you we got to do that agen!!!
Y
youngbuck307
yea we didn't get down to pipe line till a lil latter must of just missed you!!! dont think it was much after that. But yea bite just kinda turned on out of the blue for us... after we were there for a while... kinda funny being middle of the day and all!!

Irishrover
Looks like you guys had a good day of fishing plus a little fun getting down to the pipeline hole.Way to go.
O
osmosis
Nice fish guys.
That native Sandy Tule is a nice one Cj, Great photo!
F
Fishtopher
Nice job guys! When we walked down, we were only there for about an hour and decided to bail. Never did get into any fish. Guess next time we'll stick around and you guys can show me how to fish:lol:! That looks like one mean 'nook!
B
bigdog
Allford: We must have just missed eachother, wish would have see you there would have been nice to meet up again. Have to let me know whats going on so we can hook up sometime. We did run in to Here2fish at that hole.

Alan: Thank you, was a great time landing that beast thats for sure. That was my first nook and I now know what everyone means about the nook dive. That fish was a diving fool. The teeth on that thing were a little scary, and he gut bombed my hook so we had to cut the line as short as we could, there was no getting that hook out without killing the fish.

Chris: Yes you should have stuck around, but you always seem to leave earlly what's up with that bro? Not sure if going to be able to get out next weekend or not but if I do see about hooking up for the day (and I mean for the day not just the morning).

Everyone: Thank you was a great day of fun, I finaly got to tag some silvers this year instead of getting in to nate.
C
cchinook
sandy

last friday - 2 10lb. hens and one 14lb. buck , limited for the day - yesterday
1 8 lb. hen - all on blue fox # 4's - Oxbow park --
L
Lovefishing
Where abouts on the Sandy do you guys fish? I took me daughter down by the bridge near Dabney Park on Saturday Morning, (First time at the Sandy and Salmon fishing) but nothing was happening there. Are there better spots I can go that might be better?
Y
youngbuck307
the fish are in there and dabney park was doing good for a lil while.... try up higher like area we were dodge park and cchinook got a few out of oxbow he said.... fish are in there just got to find what they want
J
joef
bigdog which part of that sandy were you at. I pulled a coho buck out of cedar yesterday
B
bigdog

Lovefishing said:
Where abouts on the Sandy do you guys fish? I took me daughter down by the bridge near Dabney Park on Saturday Morning, (First time at the Sandy and Salmon fishing) but nothing was happening there. Are there better spots I can go that might be better?
Click to expand...

It's not always a metter of where as much as when. Any place is going to be good at one point and a time. The fish have to go through the whole river to get to the hatch, some places are better at time because the fish will be holding in that spot but other places are good when the are running through and pushing further up the river.

All the fish that are coming don't all shoot through and hold in the same areas at the same time, they come through in pods. There is a good amount of fish in the rivers just have to find them and like Tom said figure out what they want. Have to put lots of time in on the water and some times do a good amount of hiking and hunting.

One thing I can say for sure is never give up and when you get in to your first one it all will have been worth it.

joef said:
bigdog which part of that sandy were you at. I pulled a coho buck out of cedar yesterday
Click to expand...

Was in the dodge park area that day.
You must log in or register to reply here.

"MORE TO COME" My way of fishing