I started the morning off at Cedar Creek and there were 6 cars in the hatchery lot at 7:30. Water level looked good, at around 10.3 ft at the gauge and dropping but it was crystal clear. Nobody on the bank had caught anything by 10 AM, but a rafter floating by claimed to have caught one. I tried a #4 silver blue fox, floating a pink aerojig, and drifting a pink worm before giving up. I didn't like my patch of bank so I decided to move over to the Clack.

I drove to Barton park and fished the drift above the boat ramp/bridge. The water was perfect steelhead green, and not flowing too fast. There were only a couple other guys there and it didn't look like anyone had caught anything. I didn't have any bites drifting that pink worm or yarn egg patterns.

I didn't expect to catch anything, it still being pretty early for steelhead, but I thought I'd try. I didn't spot any fish rolling either.

So no luck, but at least I got some much needed time on the water and I managed to get into work in Hillsboro by 1.

Thanks for the report. It is always nice to see one, I am conflicted on posting sometimes if fishing is good because................well you know why. I've had a tough go so far this year. landed a nice nate last week but a couple of skunks after that and then 0/2 the next time. One became unbuttoned and the next swam downriver into a logjam and actually stayed on for quite a while but I got about 3 feet from it and,...... snap goes the leader. Still have not tagged a winter this season.

I know of fish recently caught (last weekend/yesterday) in both rivers, but lower...........
G

Most Featured
Thanks for the 411! They will be here .Also,the water temps have been low,so I am sure that has an effect on the bite as well
W

Was also at the boat ramp area at Barton bank fishing yesterday, with nada. Heard the same from other people that we talked to, including a drift boat. My buddy did get one last week though in the same area.
B

I started at Barton that same morning, fishing downstream from the bridge and even further just past the entry of the rapids... nothing to report. I'm hopeful that this will be a good run this year. I was using a pink worm with a jig and Nightmare jig.
I moved to Riverside Park to test my luck there, I've only heard of two fish being caught on the Clackamas that day from drifting. We'll see next weekend! 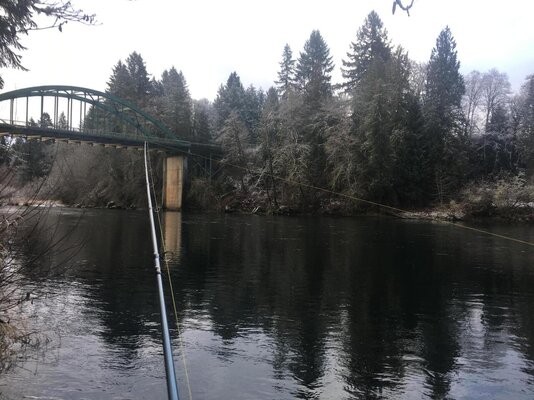 Give it two more weeks and fishing in our rivers should start picking up.
You must log in or register to reply here.