Preferred style of kayak to fish from....sit in, or sit on?

D
dub
Just curious which you prefer, and why.

C_Run
Most definitely a sit on top. If you flip a sit on top, you get back on and keep fishing. In a SINK, you're screwed. Check out kayaks made for fishing. They come with many convenient features. There are many choices.

Sit in kayaks are almost never used for fishing, they are designed primarily for whitewater or long ocean voyages. To remain stable they require a very low center of gravity which precludes adding gear/rigging to them. The low sitting position required in these kayaks makes fighting and netting fish much more difficult. So you can't load them up with fishing gear and don't have a good ability to fight fish from them = wrong platform.

SOT kayaks are wider, heavier, and allow a much higher center of gravity, like a surf board with a seat on it. The trade-off is that the human operator cannot tilt and roll them the way that Sit In kayaks are, this is much of what makes them unsuitable for fast moving water and rapids.

Here is an image of my Oasis loaded up to crab and fish very close to the ocean on the Siuslaw River, I am launching near the crabbing dock and expecting to be out in wind waves, boat wakes and occasion ocean swells coming in from between the jetties and I am sitting fairly high on a Hobie VantageCT seat plus I will be pulling up crab pots.... 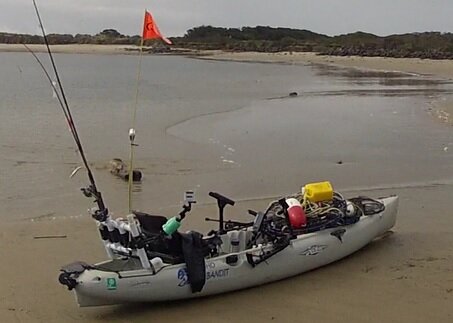 bass
I agree with Roger. There are a few sit in kayaks tailored for fishing, but I would still take a sit on top over a sit in any day.

SOT stability example: trolling Siltcoos on Sunday for coho, Hobie VantageCT chair (high sitting position), and your 75# dog decides to climb up on your lap for a few minutes...I was so hoping to hook a big fish while she was up there (and the GoPro was running) but alas, nobody appeared to be catching any on Sunday...cheers, roger
M
Mattyonthebass
No Title

SOT is the way to go! Very stable and easy to get in and out of even while out on the water. I miss my kayak.
C
Camo
Kayaks are fine! But also look into a duck boat with a wide beam. Some are capable of carrying two fishers in comfort and twice the gear.
You must log in or register to reply here.

Black marlin from a kayak?