F
Fishtopher
Went Gator fishin' at a new spot on Saturday with my son and a friend. Tied up my rig, hucked it in, and started to rig up my sons rod for some Bass. As soon as I handed him his rod to cast, mine started to do the trademark wiggle wiggle doink doink, so I walked over to it thinking about how someone earlier stated that when a sturg finds food, sometimes it will lay down on it to hide it from other fish. So I gave the reel a half a turn, and WHAMMO! I set the hook, felt a few head shakes, and my 11ft Heavy Action Ugly Stick just about bent in half, and POP. Line snapped right above my knot. I had not retied my knot in about 50 casts.
I have no doubt this would have been the biggest fish I have ever caught! I've caught a lot of Sturgeon, but this one was HOT! I immediately threw my rod down and started swearing like a mad man...till I glanced at my son...his eyes were wide, jaw dropped and all. :redface:Woops. "Earmuffs!":lol:
Had tons of drive bys, and a few shakers after that, none larger than 30". But my son did catch a nice lil Bass. 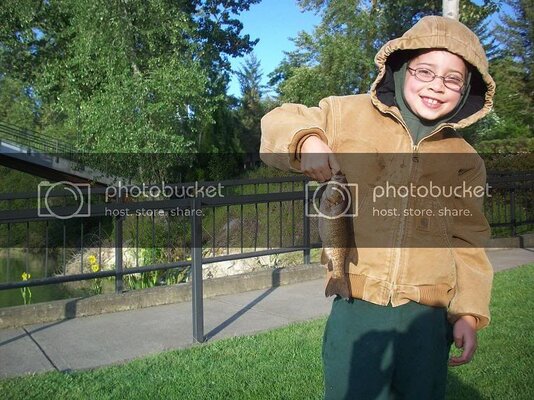 So I was at Roehr Park in L.O.. Anyone fish there at all?
I loved being the grubby guy getting all the dirty looks from the yuppies walking their Poodles on the walkway.


I probably have next three keeper days to fish before I will be working 7days a week until August. So anyone want to get a gator hunt going this week? Pitchforks, torches and a mob of OFF'ers?!
Last edited: May 25, 2009
S
SNDSLGR
isn't Roehr the park that is elevated up off the water? Do you fish it like the wall in OC or is there bankside access?
F
Fishtopher
I guess I was up river just a lil bit...Lookout Park maybe. I parked at Roehr, and walked maybe a quarter mile up the walkway.
B
beaverfan
I will have to grab my sturgeon poles out my dad's boat and come join you! I have been dying to hook into one. I haven't been since I was a kid and never got a nibble. I was going to go out for them yesterday but after 4 hours of Shad fishing was fairly burnt and was ready for some shade. You gonna be out all three days or what?
T
The Nothing
i've had that marked as a place to check out, haven't done so though
if i don't start a new job this week, i'm definitely down to check it out
F
Fishtopher

beaverfan said:
You gonna be out all three days or what?
Click to expand...

I am gonna try. Right now, only Friday is for sure. Thursday and Saturday are only probably's.
F
FishSchooler
wheres Roehr park? I live in LO and never heard of it...
W
warren22825
Hey Fishtopher, I live in L.O. and didn't even know Roehr Park existed until i read your post. Wow what a nice spot in the heart of yuppie town! My wife, 6 y/o son and I had no luck but a 15 inch shaker sturgeon I caught on a worm, but we will definitely be going there again very soon with big gear. Thanks for the info!!

Y
youngbuck307
do you have to cast way out to hit the hole???
W
warren22825
I don't know where the hole is yet.
F
Fishtopher
Nah, my fish on came on a just a light toss out there. My partner hucked his bait to the middle of the river and got as much action as my meager casts. The platform/dock I fished from was sticking 30ft out into the river anyways.
T
The Nothing
been looking at this area for quite awhile but never actually stopped and fished. The main channel of the river from the train bridge to, well, The Ram basically (just south of the park) runs 60-70 feet. The deepest spot (nearly 80) hits right at the south part of the park.
You must log in or register to reply here.

F
I caught a salmon and a steelhead at Gales Creek!
2