Most Featured
I type this with a light heart and leaden arms.

I have not done much fishing lately and I wanted to start this year off right. The weather for New Year's day looked good so I decided to see if the Willamette river was where I had left it last. 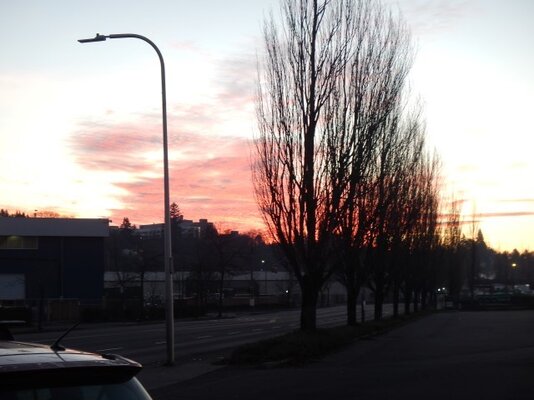 Thankfully, it was and looking none the worse for wear given my abject neglect of that fine lady. I got to the Swan Island parking lot around daybreak and readied my kayak while gazing on a beautiful sunrise.

You know what they size, red skies in the morning are a sturgeon's fair warning (or something along those lines). 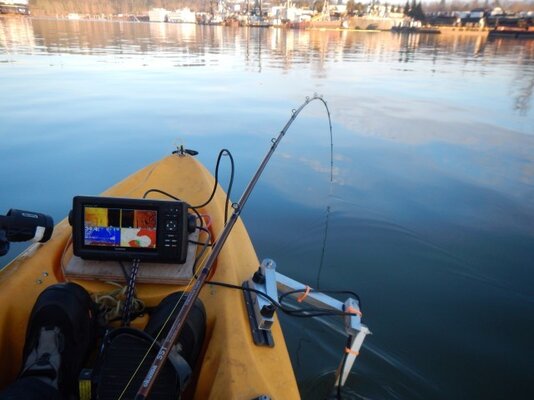 I was feeling like it was going to be a magical day and even feeling a little cocky. I guess I deserved what happened. I was screwing around with my camera trying to get my kayak in the perfect position to get a better fighting shot and I did not keep enough pressure on the fish. It made it to the bottom and hooked my line on something.

You should never disrespect a gift from the Willamette. She is a fine lady, but a woman scorned ...

I could still feel some shaking but after a few seconds that stopped and I wrapped my braid on my pliers handle and tried to break the line. Luckily I was able to retrieve the whole rig, but I destroyed the hook and had to retie.

I went back to where I hooked up and cast again, leaning over my rod in anticipation of another quick bite. After a bit my back began to ache. After a longer while later it was really stiffening up. My punishment for my flippant disregard of my first gift was now in full swing.

After that I spend the next 3 hours moving from spot to spot looking for a good bite. I picked up 5 small shakers during that period and I was starting to doubt my abilities as a fisherman. I marked a lot of suspended fish but I could not find fish on the bottom. I am not sure if the suspended fish are sturgeon or something else, I just know they are a waste of time.

I went up and down the river looking for fish. Each time I felt like I found a likely location I would at most catch one small shaker - and usually it was just plain nothing. I did not spend more than 10 minutes in a spot and moved constantly.

Eventually I worked my way back into the harbor continuing my search for fish. Eventually I found a huge school of sturgeon all hugging the bottom like a fat man hugging a bag of chips.

I was still nervous given the day's failures up to that point. I did not bother to anchor since there was a nice steady breeze which makes it easy to hold the kayak in position with my paddle. I cast out my half anchovy and as the bait hit the bottom I could feel sturgeon rubbing against my line.

I am telling the truth when I say that I could feel the whole mood of the river change in a heartbeat. I knew I was forgiven and seconds later I felt that familiar thunk, thunk, thunk of a biting sturgeon. I reeled down tight and was into a good sized fish that put up a great battle and I knew that it was game on.

I went back to where I hooked up and tossed out again. Once again I almost immediately felt a very subtle thunk, thunk. I reeled down tight and all heck broke loose.

A monster of a fish took off like freight train. I leaned with everything I had keeping my rod at at the breaking point, but I am not even sure that big girl knew (or cared) that she was hooked. At first she just swam around slowly, meandering as if she did not have a care in the world. She was just slowly cruising around. This time I took a quick picture and set my camera down. 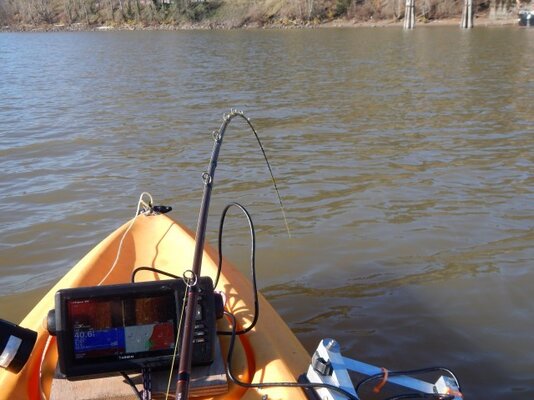 After about 10 minutes of cruising around at about 3/4 mph she decided that something was bothering her and she upped her speed. For the next half hour she pulled me around the harbor at 1.5 to 2.5 mph. I could feel her building agitation as she would first go one direction and then suddenly switch and go another way.

Each time she changed direction she violently jerked my kayak - a couple of times catching me off guard and making me scramble to shift my weight and keep my balance. I think I now know what it must be like to a chihuahua on a walk with an impatient owner.

As the battle wore on my arms began to burn and I was not sure I would be able to keep my grip on my rod. I started resting the rod on my knee and then bending my leg to pull up on the fish. If my friend Brian had been there I definitely would have passed him the rod at that point. However, I had no option but suck it up and persevere.

So I kept the maximum pressure on that fish even though my arms were on fire and I was beginning to think I would never budge that fish. I was trapped in a world of pain coupled with a little bit of fear that my exhaustion would overcome me and cause me to have make a terrible miscalculation.

I blocked out everything except for leaning on my rod and then, could it be, did I just move that beast a little? I felt re-energized and for the first time since I had hooked up I felt an odd, foreign feeling - hope.

I used every trick and bit of strength I had: using my legs to lift the rod, using very short pumps to slowly raise the fish, keeping my kayak dead over top of her. Slowly, six inches at a time she started to come up.

I am not sure how long it took to get her up once I started to win the battle but it seemed like an eternity. Once I saw the massive bubble release, I could feel them banging off the bottom of my kayak as the came up all around me, my confidence grew.

The end of the battle was somewhat anti-climactic. She made a couple of short runs once I got her up but I think she was as ready to be done with my as I with her. 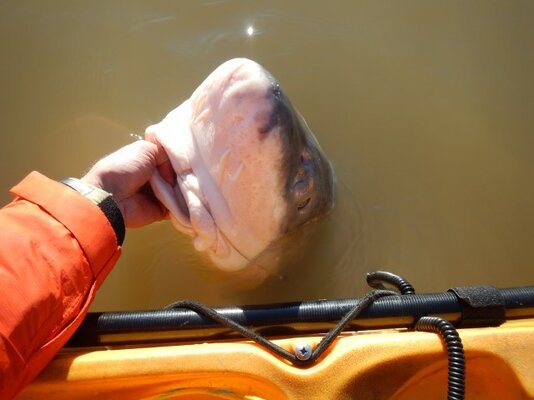 So after 47 painful minutes, she was finally mine. I could not measure her by myself but I would put her at around 8'. She was so big and heavy that when I pulled up on her to reach her mouth and unhook her it was the kayak that listed further rather than me moving her.

I was trying to decide if I could help revive her when she violently wrenched free and drenched my good day as she turned and sped back to the depths.

My arms felt like jello at that point but I could not bring myself to leave. I fished until almost 4pm with the bite staying red hot the entire time. Most of the rest were in the keeper slot (if that existed) with maybe a quarter of the fish being shakers.

So, today I type this with a light heart and leaden arms and I wish all of you a Happy New year.

Bass Nicely done, I feel your pain Bro. Been thinking of hitting it myself.

Moderator
Another great story! And this is one of the funniest lines ever ascribed onto these pages, IMO:

"Eventually I found a huge school of sturgeon all hugging the bottom, like a fat man hugging a bag of chips."

And this one gets at least an "honorable mention"; on the unOFFicial Mayor's favorite comedy list:

"I think I now know what it must be like to a chihuahua on a walk, with an impatient owner."

Hi John! Nice read. Did you remember to play a tune on that Gibson sturgeon rod? Haven't much of you lately, been ill? Dana wants to give dino fishing a try. PM him. Lets all have a fun fishing NEW YEARS. Tony

Most Featured
Thanks guys. That was a memorable day on the water. Overcoming a tough start always makes a final victory taste all the sweeter. Glad you appreciated my humor TD

Tony, I have been fine - just busy. I fished in 2017, not as much as normal but I got out some. I just did not have time to write up reports and I drifted away from the forums. I am hoping that I can get out more this year and have time to participate in the forums on a regular basis.
H

What a fantastic read. Thank you for sharing.

thanks for the up date John. Tony
You must log in or register to reply here.