I think I need another box

T
the_intimidator03
So. My latest flies have just arrived. I must say I think I need another box. Wattyall think? And how would you divy the flies up? 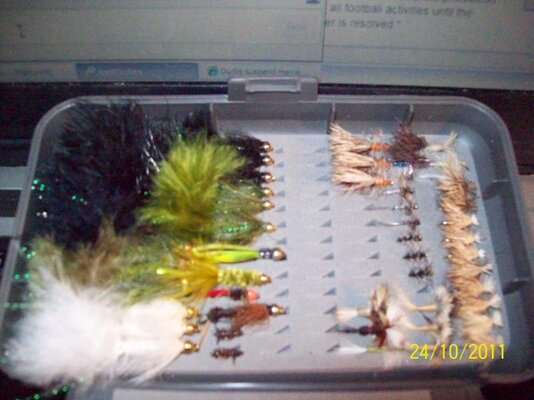 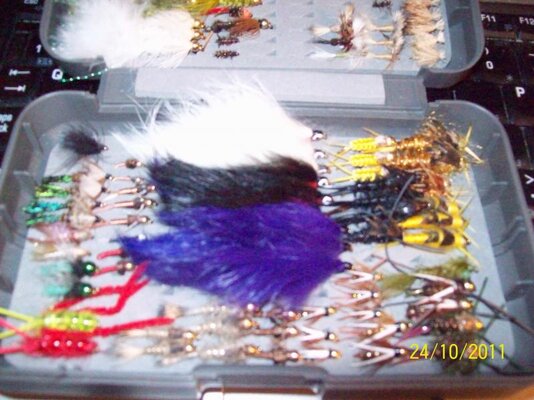 BTW this box is 6 x 3 1/2 x 1 1/2
Last edited: Oct 24, 2011
F
flyguy
Nice looking flies! Where'd you pick those bad boys up!?
T
the_intimidator03
hmm it seems that they magically get sent from you to me LOL Thanks agian for the speedy delivery. now to find a stream. didn't realize those #18 mosquito's and gnats were that small... i hope my tippet fits lol
F
flyguy
Glad you like 'em! I'm about to place my first order of fly boxes by the end of the week. I'll be getting in 270 boxes and they will be priced much lower than you'll find them anywhere else on the web. There will be five styles to pick from to start with. They should be here in about three weeks I hope! I can post some pics if you want to see them?
T
the_intimidator03
sure that would work
F
flyguy
Boxes coming soon.

I looked over my invoice and I'm actually ordering 6 styles.
I'll have 370 of them for super cheap!
Here they are... 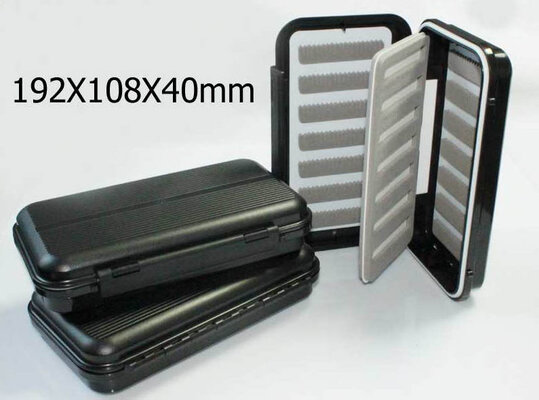 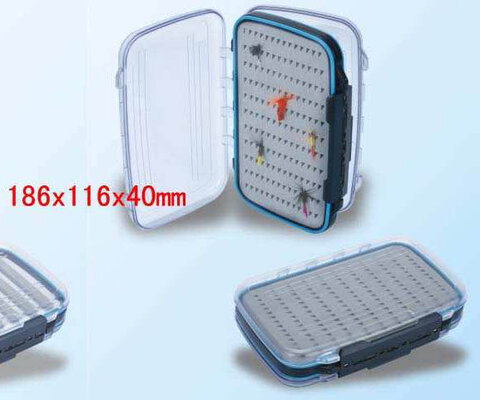 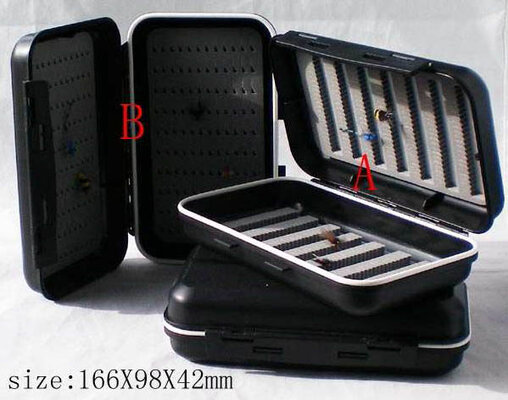 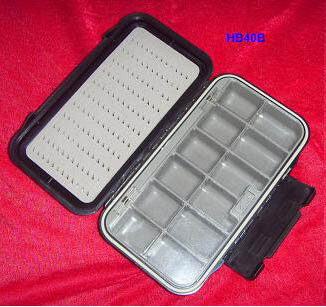 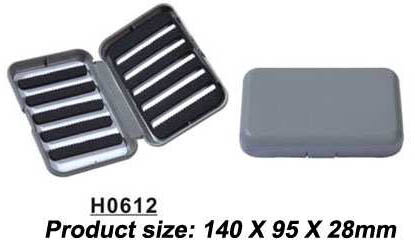 T
the_intimidator03
boxes 1 and 2 look nice. just got to figure out how i want to divide the flies between boxes. I am thinking with my current box having 1 side buggers/streamers and maybe some of the larger stone patterns. the other side nymphs. dries in a seperate box.
F
flyguy
That sounds like a good way to split them up to me. I keep my buggers and streamers together with several other larger trout patterns... I keep my dries in another box with a few favorite tiny dropper patterns handy. I have a third small box full of microscopic patterns of all kinds...
I guess it really depends on how many boxes you have! Don't put too much thought into it...you'll figure out how you like to organize them once you get some use out of the flies!
T
the_intimidator03
oh trust me... ive gone through a few prince's.... one of my go to flies for indicator fishin. I am lookin forwards to the opportunity to use the zonkers and bunny leach

GungasUncle
I've *tried* to keep my flies segregated before - but that just leads to "I need a bigger vest"-itis. So I wound up carrying an assortment in a medium to large size box (that just fits in my vest's main pocket) that has dries, wets, and nymphs on one side, streamers, hoppers, and other larger flies on the other. And I keep a small box that holds 60 soft hackle wet flies with me all the time. They get their own box, cuz they're cool like that.

I've also got a few small boxes that I keep loaded up with a mini selection like the big box - the boxes are small enough to fit in a shirt pocket or pants pocket so I can go light.

Good luck dude, it's an everlasting process trying to find the "perfect" fly organizing system
T
the_intimidator03
oh that elusive hunt for perfection. its a fantasy that can be so close. yet requires tweaking here and there all the time. I havent gotten into soft hackles yet.. but im still learning non indicator fishin with detecting fish takes. must get good graphite rod and good line... should help

GungasUncle
Don't need a fancy rod for nymphing or swinging soft hackles (though they are nice, of course). There's a couple ways I do it:

Tight line swing. This works for wets and nymphs. Just as the name implies, you fish a tight, relatively short line. You're in constant contact with the flies - any munching by fishies is instantly felt. At the end of the swing, I let the flies hang in the current - any fish that might've wanted to eat the flies, but were hesitant while they were moving may be tempted to eat once the flies are stationary. You can let them hang in the current a long time - and fish will still eat them.

Long line swing - similar to the tight line swing, but with a longer line. This is usually done by casting directly across, or slightly down and across and letting the flies swing on a relatively tight, straight line. You'll feel the pull if a fish hits. If you're on a larger body of water, you can actually cast upstream, so long as you maintain a relatively straight line, or a slight down-stream belly to the line. You'll see and feel the take when a fish hits.

The thing I've noticed with wet flies, especially soft hackle wets - is that the takes aren't normally subtle. Wets are really fun to fish And if you get hooked on wets, they'll take up more and more space in your box.
B
bigsteel
good lookin box,all you need is those stimulators and your golden
T
the_intimidator03
yeah ive only got 3 stimulators in there. thanks for the tip gungas.
V
Van
I've got a bad habit of buying too many boxes. In fact i have a whole bunch of the same kind you have and like them. However, it is a pain to find the flies im looking for. So, i am in the process of replacing them with the Upmqua UPG style boxes. Really like those. lol
T
the_intimidator03
I seem to know where each fly is. so that isn't an issue YET. besides running out of space id like to seperate them up a little so i know this box is such and the other box is for this.
B
bigsteel
I like to have 1 box dedicated for dry flies and soft hackles,and the second box is all nymphs and streamers
T
the_intimidator03
so far bigsteel its seeming that is a good route cause dont soft hackles imitate the upper spectrum of the sub surface?

GungasUncle
The neat thing with soft hackles - they can be fished in any part of the water column, even dressed with floatant and fished as dried. Crimp a split shot 12" above them and fish them as nymphs. Or just let them sink on their own and swim them through a run.
T
the_intimidator03
dont tell me that... i may need to go order more flies. LOL running out of room. *looks into box* aw shucks i got some space... what are some basic soft hackle patterns you would suggest?
You must log in or register to reply here.

If you had to choose

C
A River Runs Through It comedy-style