S
Socaaron
Recently the Wife to be sent me on probably one of the best wedding chores ever, go to the woods and cut some log slices(think wood plates) for our table centerpieces for our upcoming wedding.
Needless to say I was totally game and maybe didn't bother to mention the fishing rods I was packing in the back of my car...
I had a destination in mind which is kinda OFF the beaten path but which holds my "secret lake" and being lightly traveled was bound to have some logs or trees that needed clearing off the road with maybe a few extra slices ending up in my trunk so I wasn't woodcutting but just doing the forest service a favor!
Decided to do it the "man" way and drove up off memory rather than consult my map, suffice to say promptly took a wrong turn, but one of those wrong turns where you know immediately that you've gone wrong but continue anyway just to see where things go(I still had my map and GPS so I wasn't worried). Turned out to be a fortuitous wrong turn because short down the road I come across exactly what I was hoping to find, I medium sized tree downed across the road. Took car of things and turned around, after consulting my map realized my error and headed on to my destination.
Prepared my gear and started off on the "bushwhack" to the lake after carefully checking for the bear that I've rather routinely encountered, no bear but some semi fresh scat so I know he/she is still around.

A few things about my "secret lake" I only fish it a few times a year, it's rather shallow and gets quite warm which puts a lot of stress on the fish so I try to fish it only early and late in the year.
I like to think I'm the only person who fishes it but I've seen signs that other people are aware of it's existence but I try to do my part to keep fishing pressure as low as possible by limiting how often I visit.
I was actually inspired by a post from a fellow OFF'er bran_man a few years ago where he showed OFF a monster rainbow he caught in his "secret lake". So I sought out my own using a combination of "Fishing In Oregon", forest maps, and Google Earth images to explore those off the beaten path bodies of water that could be secret gems.
I've been monitoring this lake for the last 4 years and have seen a steady increase in the size of my catch, I am almost always a C&R or CPR fisherman when it comes to trout in the hopes that they'll be bigger in our next meeting. There aren't a ton of trout but those that are there are getting good sized

On to the lake... So I picked the what seemed to be the only day with poor weather last week and has treated to alternating, rain showers, sun , and gusting wind. When I got to the lake it was currently raining and more than a little windy so I started out with hardware. Much to my chagrin I had grabbed the wrong spoon box and was looking at a box full of spoons I use for steelhead. Selected a 1/3oz(ridiculously big for this lake) lil cleo and went to work. Not much action only managed a 8in'er before I had a good slam and brought in the fish the photo, which taped out at 13in' which was my record for this lake last year. By this time the wind and rain had passed and I started to see fish rising so I switched up to fly fishing. Not really sure what to use I tied on the most generic fly I had,the Adam's(I debated the Royal Wulf).
I've never still water fished flies before but I've lurked enough to think I understood the basics. I started casting towards where I saw rising fish(or as best I could the wind was picking up and I was really wishing I had my 5wt rather than the 3 for more casting weight and power) preceded with short strips and long pauses trying my best to mimic a fly trying to leave the waters surface. In a surprisingly short period of time I was rewarded with the sight of a beautiful trout inhaling my fly. Definitely felt like a good fish and was super stoked to discover that it was! Turned out to be a monster for this lake, taped out at a little over 16in and became my new non steelhead trout record(barring browns of course) and my biggest trout on the fly and with a new method to boot! A record that was soon to be broken but I'm getting ahead of myself. Continued fishing and nabbed another 10in'er on the fly and called it a day.
So on to this week, on Thursday I found myself free from work by noon and a fiance who wouldn't be off work till late and with all the gear still in my car from last week there was only one logical decision...TO THE LAKE!

On the drive my car got plastered with tons of bugs but it wasn't until I stopped for a potty break that I saw what they were, black ants, giant flying black ants, and finding them around the lake and the trout rising with reckless abandon well there was only one choice of fly.
Long story short I casted and casted and casted but always seem to be falling short in the face of the wind that seemed to change direction every 5 minutes. I managed one smaller trout in like 2-3 hours and was treated to the frustrating sight of some genuinely large trout completely clearing the water and falling back with huge splashed but always out of casting distance. I little disheartened but still enjoying my impromptu trip to the woods I was nearing the end of my day. The rises had tapered OFF and were now sporadic and scattered, but low not twenty feet from a large fish rose and snap turned with a splash. Why not I said that's in my casting distance. I casted right where I saw her rise and before I even started to prepare the first strip, SLAM! Fish ON! Now with smaller trout I usually don't even use the reel I just hand line them in, I find it easier than holding them tight while I reel in the slack before the reel even gets used to fight the fish, that was not the case with this one! I tried to give her line while keeping tension as I reeled in the slack and a good thing too for as soon as I got the slack reeled in she made a line peeling run, not once not twice but 8-9 times everytime I got her close zzzzzzzzzzz away she'd go.
Finally brought her, she measured 17in! I was absolutely torn between the release and dinner. The fight and warm water temp(felt like it was pushing the mid 60's) seemed to have taken a lot out of her, so rather potentially waste a gorgeous specimen she got the bonk. She seemed super fat so decided to inspect the stomach contents, which as my suspicions confirmed was packed with flying black ants so many I was surprised se was still eating!
So thats my story and you can see why I don't post often because it always seems to come out as a novel...lol
-Aaron 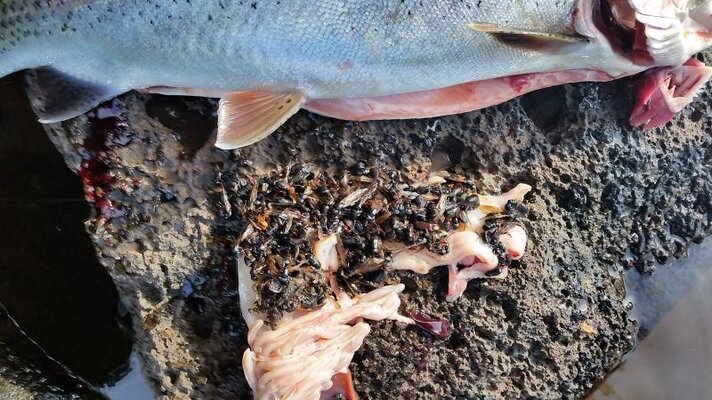 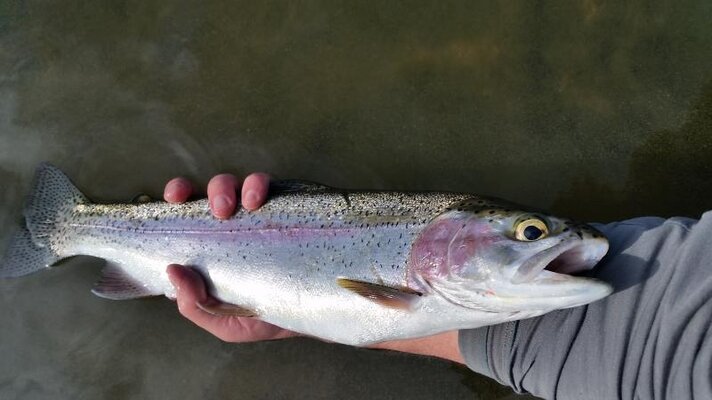 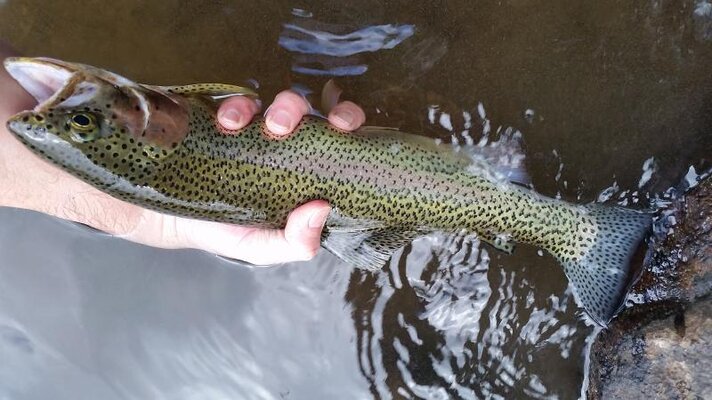 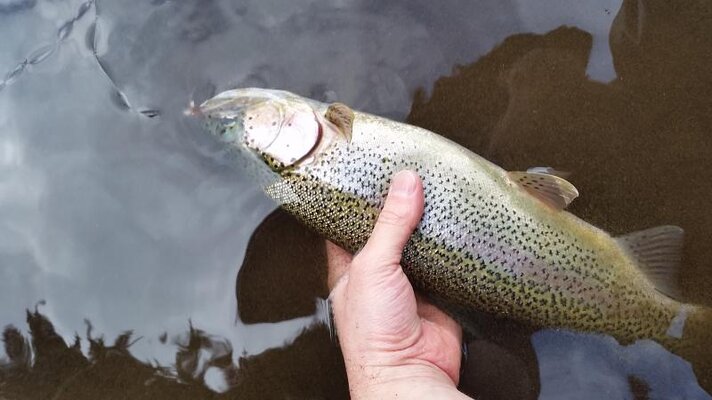 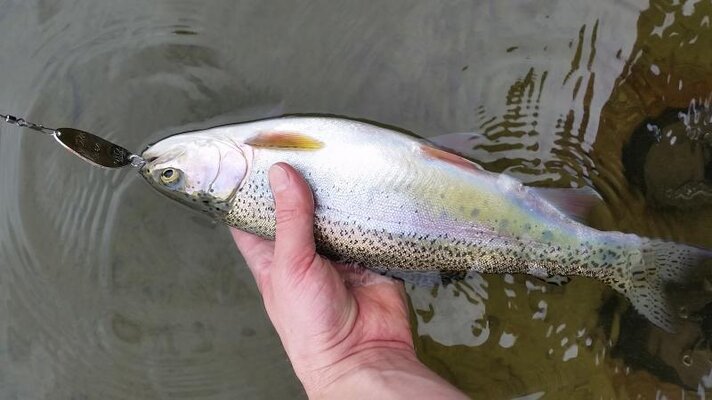 Hehehe you could try! But I am always looking for more fishing buddies!
You must log in or register to reply here.

H
A below average season for the high lakes so far