C
chris61182
Yaquina Bay is an enormous body of water which can take a lifetime to explore and uncover all of its secrets. I've only begun to scratch the surface and soon will be moving north and fishing Tillamook bay instead, so hopefully others will pick up where I left off.

For the bank angler the two jetties are often the focal point of a fishing trip as they are rather prominent and easy to find. To reach the north jetty park at Yaquina Bay State Recreational Site and follow the steep trail to the beach, then simply walk over the dunes to the jetty. From the bridge to the start of the boulders making up the jetty is a shallow water area which makes for great tide pooling on low tides and likely clamming as well though I've never seen clammers over there. If you venture out on the north jetty, be very careful, the rocks are treacherous even in nice weather, and large waves can break over the jetty and wash you off. And the cold water and fast flowing tides are likely to be dangerous, possibly even deadly for strong swimmer, let alone someone who isn't.

The south jetty is much more easily reached and offers considerably more safe places to fish. But don't under estimate its hidden dangers, spray soaked rocks are often covered in algae or worse seagull poop, and one can easily loose their footing. But I digress, now back to the fishing. Along 26th street you'll find a series of what is known as finger jetties which are renown for attracting rockfish, perch, and greenling. And for the more adventurous one can continue out 26th street and if you have four wheel drive and are confident driving through sand one can drive rather far out the jetty though many to prefer park closer in and walk the last few hundred yards to where the jetty starts to enter the ocean. The jetty is rather easy to navigate for about half of its way out into the ocean, but the further one goes, the larger the gaps between the boulders get and the more exposed to the ocean you'll get, so again be careful. The fish can be located anywhere the length of the jetty, and fish like the rockfish and perch will travel in schools so when you catch one there are likely to be others in the area too.

18406ej
What is the recommended bait/lure for working the jetties?
C
chris61182

18406ej said:
What is the recommended bait/lure for working the jetties?
Click to expand...

I hear baits work rather well, with the most popular being sandshrimp, clam necks, sand worms, and squid. Though I've also heard earthworms and shrimp from the grocery store work as well.

For myself I almost exclusively fish with lures as I never go through enough bait to make it worth buying. For me it's soft bodied swim baits, spoons, or plastic worms much like you'd use for freshwater bass, but the key is to keep things simple and cheap as the rocks will eat plenty of these.
M
Mokai
Here is a shot of the light house I took last week.. 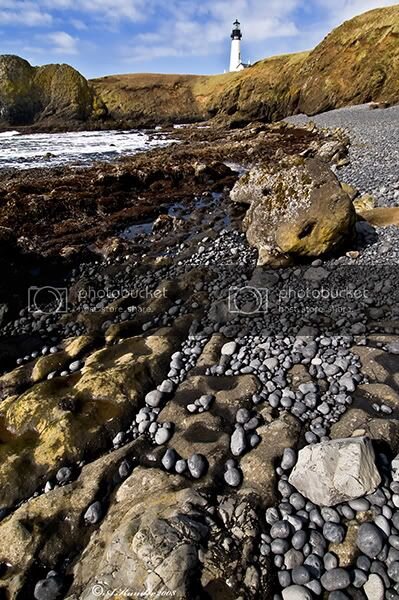 18406ej
Nice work as always...
D
DDR
Thanks for the info. Are there any other hidden treasure fishing areas for us novice salt-water/brackish water fishermen? May be heading out there this weekend.

Also, what kind of fishing gear should I bring? Specifically, rod action and line strength, hook sizes, etc. When it comes to soft plastics, what sizes are recommended? I've got lots of small ones that were brought over from MN that were originally used for bluegill and crappies. Even caught Northern Pike (large toothy critters, not the pikeminnow's of the Northwest) on them so I'm curious as to whether or not they'd be good in the bay.

And if anybody will be out there this weekend, let me know. Would love to get together with somebody in the know!
D
DrLoveFish
Bumping for a reply to the last request...anyone with just some basic gear suggestions for fishing off the jetties in Newport?

DrLoveFish said:
Bumping for a reply to the last request...anyone with just some basic gear suggestions for fishing off the jetties in Newport?

I would use a heavy rod also with a lite tip some times ya got to use a bunch of weight to stay down in mose holes in the jetty rock.

I also use old spark plugs for weights they are far cheaper then losing lead and boy oh boy yer gonna lose a lot of sinkers.


another way I have seen it done is when the tide is flowing to use a bobber and let you bait drop down and drift just outside the rocks the fish wll dart out and grab your bait.

You can find old ones many times around Tire Shops............
C
crusty old fisherman

Hawk said:
For weights you can also drill a hole in ol' wheel balance lead weights...


I pour my own leads and mak I think last time I got a 5gal bucket of used tire weights it cost me like $50 and I had worked for the guy for almost 10 years when I was younger.

crusty old fisherman said:
that also works but tire weights arent so cheap to get your hands on any more unless you work in a tire store


I pour my own leads and mak I think last time I got a 5gal bucket of used tire weights it cost me like $50 and I had worked for the guy for almost 10 years when I was younger.


Some years back i got used tires from mostly gas stations to strengthen my dam on the basspond, mixed with clay. Some of the tires came with the wheels & wheelweights still on em. I used fer surf fishin'......................