J
jewestcoast@hotmail.com
Wow. Last time I fished the Wilson River (about 2 weeks ago) I caught about 25 trout, only 2 of which were over 10 inches. Today started slowly but progressed nicely.

I arrived at my favorite fishing hole and didn't get a substantial bite for the first hour. I decided to move to a different spot and on my 3rd throw landed a 14" trout. It was one of the bigger fish I have caught on the Wilson and I was excited. About 10 minutes later I caught another nice trout that I estimated at 13 inches.

Moving downstream a little I caught a few more, somewhere around 10 inches and was having a blast. I was running out of bait (and was getting hungry myself) and decided to backtrack and throw a few more into the hole where I had caught the first two bigger trout. On about my 4th throw I felt a huge tug, set the hook and saw a flash of silver in the river. But I missed him.

Patiently I decided to give it 10 more minutes and just as I was about ready to leave I hooked a huge trout...I didn't have a tape measure but it must have been about 19 to 20 inches. This fish was huge and I caught him on pretty light tackle. After taking a few pictures (and a 15 second video of reviving and releasing him which was taken accidentally) I decided to head home. There would be no bigger fish caught today.

If it matters all of the fish that I caught today were revived and released to live longer lives, and possibly be caught by some of the fine folks here.

I had almost given up on the Wilson, due to the small fish that I always seemed to catch. Today was different and I am pretty stoked about it.

Gunga
Good job! I havnt fished the wilson in about a year. But it was a blast the first time i went. It was with my uncle Mark and thats where i got the nickname Gunga the jungle boy. What kind of bait were you using?
C
cddunn
Well done. I've been finding it difficult to get up early and hit the Wilson river lately.
B
brookie47
What milepost were you fishing near? I just got back from the Wilson myself and did very good on a fly rod. I caught around 30 cutts all were holding in long riffles in under 2-3 feet of water. Around 4-6pm the fishing turned on. The best fly I used was an Black Ant pattern with some orange on top to make it more visible. Nice job catching the big ones none of mine were over 11-12 inches.
J
jewestcoast@hotmail.com
I was fishing near MP 19. I had my fly gear with me but was doing so well I just stayed with bait. The 3 biggest fish were all taken from the same hole. Truth be told this is the first year I have tried fly fishing and I am not that adept at it...yet. I got there early, around 8:00, but the fishing didn't pick up for an hour or so. Home and happy by 1:15.

If anyone wants exact directions to this honey hole shoot me a PM. I will share it with you. There seem to be plenty of monsters to go around.

brandon4455
go to advanced in the edit post options and click manage attachments then add files. then hit upload when you have selected all of the photos.
J
jewestcoast@hotmail.com
The pictures are in an album in my profile. The title is Wilson River. Click on my name and you can look at them.
M
Modest_Man 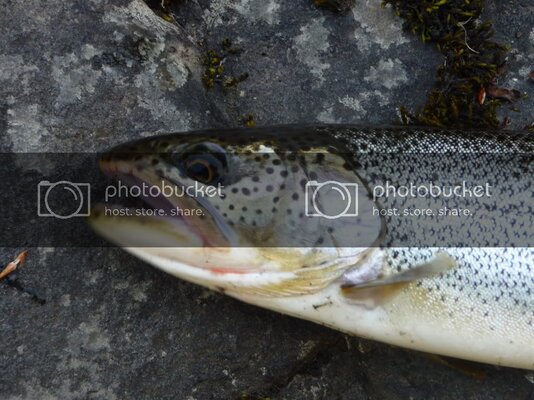 Admin
Wilson River Fishing
You must log in or register to reply here.