Understanding water levels is an important factor for planning your Wilson River fishing trip. If water levels are high, use brighter colors and run your lures deeper. If the water is low and clear, then try to stay back off the holes and eddies cast a little further as not to spook the fish and use more natural colored tackle.

The Ideal Wilson River Water Levels for both boat and bank fishing, range from 4.8 ft. to 5.4 ft. If you are fishing from a drift boat you have a little more flexibility and can successfully fish the Wilson River with water levels from 3.5 ft. to 6 ft. For bank fishing and plunking, 6.5 ft. and up are good as well. Current water levels are provided in the USGS graphs below. 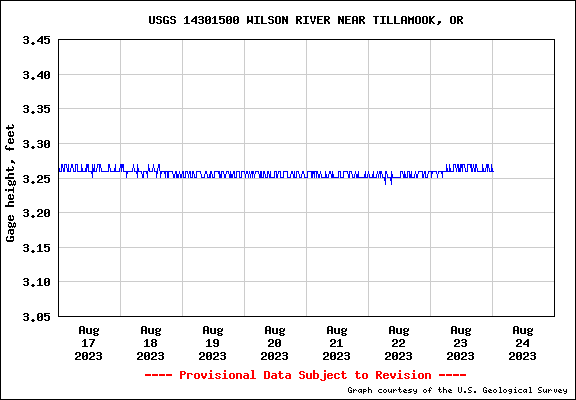 I drift from Mills Bridge to Sollie and I don't really like to fish it unless its under 5.5. But if our bank fishing you can fish higher up on the river when the gauge height is much higher.

I normally fish at 6000 to 900 cfs, depending on what direction rise or fall. Hope this helps someone. The tug is the drug
G

My fishing friend anytime is a good time to fish the Wilson. I have been fishing it for 50 year's and I have caught fish when everyone else stayed home. Any day on the Wilson is a Great Day!!!
O

The South Fork will fish when nothing else will. But the main river doesn't really start to fish until it drops down to 6.2 and that's fast water fishing.
Last edited: Mar 6, 2014
O

Grandpa Don said:
My fishing friend, anytime is a good time to fish the Wilson. I have been fishing it for 50 year's and I have caught fish when everyone else stayed home. Any day on the Wilson is a Great Day!!!
Click to expand...

I want to go fishin' with you Grandpa...50 years of experience says you can find them at any level!!

S--K What do you think the water flow is up HIGH on the wilson when the the gauge readings DOWN low are at 6-9K? Ever known the SF to be blown? lol! Tony.......Welcome aboard Grandpa Don. Lets fish it soon.

So the chart shows that fishing at Wilson river will be hot next week, right?
O

Little early for 'hot' but it will have decent levels. The rivers that see more early fish have the potential to be pretty good...
D

If you're going strictly by levels, the weekend looks awesome. But I'll defer to the guy that fishes it every day ^^^^^^^^. Run timing always varies -- some Decembers can be pretty hot, but usually the bulk starts showing up a couple of weeks from now... plus the river has likely been pretty cold, which slows them down.

But as Owin on Outdoor GPS always says "Hey Portland people... there's more than one river on the North Coast."

There's another river with a highway running alongside it that usually gets a decent shot of early hatchery fish (maybe even a couple of them).
You must log in or register to reply here.