C
Combat Chuck
Howard opens this weekend. Ive grown up fishing here with my family till I left for Albany. Im not 100% but I might be heading down just to fish here opening morning. Anybody else gonna be here or in the area Saturday morning? Sounds like its still got a good snowpack so Im gonna freeze my butt off!
S
stoutstackle
i might go depending on the weather. from what i hear they still have 6 feet of snow up there
C
Combat Chuck
Just got a report... the lake has frozen over. I guess they are attempting to get some sort of a barge in the lake... but first they have to find the boat ramp :lol:
O
osmosis
Don't forget your tire chains if you head up there for the opener haha
S
stoutstackle
oh forget it there is no way i am going that far to freeze and have to ice fish for some little hatchery trout. i will go bass fishing instead some place warmer
D
doublestrike
Steve and I went up to Howard Prairie today. We launched at Klum Landing about 7:10 and the weather was gorgeous. We threw in our usual trolling gear and trolled toward the island. The water temperature was 60.7 at the boat ramp. We had only gone a short distance when Steve hooked into one. He reeled it up and it self-released just as he was bringing it over the side. Looked to be a nice 12 incher. He was using his Panther Martin Lake troll, with a Live worm. I put on my (same stuff) except I put on green glitter powerbait, and was getting hit 3 to one, and catching my share too. We threw a lot of them back and just kept the bigger ones. We trolled passed the island on the west side and continued catch and release the smaller ones keeping just the nice ones. Precisely at noon the wind came up and we tried our luck at "Sail-Trolling". We ran upwind and wind-drifted back towards the island about 4 times, each time we were getting hits but no real hookups. It seemed a little fast at 1.8 to 2.0 mph, so I decided to get out the lead-core and needlefish and got hit and caught a couple of small ones at 4 colors out. I put on a BIG Fire Tiger needlefish , with a 1/2inch chunk of worm and tried it at 4 colors. In the mean time Steve's pole tip went into the water and he played a real nice fish up to where we could see that it was a REAL nice one, so I got the net and we bounced it around and finally got it into the net; a17 inch Fatty. It was the one he had been looking for all day. That was #9 in the live well and shortly I hooked into a 'puller' that went 14 inches and he too was a fatty and that concluded our catching activities. 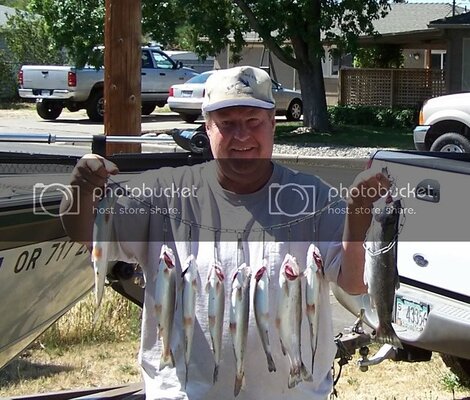 Rick with the catch, 17" fatty on your right. 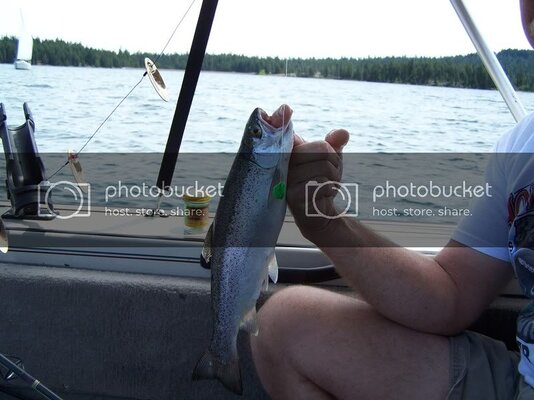 Steve with the fatty. 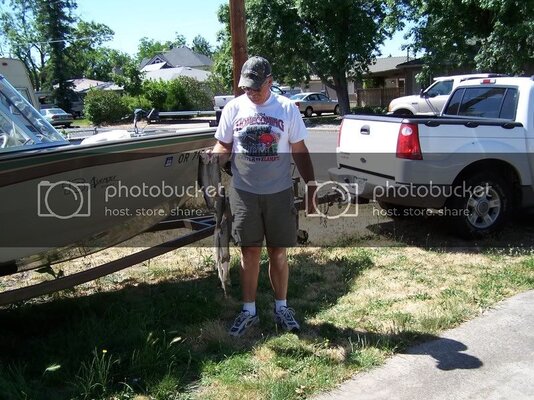 Steve with the bunch.

Great report and some very tasty-looking fatties! "Self-released"... I love it! :lol::lol::lol: Thanks for both as well as the laugh I needed.
Barb

Thanks so much, I haven't been down there is quite a few years. Some great memories around the island... Very nice stringer of dinner...thanks for the pictures..

Chuck
You must log in or register to reply here.