Sturgeon fishing has been good!

bass
I have made two fishing trips in the last month, one was on October 23rd and the other on October 30th.

The focus of both trips was sturgeon, although on the 23rd I spent an hour or so fishing for smallmouth and managed two that were both around a pound.

These were my first trips of the season out of Swan Island. The high river conditions and amount of junk in the river forced me to skip my upriver forays and fish the relative safety of the harbor mouth.

I had forgotten how fickle the fish in the basin can be and I had to re-learn that lesson (like I do every year).

On the 23rd I launched by 8am and headed out to poke around the harbor with my friend. We marked some good congregations of fish. We were talking about leaving when my friend hooked a decent sized fish that fought like a demon. He had the fish most of the way in when I hooked up. My fish was not as good as his and for some reason we decided to leave that spot since the bites we did get were so slow in coming.

We were really confident that we could find a hot bite elsewhere so we continued out to the mouth of the harbor to explore. We tried many different spots and would catch a fish or two, but we could not find the hot bite.

Finally, about midday, my friend decided to head back into the harbor. I decided that the debris was not too bad so I headed downstream a ways out to the edge of the current.

Turns out we both found good bites. Unfortunately for me, mine was a shaker fest with lots of little fish. Still, the action was fun since I would get bit within seconds of my bait hitting the bottom. After a couple hours though I tired of constantly reeling in small fish. In the two hours on that spot I caught over 20 sturgeon, but only 3 would have been borderline keeper sized.

As I got closer to the harbor mouth I radioed my friend and he said that he had a good bite going with mostly keeper sized fish. I told him I would join him after fishing one more spot.

That last spot turned out to be pure gold for me. I was near the harbor mouth near the edge of the current and there were a ton of good sized fish there. In the last hour and a half I landed 5 more fish but they were all between 4 and 5.5' long.

The bites came fairly quickly, but each fish I caught would end up pulling me far from my anchor spot and take a good bit of time to land and then get back to my spot and get back on anchor.

I definitely spent more time off my anchor being dragged around than sitting on anchor waiting for bites. 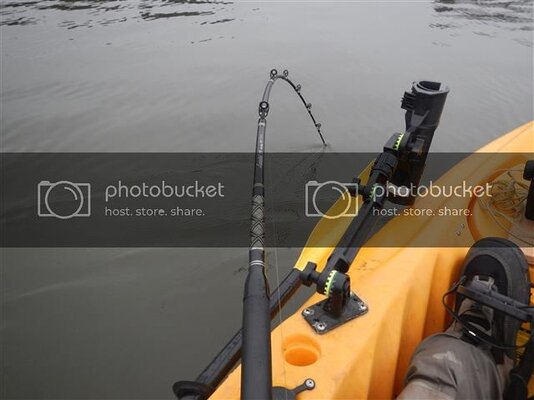 Here is a nice pic of my biggest: 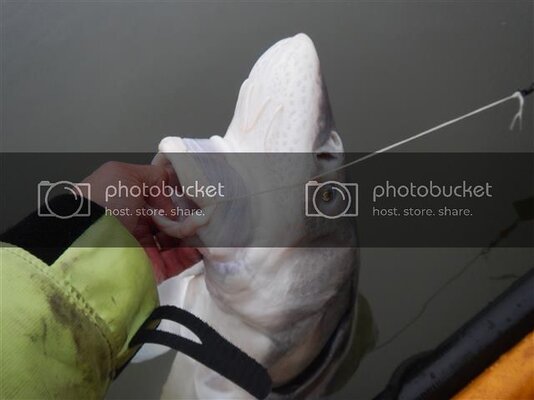 On the 30th I met up with my friend again and while I was better mentally prepared for the finicky harbor bite it still kicked my butt for a while. We were marking so many fish it was crazy. However, each time we stopped we would feel lots of line rubs (because there were so many fish) but we could not find any biters.

We moved again and again and again. Eventually we made our way out to the harbor mouth and tried various spots in the current. Occasionally one of us would stop at a spot that would cough up a small fish, but it was slow. Once again, we had started the day so sure that we would rule the river all day that it was stunning and humbling to be ignored - I think I understand how Hilary feels

However, the thing with fishing is that if you beat your head against the wall long enough you can eventually break on through to the other side. I don't know if I am good fisherman, but I am a stubborn one and willing to spend all day in my kayak if that is what it takes.

By 1:30pm I had only caught 11 fish (one barely keeper sized) in nearly 6 hours of fishing. My friend and I had parted ways a while earlier. I kept moving around the harbor mouth and he went back into the harbor.

Eventually we chatted on the radio and he told me he had found some biters so I went back to where he was fishing. I tried a couple of spots near him with a little success when I got on that magic pod of biting fish.

That is the funny thing about the harbor. You can be 100' from someone and be slaying them and they are not getting a bite. I have been on both sides of that situation and let me tell you, one is way better than the other.

At first he was getting the bit pretty regularly, but It seemed like the better my bit got the more hist spot died down. I fished until just before dark when I ran out of bait. I caught 26 sturgeon from that one spot and they were still biting like crazy when I left. Lots of good sized fish.

My best of the day was a 5' fish that made a nice jump right in front of my friend. I love those moments when you see that line angle rapidly shallowing and you know that big fish is going to jump. I yelled over to Brian and we both whooped really loud when that big girl came out of the water. 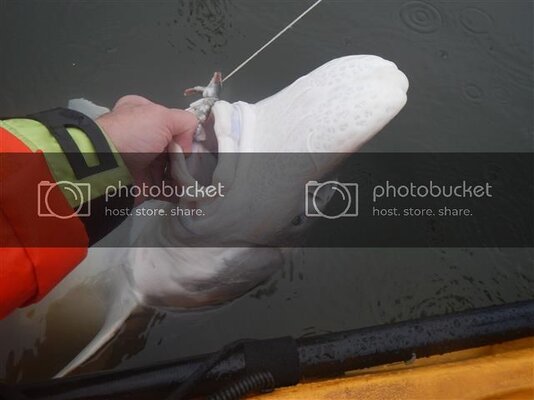 The bite was so incredible in the spot I was on that I could barely cast out and set my rod down before getting another bite. Just non-stop action until I ran out of bait.

When I was loading up the truck at the end of the day my left hand cramped into a claw so badly that I had to pry my fingers open with my right hand. I was so sore the next day at work, but man it was a good sore. That is a good day of fishing!

One last thing I found interesting. After I ran out of bait I spent some time pedaling back and forth over the area. There was nothing special in terms of numbers in the spot I was on compared to the surrounding area. There was no difference in bottom, depth, number of fish, orientation of fish, etc. I could not see a single reason that one spot was so red hot and yet a 100' away the bite was slow.

I will also say that the sideview of my Garmin 73sv is really cool for seeing sturgeon. It is wild to be able to see and mark individual fish. Heck you can count how many fish there are. Plus, since that sonar adjusts the scroll speed based on boat speed you also get a reasonable guess at the size of the fish that, based upon the fish I caught at various spots, seemed pretty accurate.

Raincatcher
You have the greatest adventures and your reports are the best! Thank you for sharing with us!

plumbertom
I have a question about fishing those dinosaurs. Do you use an additional weight on the leader near the bait to keep it on the bottom in moving water? I've been told that if your bait doesn't stay on the bottom you aren't fishing for sturgeon.

plumbertom;n600125 said:
I have a question about fishing those dinosaurs. Do you use an additional weight on the leader near the bait to keep it on the bottom in moving water? I've been told that if your bait doesn't stay on the bottom you aren't fishing for sturgeon.
Click to expand...

No, just the normal slider with a weight above a barrel swivel.

However, the heavier the current the shorter the leader that I use. I am usually around 1.5' but I will go to a foot or less in heavy current. In general, the few inches just above the bottom have little to no current in any flow. Shortening the leader is more to make sure the bait does not twist up the main line as it sinks after the cast. Once it is on the bottom it will just lay there. The other thing to take some care with is to make sure your bait lays straight enough along the line of the hook shank and leader to not spin in the current (once again to avoid causing the leader to twist up and tangle while the bait sinks). I test this beside the kayak when fishing in moderate to heavy current. Just drop it over the side and make sure it hangs still in the current.
You must log in or register to reply here.