I was at Hagg with a couple of friends from work today, from 5 am to 8 am types. Fished near the dam, a pretty nice bunch of little trouts but nothing to write home about the fish.

However, we met one gentleman there who was pretty vocal about a sturgeon that he saw swimming by the dam on Tuesday 5/10. He was super excited about it when he told us about it at about 6 am, and he was super excited when he told this to the next 10 people who trickled into that place, in a foghorn voice too. Seriously, if that sturgeon had shown up again my buddies probably would have thrown me at the fish, I was playing guide today and that fish took away all our planned quiet time.

Apparently someone caught 9 juveniles somewhere and released them at Hagg!

Anyone else seen one of those?

* The full Monty rig didn't quite produce today, little ones kept stealing my night-crawlers.
B

I'm not saying no, but take it with a grain of salt, I have heard stories previously of sturgeon being illegally planted so it is entirely possible but seems pretty unlikely. Usually the louder those guys are, the more full of it they are too. I hope you find a definite answer
M

I've heard those rumors for years and always thought that it was possible but highly unlikely. However, a friend who fishes there all the time was at the dam Tuesday and sent us these 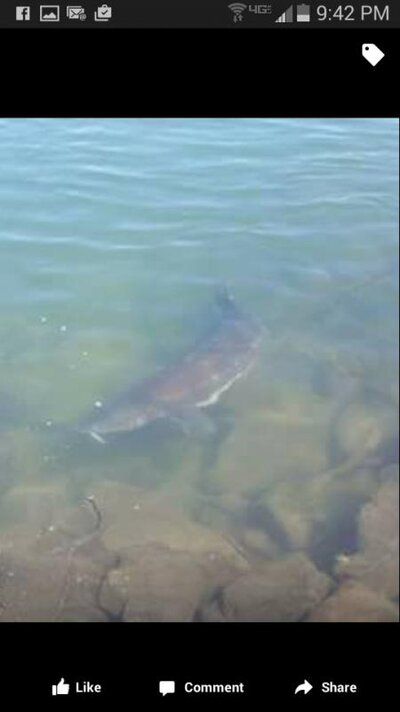 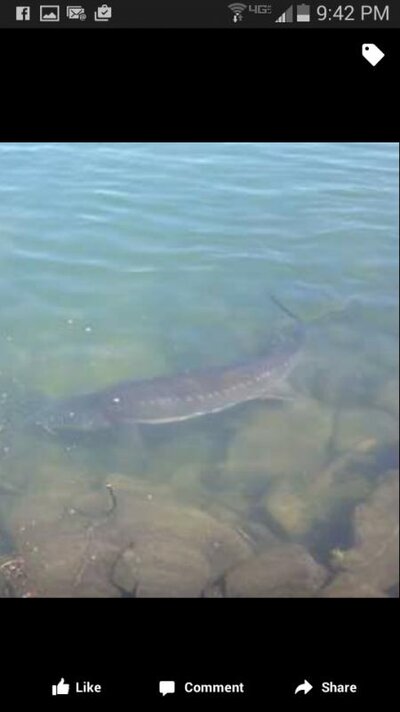 Sent from my SAMSUNG-SM-N910A using Tapatalk
B

Well that is that then, provided that it is Hagg lake, which it looks like to me. Wonder if it was planted or made it up the system before impoundment. He looks big enough for either. Keep in mind that looks alot like many columbia sturgeon spots too though.
Last edited: May 13, 2016

Most Featured
I have heard rumors of sturgeon in Hagg and it is certainly plausible. They live for hundreds of years and there is plenty of food just from dead stockers.

The photo is definitely of a sturgeon in shallow water. The question for Masin is if your friend is the type that likes to pull your leg. I know they often come in close like that on the Columbia during the shad run.
M

Tuesday, by the Dam, from two different sources. I think we need to see if Masin is pulling one in me actually..

I might buy in to this if I could see more of the dam or lake in the pic. For now, I will still insist you would look a little silly sitting on the hook by the dam with a sturgeon rod in your hands.....
E

I see no way a sturgeon could make it into Hagg. So self implantation, highly unlikely. Someone putting it in there, sure. I don't see it getting out either. The big question is could it survive? What is the average depth of the lake? If it gets deeper than 80 feet, then sure, it can keep cool in the summer. I'm sure that there is a good enough food supply. The only thing that makes it seem unlikely is that the size indicates it has been there for several years. In that time nobody has hooked into it? I know for a fact that the will take a crawler, and I bet people fish with them on that lake all the time. Curious. . .

Sent from my XT1254 using Tapatalk

espencer757 said:
I see no way a sturgeon could make it into Hagg. So self implantation, highly unlikely. Someone putting it in there, sure. I don't see it getting out either. The big question is could it survive? What is the average depth of the lake? If it gets deeper than 80 feet, then sure, it can keep cool in the summer. I'm sure that there is a good enough food supply. The only thing that makes it seem unlikely is that the size indicates it has been there for several years. In that time nobody has hooked into it? I know for a fact that the will take a crawler, and I bet people fish with them on that lake all the time. Curious. . .

Sent from my XT1254 using Tapatalk
Click to expand...

X 2. A fish that size is advanced, in years. And it's never been nabbed, before now? Highly suspicious.

And if BASS hasn't caught it; then it HAS to be someone's (ganja-induced) pipe dream!
M

Worms do work for sturgeon. However, they haven't been hooked because people aren't fishing 4/0 hooks in Hagg. I do know of a few guys that have hooked up with something really big in that lake and got broke off. I am one of them. Floating a worm just off the bottom in around 38 feet of water, 20 lb. braid with 10 lb. fluorocarbon because I was out of 8, and got into something that yanked my rod so hard it broke me off as well. Just thinking that there may be something in that water that no one has known about and just haven't targeted them yet. How long ago were these fish planted? We need some facts here. Im not saying Im going to go lay a herring on the bottom any time soon but, It sure is tempting......opcorn:
M

Believe me I've been extremely sceptical about these rumors. We were out there today and people at the dam were still talking about it. As were the folks at the Lake Stop grocery store. So no shenanigans on my part.
T

MrGrumpFish said:
Just thinking that there may be something in that water that no one has known about and just haven't targeted them yet.opcorn:
Click to expand...

I wonder if Washington County Parks & Rec peeps, know anything.

Not like going down the pond chasin' bluegills and tommycods. This Haggus, swallow you whole.
Last edited: May 14, 2016
B

I may have to put a few hours in with my 65 lb braid. I imagine it would be catch and release per the standard zone regs, but I might poop a little if I can hook a sturgeon there.
T

Rumor has it that Haggus has a hankerin for the broasted chicken from the LakeStop store! You just need to buy it before Bass and Zach show up. There is a reason Zach is called the Chicken Hawk.
G

I was fishing there Tuesday - and the pix Masin posted were also sent to me by my mom. One of her other fishin' buddies is the one who took those pictures. There were half a dozen folks out there Tuesday and Wednesday who said they witnessed the fish come up into the shallows.

I've heard stories about sturgeon in Hagg ever since I was a kid - been fishing there now for 30+ years. I have hooked fish in that lake that snapped 8lb test line like it was nothing, and I've busted off 12lb line on fish like it was nothing - both times fishing worms on the bottom in deep water. There have been big fish of all varieties taken from that lake - there's been big cats pulled out, a number of record bass, huge trout, an uncle of mine even pulled a 13 inch yellow perch out of there once (yes, I saw the fish - my grand dad and I were in the boat with him) - and it's not impossible at all for someone to plant them in there - either by retaining fish caught elsewhere and transplanting them, or by introducing them as babies. There was an aquarium supplier on Farmington Rd. in Aloha that had a pair of sturgeon in their pond in their back yard, and they had a 50 gallon tank full of baby sturgeon for sale - hundreds of baby sturgies in that tank. It would've been nothing to buy a few dozen and release them - and it's possible someone did. My grandparents had a friend when I was growing up that had property out near Buxton, and he had transplanted sturgeon into his ponds - they were his pets. One of his pets was 8 feet long.

The fish in the picture appears to be about 6 feet, judging by the average size of the rip rap along Hagg's dam.

I guess unless you see the fish with your own eyes, or it gets caught and kept in front of witnesses there will always be suspicion about it. ODFW still tows the line that there are zero Kokes in Hagg - but I've pulled a handful of them out of that lake over the years since I was a kid, and know others who have as well. Government agencies don't like to admit to their "mistakes" so if a stocking truck full of kokes accidentally got dumped in there years back, or some kokes wound up in a rainbow tank somehow - so what, right?

The only bad part about sturgeon being in hagg is that it means the bucket biology brigade won't stop messing with things.

To say that sturgeon never would've been in the streams, or never could've gotten there - I don't know about that. Scoggins Creek feeds the Tualatin - and there are sturgeon in the Tualatin - though they are rarely caught. There would be little stopping a sturgeon from going all the way up to Lee Falls on the Tualatin, and there are no impassable water falls on Scoggins Creek to keep a sturgeon at bay. There are coho salmon and steelhead that spawn in the spillway of Scoggins Dam - a treat to witness. Scoggins Dam was originally supposed to have a fish ladder but the feds cheaped out and didn't build it - if they did we'd have runs of steelhead and salmon up into Sain and Scoggins creek - and an interesting salmon fishery in the lake for sure.

That sturgeon being in there might make me break down and get my 2 rod endorsement this year, and keep a "meat line" out while I'm tossing lures for bass or panfish. I'm thinking a standard slider rig with a big hook and a hunk of herring, shad, or a perch fillet would be just the ticket if that fish is in the mood to eat. I"d probably spool up with 50lb braid and run a 15-20lb flourocarbon leader for good measure. I'd be a hoot to get that fish for sure.
M

I've heard Haggus can make a wake big enough to capsize a boat.
You must log in or register to reply here.
Top Bottom