I fished Henry Hagg Lake on Saturday, March 16th and it was a beautiful morning. 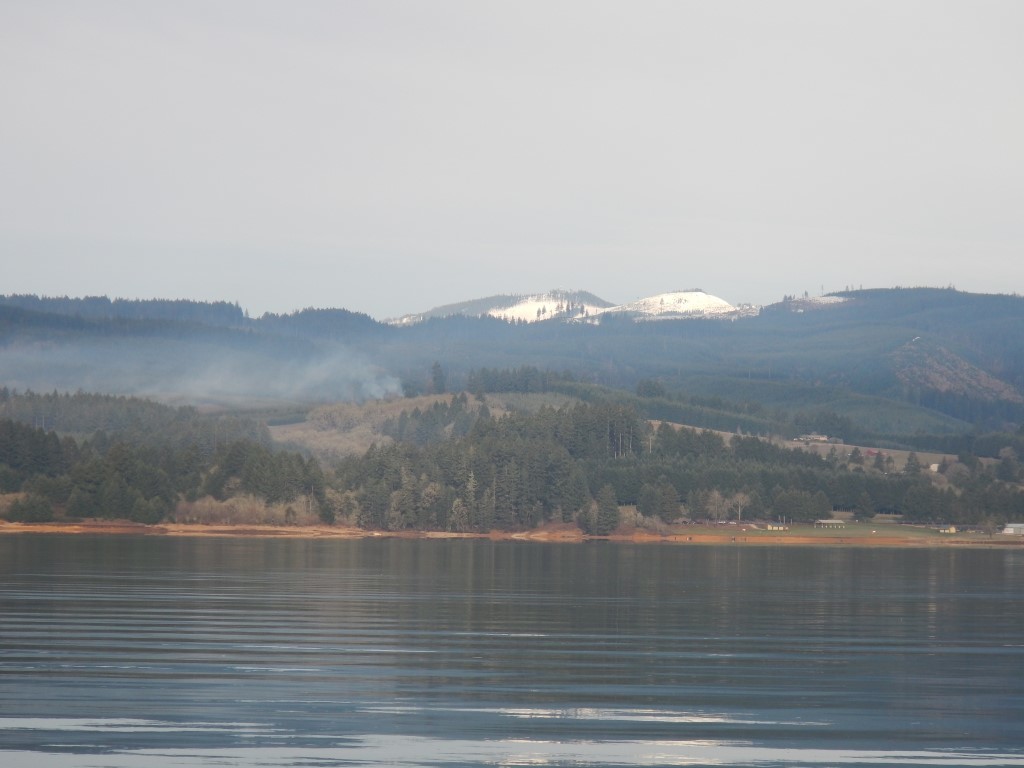 The bite was just outright insane. The fish were incredibly active and were rising and feeding on the midges coming off all day long. I ended up with 47 landed, mostly 10" fish with a 1/2 dozen or so in the 14" range. 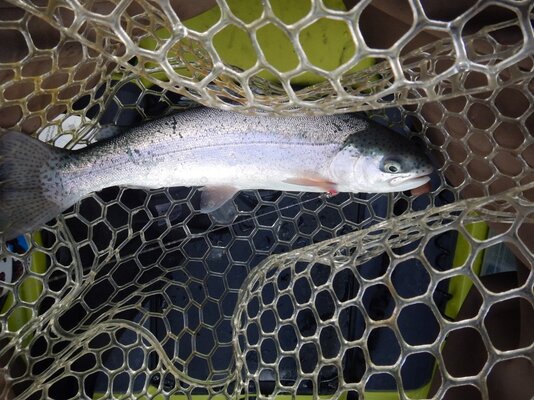 and one 18" pig that was so fat it looked deformed: 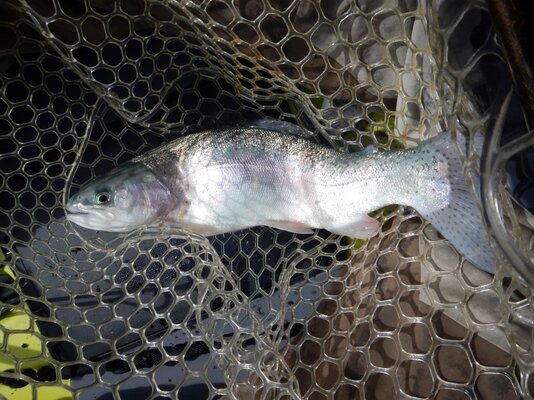 I launched at ramp A and spent the day (8:30am-4pm) between there and the dam. In the morning the fish were bunched up more tightly and in huge schools. I would troll along and both rods would go off. I hooked up doubles more often than singles. I only landed 2 doubles though because it was difficult to keep pedaling while unhooking the first fish in order to get to the second rod. I did not mind.

I was trolling my usually 1/24 oz roostertails in pink/silver and green/gold with 1/2 nightcrawler 50' back with a 1/8oz dropper. Both colors were bit hard all day long. At some point in the afternoon I decided to pull in one spinner and put on a tiny crankbait (Strike King Bitsy Minnow) in Sexy Shad which looks like a bluegill fry. The first fish I caught on this was a 14" beauty. Next was the 18" pig. I only caught 6 fish on this but 4 of the 6 were good sized.

The little crankbait got banged about as often as the spinner by the smaller fish but the hookup rate with those was very low - which is what I wanted. When the better fish hit it they hit really hard and buried the rod. Really awesome.

It was interesting that by the afternoon the fish had spread out as compared to the morning. You could see them dimpling about as far as my eyes could see out to the middle of the lake. In the afternoon I had fewer doubles but it seemed like I could get bit where ever I went.

The water color was nice and the morning temp on my unit read 41 and by the afternoon read 47.

That was my first day trolling with my new Outback (usually used my NuCanoe with an electric in the past) and I really like felt like it was a great platform. I will say that my legs were a bit tired after 7 1/2 hours of pedaling but its a small price to pay for a day like that.

Nice report. I've still never made it to Hagg. Is it busy now?

Yet another stellar day; and a great write up. Made me feel like I was along for the ride.

BTW that 18" appears to be a newly stocked fish (not a holdover). And you're right it looks deformed. Crazy man.

C_run, there were plenty of boats on Hagg but the water was not super crowded. When I got to Hagg there were only a couple of boat trailers at ramp A. I was dreadfully slow getting launched and by the time I got on the water at 8:30 there were probably a dozen or more. There may have been 30-50 boats out (I am really guessing). The area I fished probably had half a dozen boats trolling in the general area at any given time. But that is not many boats for 3/4 mile stretch.

Also, if any area gets crowded there is always tons of empty water.

Hey TD, I have no idea if it was a new stocker or a holdover. It was pretty silvery which I figured would make it more likely to have wintered over. The smaller fish had stronger pink lines which I always have taken to mean more recent stockers. That was always my guess but there is certainly no science and not a lot of thought behind it. Also, I know bass can change their pigmentation in about a day or two so perhaps my whole color theory is worth even less than you paid for it

A telltale sign of a hold-over is different colored bands, across the caudal fin (from top to bottom). At least that's what Sherry, at the Lake Stop Grocery store, showed me several years ago. Each band equals one year of growth. Just like the rings of a tree.

If anyone knows that to be incorrect--or knows of other ways to spot a holdover--please chime in.

Cool. I never knew that.

@rogerdodger do you know if that is how to spot a holdover trout?

I will say that it does sound a little unbelievable but it definitely could be true.

troutdude said:
@rogerdodger do you know if that is how to spot a holdover trout?
Click to expand...

nope, can't help on that.

as for the report from Bass, he had me at "new Outback"....isn't the glide just amazing? I am just dying for the ocean to settle down so I can take mine to Simpson Reef.

Thanks @rogerdodger. It was worth a try. Maybe someone else can help.

@bass Sherry had just weighed an 11.32 pound 29" 'bow, at her store. Then she held it up to bright light, and pointed at it's caudal fin. All across the end of the fin, was a darker colored band versus a lighter colored band just ahead of it. Or it may have been the other way around. With that one change in band coloration--she said it meant that it was a one year holdover.

Again...I do not know if that is really correct. It's just what she told us. But I've never confirmed that with a Fisheries Biologist or anything like that.

Roger, the new outback is amazing. It is hard to pedal slow enough to troll at 1.3mph. So fast compared to my older outback. All the storage as well. Turns so much more sharply. Crazy big improvement.

Your videos were a huge motivation for getting it! Thanks for taking the time to make them. U can also attest that the stability was awesome in catching a 6.5' sturgeon last month. The reverse really helped me to whip that fish.

Thanks for explaining TD. I definitely plan to try to research this.

You betcha buddy. I'd love to know what you discover; either way.

You know I am not a secretive guy

I had another great day out on Hagg on Sunday, March 31st. There are so many fish in the lake right now. When the wind dies you can see them chasing flies all over the lake. They are in what I would call loose schools but the schools are spread all over the lake.

I ended up with 44 trout on the day with about 10 of them being in the 14" range. I think the smallest I caught was about 11" and even those seemed to be reasonable chunky. Last time out I fished out of boat ramp A but this time I launched at ramp C just to try something different. I spent the whole day in the no-wake zone and the fish are as thick back there as they are closer to the dam.

This was my first of the day and typical of the size of the smaller fish: 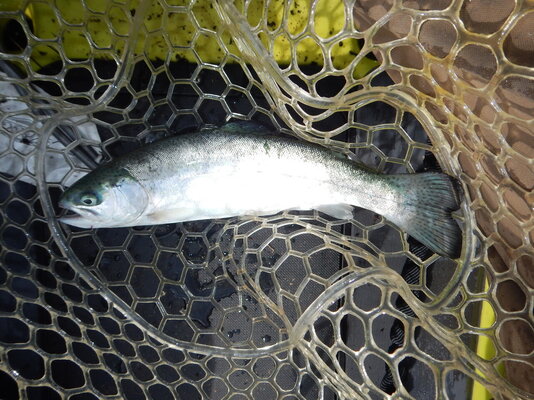 This was the size of the nicer fish: 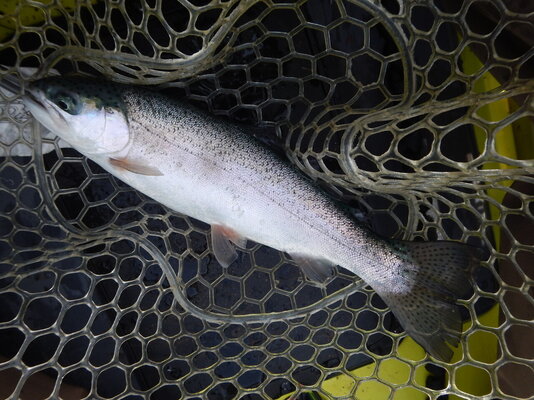 I did run into a school of nicer fish that I was able to stay on top of for about 1/2 hour before they spooked. I ended up catching 6 of the 10 nicer fish during that period. I tried a micro plug for a while but I did not hook anything on it. I spent 90% of the day trolling 2 spinners. I kept my speed between about 1.1 and 1.6mph. The exact speed did not seem to matter too much.

I did hook one beast that was probably in the 4-5lb range. That fish was crazy and spent the 30 seconds I had it hooked almost completely in the air. It seemed like it would just kiss the water and be back into the air. On the last jump, he through my spinner about 20'. Just a completely loco fish.

I made a small video early in the day. It shows me catching a couple and missing one bite. The end of the video shows me rigging my roostertail with the nightcrawler in case anyone is interested in seeing that. The action during the video is pretty typical of how the bite was all day long when I around a school (which was most of the time).


I think the longest I went between bites was probably 10 minutes. My strategy was to mark the location when I get a couple of bites and then make a second mark when I stop getting bites (while going straight). Then I would circle around and troll back and forth through the marked area until the bite stopped. Usually, I could make a bunch of passes through an area before spooking the school. I do think the kayak is particularly stealthy and good for this approach.

Also, I wanted to point out that the boat rentals are happening at ramp C again. The place is now called Robinson Family Lake House. I got a burger there for lunch and it was pretty darn good. It also looks like they sell some fishing supplies as well.

Lastly, I did spend about an hour and a half in the afternoon chasing bass but I did not get any love. The afternoon water temp in Tanner Creek arm was around 50 on my FF versus 54 in the main lake. I think my FF usually reads about 2 degrees cold. I was surprised I did not even get a bite. Perhaps I was fishing too shallow. I thought for sure some fish would be up looking for a meal but if they were they did not like what I had on the menu.

Golfbum, I am not sure if you were out on Saturday or Sunday. I was there on Sunday.
G

Nice. Someday I will get to Hagg.

Thanks guys. The trout have been feeding well on insects on the surface for a couple of weeks now. I think you could really clean up with a fly rod and midge emerger, about at #14 or #16. I keep thinking about taking my fly rod but if I take any more tackle with me I will probably sink straight to the bottom

bass said:
I keep thinking about taking my fly rod but if I take any more tackle with me I will probably sink straight to the bottom
Click to expand...

Well said Obi Wan! ROTFL! Thanks for showing how you rig the worm trailer.

P.S. My favorite trolling rods right there...Lamiglas fiberglass 7 or 7.5 footers with light action tips. Are yours the Jared Johnson signature models? Also...your reels look like D.A.M. Quick models. Am I correct?
You must log in or register to reply here.