Drifted the Willamette again in the evening. We got into tons of Cutthroats and Rainbows including a nice 15 inch rainbow. And this 22-23 inch native Bow, just shy of the legal 24 inch. Catching and releasing it felt way better. 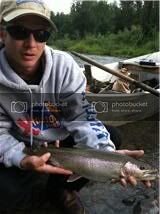 The fight was awesome, saw a great lane on the other side of the drift boat (my friends side) seeing that he was dealing with tackle and being the great friend I am, I said "your missin a nice run" and tossed my gear in.....I hear fish on, our buddy behind us yells..just after realizing he was in a fish, I'm hooked up.....this fish ain't coming down river. We slammed the brakes on the drift boat, after a nice aerial he works his way back to the front of the boat, we bring him over to a nice rock bar for some good old CPR! his tail had a crazy notch cut out of it, pretty much looked as if someone snipped off the tip of his tail fin....hard to see in the pic.
L

I didn't know you could fish for trout in the Willamette is it lures only and c and r? Can you catch some from shore? Where would be a good spot to try?
B

mgman6000 said:
I didn't know you could fish for trout in the Willamette is it lures only and c and r? Can you catch some from shore? Where would be a good spot to try?
Click to expand...


yes you can fish for trout in the willamette,,,,CHECK YOUR REGS,,,yes you can catch trout from the shore...pick a place and go explore
N

thanks guys.....oh and bigsteel said it best.....go explore! its half the fun
B

Beautiful fish! Sounds like a heck of a day on the water!

MGman...Check your reg book, may have different reg's for different sections.
Last edited: Jul 19, 2011
A

That looks like a great picture! If it only were a bit larger so we can see the nice fish in its full glory...

thanks Beaverfan, troutdude, and airs98, ya i wish my friend would have done it on my camera, sometimes his makes it load on the computer funny (unclickable)
You must log in or register to reply here.