As I've stated before, I'm coming back to fishing after having been out for a number of years. So far my fishing "outings" have only been for maybe an hour or 2 at the most. Kids, work, wife & weather has kept me pretty limited.

But this Saturday I've got lots of time, and the weather is supposed to be nice. I'm willing to get up early and drive up to about an hour to be at my spot at sunrise and spend a good chunk of the day there.

Having read up on, and bought a decent selection of lures and techniques I'm ready to hit it. I'm just hunting trout.

I just don't know where to go? Thought about heading south and hitting Alton-Baker, working up to JCP and EE wilson. Also thought about driving out 22 and working my way either Up or Down N. santiam.

Any thoughts, or opinions?
B

the santiam is only open above detroit, and the breitenbush arm is also open. id head that direction. youd have breitenbush and upper north santiam for stream fishing, and big cliff/ detroit for lake fishing, all within 15 minutes of eachother, and only an hour from salem. good luck, Brian
T

yep- Detroit Lake- 1 hour from Salem. Go to the Santiam Arm- when you see the "big rock"- fish anywhere around there. Always good fishing there.

Thanks everyone. Upper Santiam & Detroit it is. I think deep inside I was kinda leaning that way anyways.
B

let us know how u do
M

bigsteel said:
let us know how u do
Click to expand...


I will. I'm was thinking I'd take a camera with me, but I'm going to be by myself so I don't know for sure how that would work.

Guys... I had a terrific time this morning at Detroit and the Upper Santiam.

I was actually thinking about what I would say in this post while I was out fishing.

I'll try to not ramble on TOO MUCH...

I arrived around 6:45 and had opted to fish the Big Rock area. I pulled over off 22 and walked down the bank across the water from the dock and the rock. 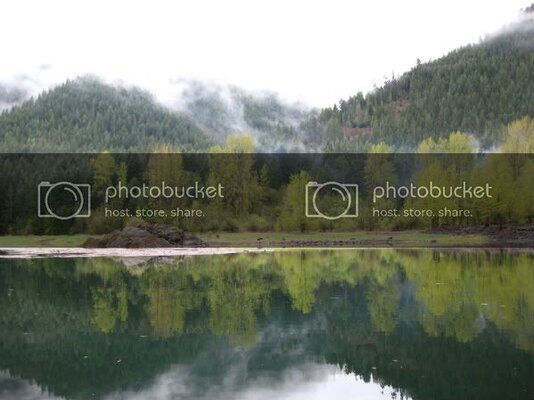 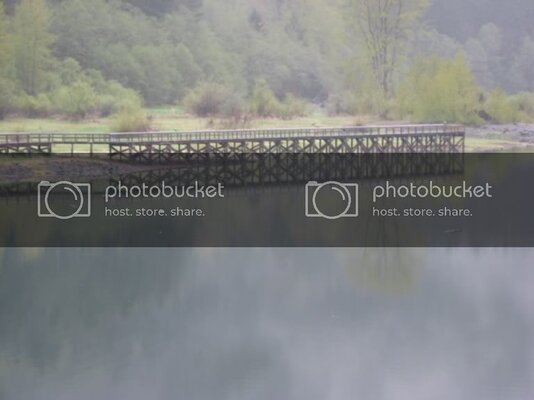 "Dock & the Rock" - Ha!! Anyway.. . I had PM'd one of the moderators on here and asked some advice. He told me to use a chrome/blue Kastmaster. I did, and on my very first cast, BAM, I landed this guy. 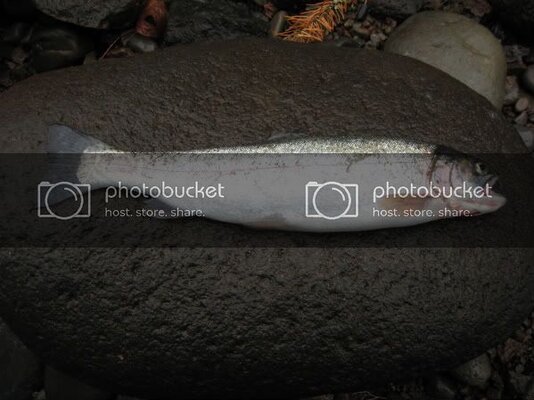 He was about 12". After that I was hooking into, on average, about every third or maybe fourth cast. To me, it just seemed ridiculous. I stopped counting the hooked fish at 20. I'm mostly a C&R guy unless I do damage to them, so I remove the barbs from my lures. Maybe it's just my newbieness, but I've not seen stocker lake trout jump and throw lures before and these guys did it to me over and over again. I was okay with that. It was fun.

Around 9:00 I drove up to Bruno, and I was advised to use pink and nickel spinners, so I threw in a pink Blue Fox.

I've always wanted to catch a river/stream fish. I don't know why... to me it just seems more "Legit" for lack of a better word. Well.... river fishing is definitely more challenging. That's for sure. My first cast was into white water and I couldn't reel fast enough to keep it ahead of the current. I wanted to aim just to the right of it where the water was calmer. 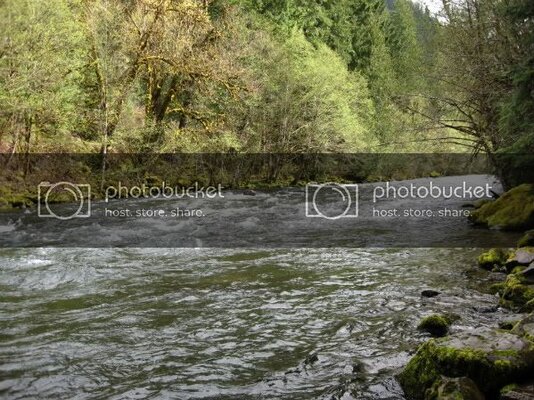 My second cast was spot on and I landed this guy. 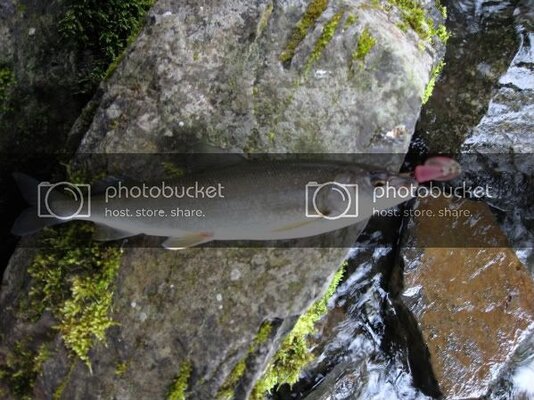 The picture looks a little weird cause I actually shot the picture upside down, and then after I realized what I did I used a photo editor to rotate it around.

This is also the only picture you'll see of that pink Blue Fox spinner because shortly afterwards I did this. 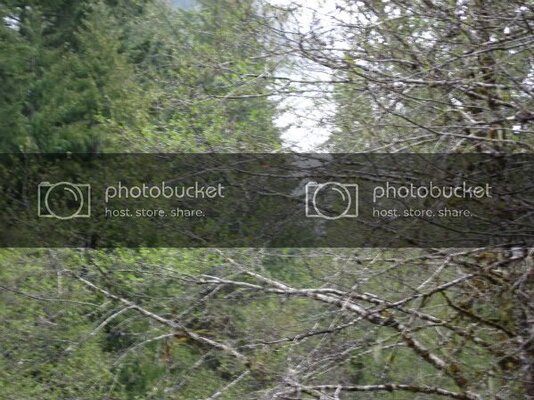 I ended up losing two lures in that spot. A brand new black bangtail (underwater) and that pink blue fox (in the trees). I almost lost 4 others, so after a while I decided to opt out of the lure losing spot and head back to the holy ground where I was nailing em.

I drove past Idahna and thought about throwing in, but there were already a few guys in the choice spots and two of them were snagged while I watched on. See'ing them snagged brought on flashbacks of Bruno and I got back in the car and went back to my first spot.

All three of these lures caught fish. 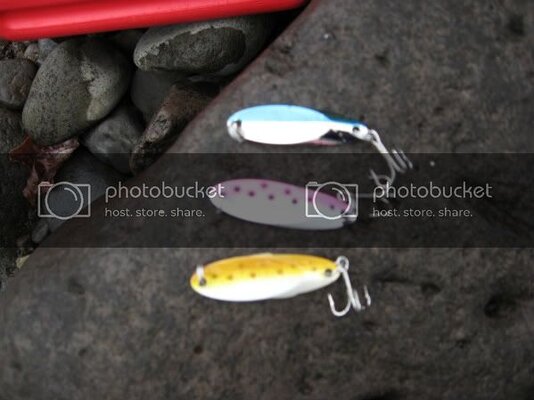 The rainbow one almost got skunked but made a strong showing towards the end of the day.

All in all it was a great time. The weather was weird - sunny, grey, cloudy, raining light, raining heavy, warm and cold. I hooked into a ton of fish, landed and released probably around 10 and ended keeping 4. I took the fish home and showed my kids and sisters kids all about cleaning fish. Their ages ranged from 10 to 4 and they all thought it was "Awesome" and want to go with me next time.

Thanks to everyone for your tips, advice, and encouragement.

Can't wait to go back.

EDIT: These pictures are all out of whack... I'm going to change them and hopefully they'll be corrected by the time you see this.

EDIT 2: I can't figure what the problem with these photos is. Some will resize, some won't.. I don't get it.

"The picture looks a little weird cause I actually shot the picture upside down, and then after I realized what I did I used a photo editor to rotate it around."

I can't quite tell, but think you may have an endangered bull trout featured in that picture?
L

Way to go Michael!!!! I'm glad you had a good one out there since it sounds like you haven't had much of a opertunity lately!!! I'll be heading out there soon, kastmasters in hand.
T

That isn't a bull trout but a whitefish i do believe is the actual name of it. nice pics looks like you had fun
C

thats definitely a whitefish, i catch them in detroit every once in a while. congrats on a good day at detroit, Brian
B

Thanks for the great report. You rocked at the dock and the rock!

He rocked the dock and rock and put a lock on the stock! LOL

Great job, sounds like u had a lot of fun.
M

troutdude said:
He rocked the dock and rock and put a lock on the stock! LOL

I did have a lot of fun. And it was a good thing too.. cause I was suffering from a bad case of fishers block.

capblack said:
thats definitely a whitefish, i catch them in detroit every once in a while. congrats on a good day at detroit, Brian
Click to expand...


If it were an endangered bull, then what could I have done? I was fishing legal waters, with legal gear and he was double pierced through the eye and the head?

I couldn't actually release him that way could I?
You must log in or register to reply here.

Where are you trout fishing this winter?

Winter trout fishing within an hour of Portland?

Nov 25, 2020
case.bolt
C
S
Is steelhead fishing all about knowing where they are?