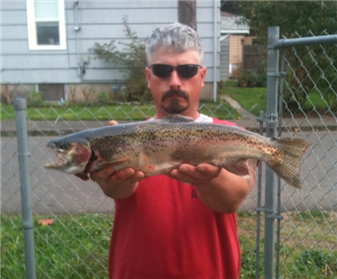 Last edited by a moderator: Nov 30, 2022
O
OnTheDrop
Headed over to the coast a few days ago caught this nice buck within 5 minutes... lost 2 more then headed to a different river to finish up the day. Was just before dark and bobber went down 4 times in 15 minutes. Landed one more then headed home.. can't wait to get back out there. 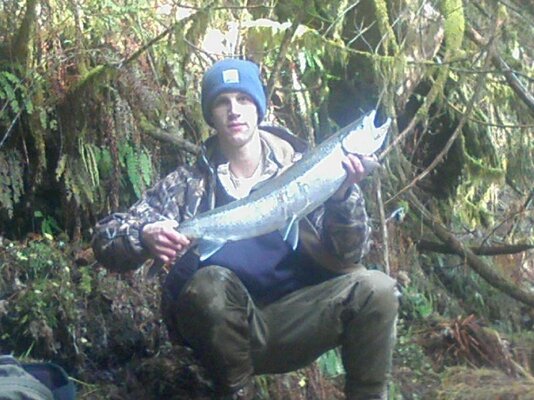 only got a pic of the first one 'cause it got too dark out. Tight lines.
S
skunk
I wish this was a report about what a stud fisherman I have become, but its not. Its a tale of what could go wrong and didn't. After too many hrs and months of trying for a winter steelhead I finally have a success story. Today, after much deliberation I talked myself into getting out on the river for an afternoon of 'practice'. I took my float rod, and for no reason than I thought it was a good idea, my 6'6 bass rod with a browning casting reel. I got to the river and how cool, no one else was in sight. I set up with the float rod and after two casts doubt set in. Just a day like any other, nothing and now I'm discouraged. So I set that rod down and went about rigging a corkie and yarn set up. Something I have never tried exactly. Done similar on Eagle, but this was a bit different. Too much yarn, a too large corkie as I was later told, and probably not enought wt.

A guy and his son come set up about 50' above me, usual pleasantries about how slow the fishing is and they start a fire. The dad moves more upstream and I set about casting. Remember, I rock at casting, catching rocks, sticks, other peoples rigs, old trash, trash fish etc. So when my rig stops on the 5th cast, I become a little ticked. What, now I'm stuck and probably have to break and rerig. Set the hook and what the...it sets back, weird. Yank again, pullllllllll (long pull) back. What in the world in in the river that will pull back??? Never in my life expected a long steel rocket to come launching out of the river. Guy upstream yells 'fish on'...no duh, ooops he has one too. Huge native, breaks his reel, he's loving it. I suddenly remember...no net, not cooler, no knife, no waders uhoh!!! Well, I'll just enjoy...wait a minute my reel won't retrieve. O yeah, did I mention I have no idea how this reel works? Now I'm shaking, the fish peels off line in a downstream run and I can't get the reel to work!!! Needless to say I figured it out, wore the fish out, landed it with my own hand, and have finally...as they say...not given up!!!

Sorry that was long winded, I am so pumped!!! Big thanks to all the info passed along and all the help on the river.
F
fish fear the willy
Fished a small coastal stream this morning with some luck went 2 for 2 with a nice buck showing some color and the headed downstream and hooked a chrome hen that fought like a champ it was a great morning.
T
Throbbit _Shane
Went out today with Charlie from Fishin The Rogue Guide Service. We started a little after 3pm. the first one we got into was a nice bright hatchery. second one was a wild hen. it hit when i picked up the rod to bring it in because we were coming up to a rapid. well not long after we hooked up with it, charlies oar hit a rock and came out. so instead of anchoring and fighting of the fish we fought it on the run. that way we could catch up to the oar. i tightened the drag and we netted the fish. then we caught up to the oar and it got caught in a eddy so all ended well. we didn't know it was a wild until it had been out of the water for a few minutes so i tagged my 4th wild for the year. gonna save the last slot for a big one! 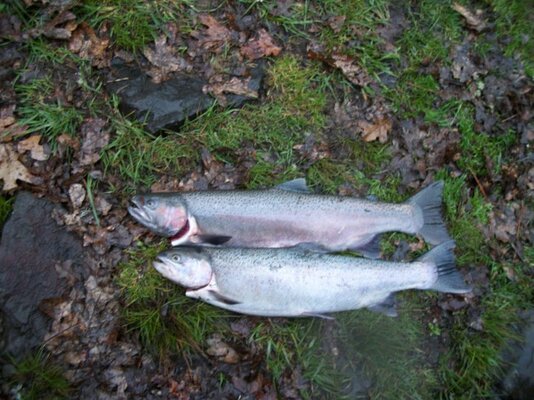 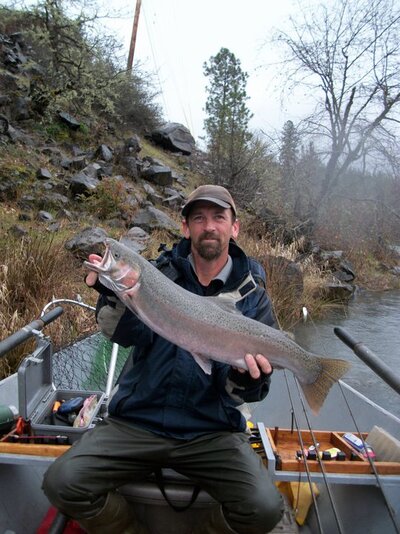 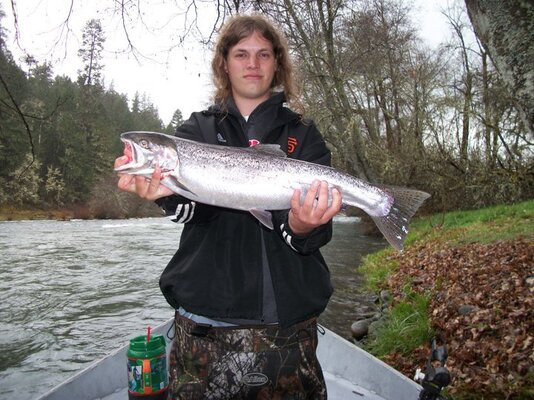 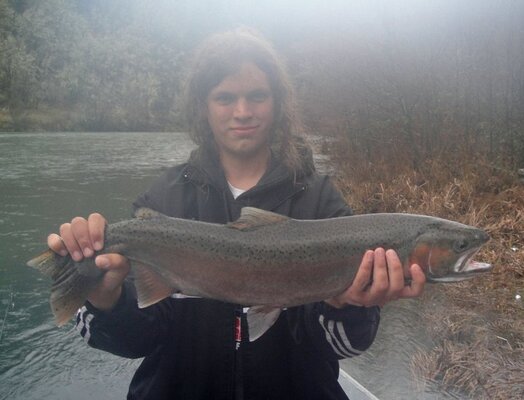 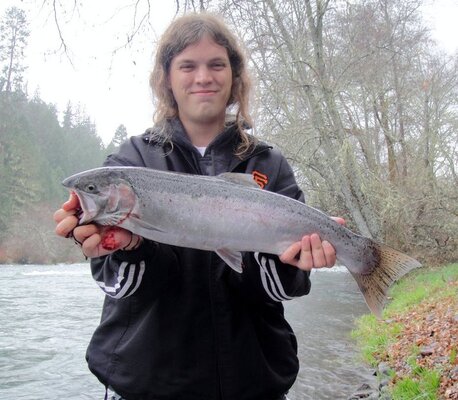 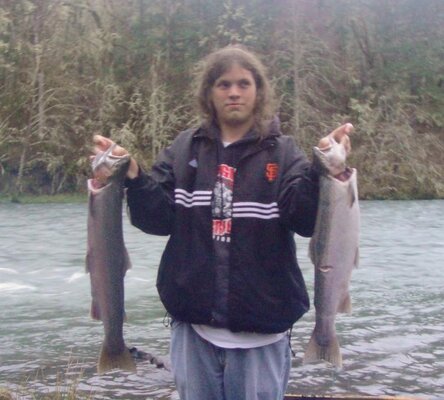 P
Phil_Bud
Went out on the 16th and slayed. Sorry for the double post. I usually don't agree with keeping such a large native fish but it was Shane's big fish and in my opinion since he was going to smoke it, it was ok to keep only because we faught it for a long time in a really akward and swift little spot to land such a huge fish. I would of like to see it swim free but thats how it goes sometimes. Trophy bruder tho.
We released a nice wild female at the very end of the day. I was happy to get a hawg hatchy buck. Awesome shape.
Awesome day on the Rogue once again. Look out for some awesome video.
Last edited: Apr 18, 2011
D
daehleets
Been swacking um last couple weeks using straight chrome candy for bait with a little split shot under the ol bobber. Also been hanging some jig tippers off the spinners siwash hooks to get the short strikers to inhale um. Took the kid out on dads day and got to watch him tie into his second summer runner of the season, gotta luv it.
S
SALTYFISH
There 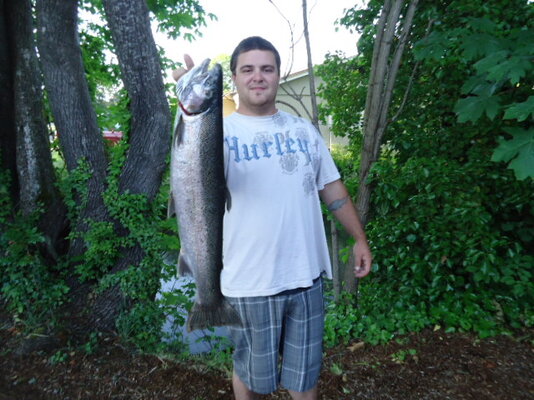 Here...
G
gjonesjr
had a great morning went out for 2 hours or so got me some steel on a blue fox,i think i'll let my daughter take the pics from now on the fish look bigger=]
B
benkearney
And it was on a flyrod 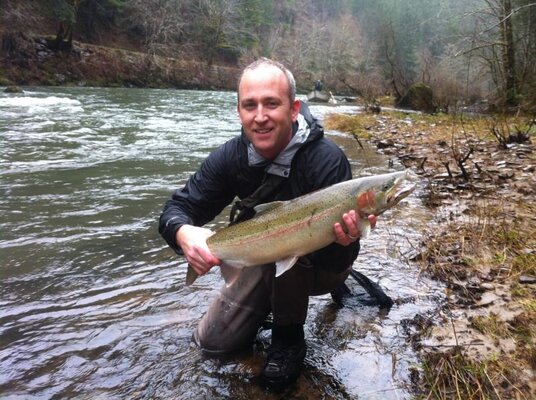 This beautiful nate was released unharmed (other than a sore lip) to pass on the genes
Last edited: Feb 11, 2012

madasahab
This year I fished the siletz, wilson and nestucca for the first time each and each gave up a fish!! this was today on the nestucca...chrome bright 7 pound hen full of eggs!!! 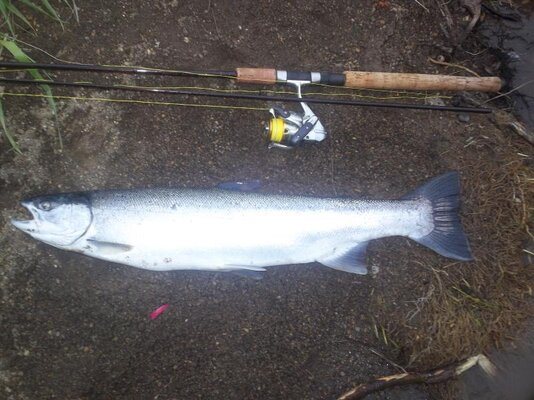 D
dtikey
A couple more falls for yarn. The first one is the dark picture which I handed off to another guy whos also holding the same fish and then I hooked and landed the chromer also. Both at hatchery hole on white yarn. Not a big secret just getting lucky I guess.
D
dtikey
Went up Mac for couple hours managed to land these two steelies and lost another up thier. Crowd wasn't too bad and the weather was nice so all in all nice day. 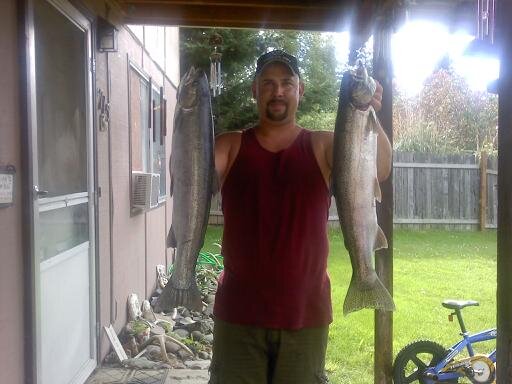 J
Jsjmac1
I finally did it! I caught my first big fish.

The guys on the shore with me were a big help. It's nice to fish with nice people. One fella ran over and netted my catch for me. They gave me great pointers and advice. Also, thanks for the valuable information that is put out on this forum. It is a great help for newbies like myself!

I am officially addicted to catching these beauties!
C
ChezJfrey
Sure, I'll play.

2012 was a good year, considering I had zero steelhead banked in 2011. This year, finally banked my first steelhead, and final scorecard was 39 hooked, 23 landed, 16 tagged, so much improved!

I think one of the more notable this year, was my first summer.

Hit the Clackamas in mid-May, fished a hole I'd been seeing some fish, but nothing going. So, I headed upriver to another section.

Found some fish and missed 2 takes...went for the set, saw the chrome flashing, but ended up with nothing at the end of the line with one head shake both times. Uh oh, this doesn't feel good at all.

While rigging a different spoon and planning to give this spot a rest after my misses, a guy walks up, fish in hand. We chat for a bit and he said another guy, with son were up ahead and that in addition to the fish he had, he also banked a bright chrome hatchery, had the tail when the fish jetted back out, wrapped around a rock and snapped off. Ouch. He also mentioned that the father/son had a hatchery in hand as well.

We parted, and I moved up around the bend, cast out a couple times, reaching a bit further out in the hole each time. As my spoon drifts through and starts its swing, I see a bright mass of silver moving down river...the spoon is swinging in closer and the fish is chasing it! C'mon baby....keep going. The spoon reaches the terminal of its arc and right at that second, fish chomps down. Pull! Money shot...fish on.

I wrestle it for a bit, get it near shore and grab the tail. While I haven't had much trouble in the past...I'm certainly having it of late...fish darts off. Did I get that other guy's same fish? Same as his story, well, except for the fact that I eventually beached it 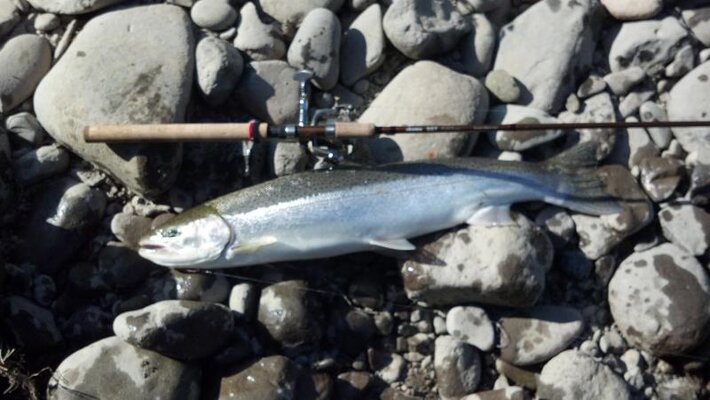 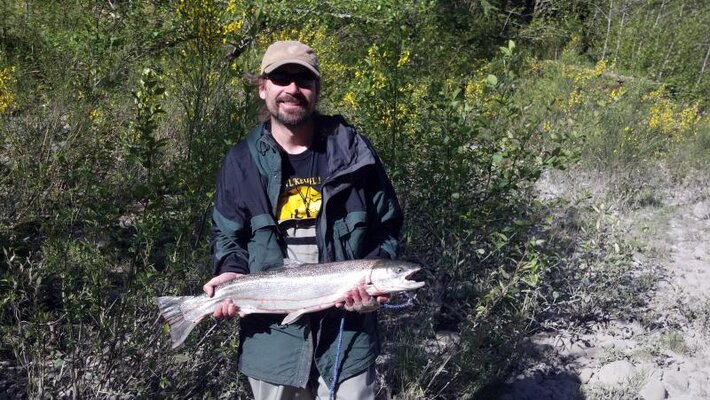 The second photo is courtesy of skunk. Shortly after landing this fish, I run into him and his son; they were the ones the other guy spoke of. We didn't know each other, but through some conversation, found we were both members here. The steelhead they had was his son's first steelie!

Had other obligations today, so fished for a short while after, then packed up around 10:30 a.m. Great day on the Clackamas!
Last edited by a moderator: Jan 7, 2013
S
steelhead_slayer
I caught this summer Steelhead on the Deschutes swinging flies. He provided the best fight to date 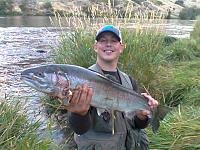 jamisonace
My most memorable fish of the year that I photographed was easily my wife's first steelhead. We had an hour this afternoon to fish before we had to be home to get our boys from school and hooked this beauty in the last slot of our drift.

G
gloomis85
This fish was memorable for many reasons. It was my last steel of 2012 caught on dec 30th. First hen for me of this season, first time side drifting(what a FUN lazy way to fish), first time on a bad boy Pavati drift boat, caught it on my favorite river the south fork of the Coquille. An to top it off I landed her on 6lb test line, which was also a first for me, boy was it a hot fish! What a fun way to end my spectacular year of fishing! Cheers to 2013!!! 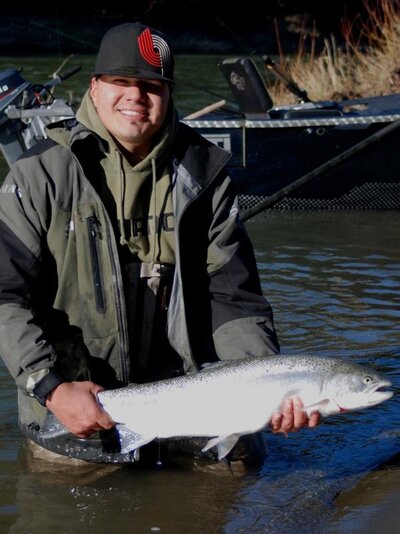 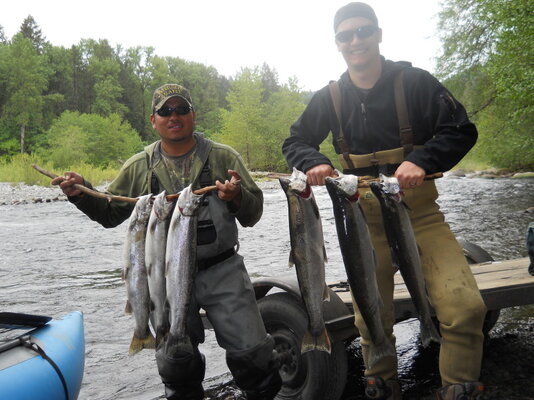 One of my best days steelhead fishing was with ED fast and my friend Lane!
You must log in or register to reply here.