A
ArcticAmoeba
Fished this A.M. Got into a couple fish. One with a fin, the others were brats. I went 2 for 4 today on Owners in a size 4. Steelhead are wiley, so I can't complain too much, but I do not like gear failure. The two lost were stuck hard, and fought for more than a few minutes. Reeled up broken hooks. If they shake loose, or roll off, you can't complain, but this... I can. This has never, ever happened to me before with Owners. And I have put some big fish on their #4's and #2's as well. I got a bad bag, and I called. I am recieving a free package of #4 Needle Points in black, for the cost to ship them. Not a bad deal I guess. Except gear failure, like a few I know, it really gets under the 'ol skin. Customer service guy was actually very smart, quick to assertain the cause, and rectify the problem. Anyhoo, whacked this one right off the bat, and got one more for a limit, just as bright, a bit later in the same drift, after I retied with Visions finally after the fin, and two bust offs. Got a phone again...Finally, so I can once again take crappy pictures of pretty nice fish! 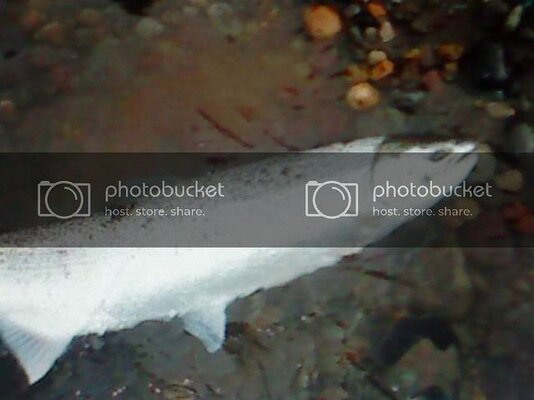 B
bigdog
Nice one bro to bad I can't seem to get in to any fish yet this year oh well they are bound to come someday here.
A
ArcticAmoeba
Thanks CJ. It is unlike any other year I have fished. I am working unusually hard to hit my bread and butter, and it seems everything got swiped bassackwards somehow. I am using very strange methods for unusual presentations but I am learning and adapthing all I can this year. Not too many people it seems are getting into any fish with regularity, I do find the rivers to be very slow, but consistent. Although there have been one or two of those days where you do get completely blanked on every rod out. My pre '09 average per day was excellent, but now it is down lower, to almost 1/3 of what it was. If not a Steelhead, the Springers will be heavy in the big river in no time. You are almost guaranteed to hook-up in some places when the fish are there.
F
fishkiller
Nice fish!! Sounds like owners knows how to take care of it's customers.
F
FishFinger
That's crazy about the Owners, usually a very dependable hook and on the heavy side too. What did they say? Bad metallurgy? Poor quality control in the factory?

Way to "stick it" to them, on the credit and special bonus gift.. lol

Nice fish as usual, if you weren't catching them, I'd be very concerned about the return this winter....
A
ArcticAmoeba
FishKiller - Owner really did a fine job on the customer service end of the deal. Can't complain at all.

I did not really want to pay shipping, but it was like a buck thirty, so I sprung! But the guy said he obviously couldn't tell me exactly what went wrong, but he assumes it was a metalurgucall mis-calculation of material. They are an alloyed piece of steel, and perhaps one element was off.
B
bigdog
Yeah kinda odd for owners to have such a problem but least they made good on it. I know I'll get in to some fish sometime here just the going is slow at this moment. I would have thought would have got in to some by now but it'll come just have to keep hitting the water and going at it. You know I'm a die hard when it comes to the fishing.

ArcticAmoeba;
Glad to hear you had what most others would call a "great" day. I know it has been sub-par year from all the reports. I am thinking patience is the key this year. A lot of us get out there and think the fish are just waiting for us to show up for them. I have only been out three or four times so far,but I mainly go for the relaxation and fun. I think the worst gear failure for me was when my brain neglected to inform me that the rock in front of me was slimey...SPLOOSH! :doh: :redface: Gotta get those Korkers! Be safe.
Barb
F
FishFinger
I have like 60 #4 Owners in reserve, guess I'll have to inspect them before I twist em up.
A
ArcticAmoeba
Barb - It really was a great day, but gear failure is just part of the game we play. It happens, and you can't do anything about it! It was a gorgeous day to be outside today, I saw a flock of Geese that was in the thousands, and a bunch of little yearling deer. Truly a day to remember for sure.

Dan - There is nothing you can do to see the problem before it happens. This is one reason I keep all the hooks I buy in the package they came in, until they get dumped into my boxes. Unless I go bulk. Different story completely.

I can narrow down the issue much faster if I only keep 50 or so hooks(one pack of Owners) in my drift rigging box.
S
Surejam
AA,


Hopefully this weekend I will get lucky and do the same.

ArcticAmoeba said:
Fished this A.M. Got into a couple fish.
Click to expand...

Argh...
A
ArcticAmoeba
Thanks Paul. You are already there, just have to get one outta the water and bonked. Good luck this weekend.

FishSchooler - I'm glad I don't report every single fish I keep, let alone hook-up! :lol: You seem to get frusterated a bit too easily. You are in school. Fish when you have free time.
P
plunkme
can you guys tell me what owners are? im still new at most of these lure lingos so if you guys could post a pic or something so i could understand what you guys are talking about

PS still very newb :lol:
A
ArcticAmoeba
Hey Alan. Owners are just a brand of hook I like to use. I only run the Super Needle Points, because I have gone 2 for 12 one too many times with the Cutting Points and local Chinook. They are super, sticky sharp, and have served me well over the years.
F
FishSchooler

ArcticAmoeba said:
FishSchooler - I'm glad I don't report every single fish I keep, let alone hook-up! :lol: You seem to get frusterated a bit too easily. You are in school. Fish when you have free time.
Click to expand...

Free time comes almost every sunday. It's not my decision.
S
SRO_Slayer
Hmmm?

I have had Owner's break on me more than a couple times! I like Gamagatsu's myself but am curious to see what others think? Let me know what is good besides them?
F
Fishtopher
What this other thinks:

What this other thinks:


Owner, Vision, and Gamakatsu and Eagle Claw are the only brand's that I am familiar with.
And it all depends on what is around the tackle shop when I need hooks.
I look for Owner first, Gami's second, Vision third.
If I have to fish Eagle Claw hooks, special attention must be paid to the business end of the hook.​
F
fishkiller

SRO_Slayer said:
I have had Owner's break on me more than a couple times! I like Gamagatsu's myself but am curious to see what others think? Let me know what is good besides them?
Click to expand...

Well, that's troublesome!! I'm normally a Gamagatsu man but, my local bait shop was out of the sz 4 trebles. So I had to go with Owner trebles for all of my Hot Shots. Do you think I should find some Gamagatsu's on-line and switch them out again? I'd hate to lose a fish do to faulty gear.
G
GreenDrifter
I grew up being taught Gama's were the only hook, about 5 years ago I gave the Owner cutting point hooks a try and havent turned back since.
You must log in or register to reply here.