Family caught a ton of these guys last night. The weeks of research paid OFF the first night. Hope it only improves from here in out. We released about 20 of these two types of fish last night. The guy holding the fish is my nephew. Main goal was to get him a fish, any fish. Mission accomplished!

I’ll add to this through the week or upon return. 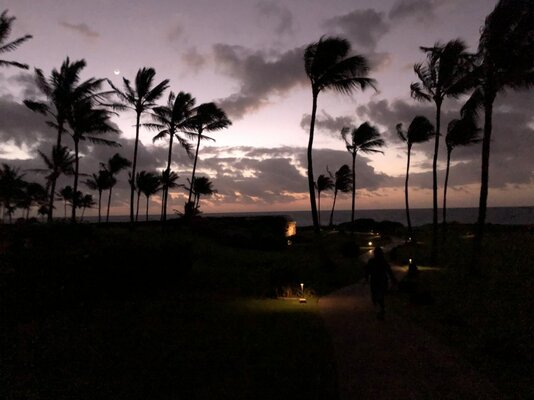 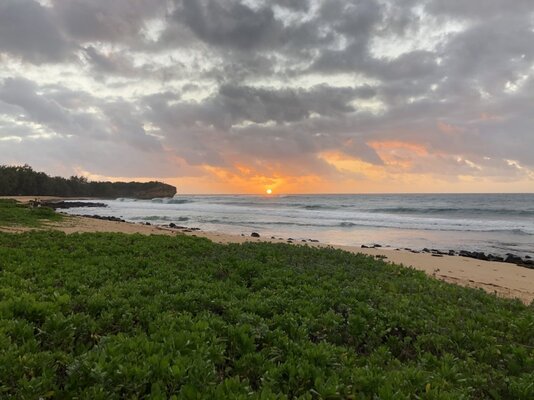 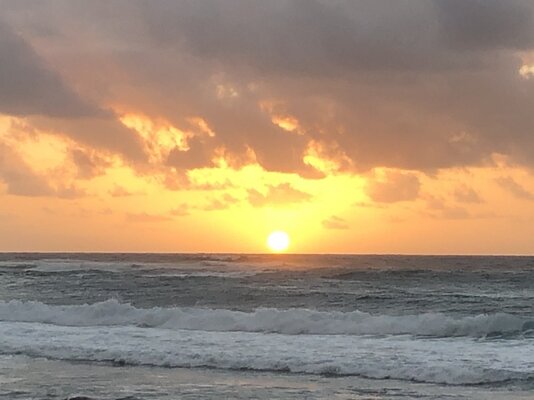 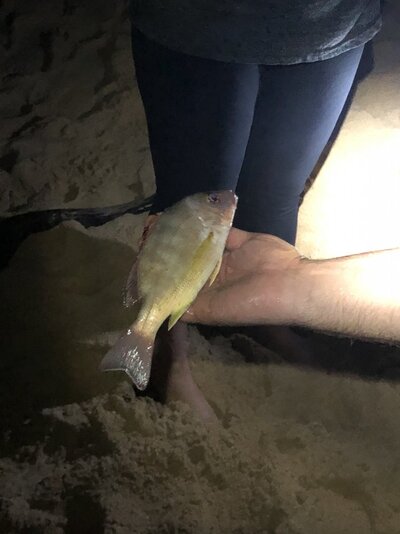 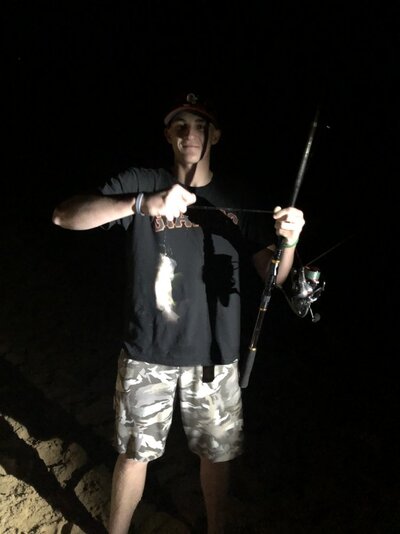 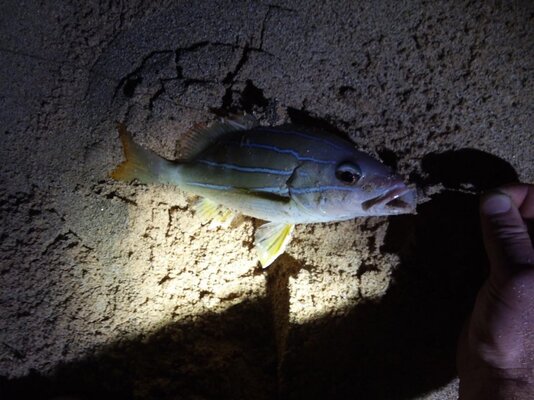 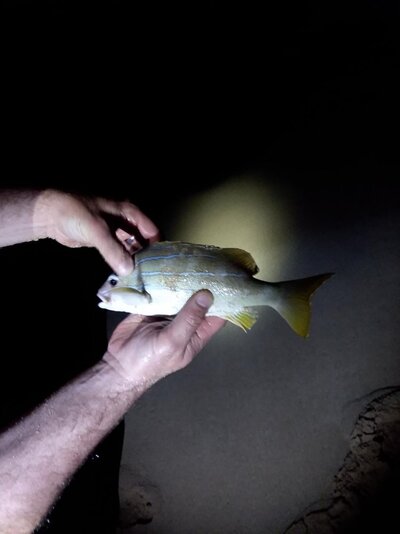 Hooked Up
Looks like a lot of fun Devan. Happy Thanksgiving.

my2labs
And to you and yours my friend.

caught some trevali on the kayak today.

Guide was excellent. I’d love to help him gather more business and am planning on posting his guide info here along with a write up about the adventure. Because it was an adventure, along with a successful fishing trip. I’m pretty sure that’s within rules but want to make sure what is okay and what is not. Can anyone clarify for me if any of that is not okay? Thanks!

Posting a write up when I get home.

my2labs
Here’s one for today.

What a way to start Thanksgiving! 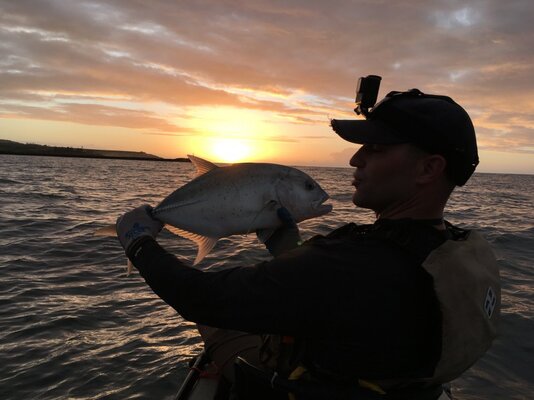 O
OnTheDrop
Nice, Devan! I vouch that you can post his info and what not here, I doubt that’s an issue in the slightest. I’m heading to warmer waters in 2 weeks, stoked....

I hope your turkey is delicious. Looking forward to our next trip as well!

enjoy your vacation. Bring a rod or two

Irishrover
Would love that info, and to hear all about the adventure. Kauai is on our list for our 50th wedding anniversary. That will happen next year. Fishing would be a real bonus. Our first dates were spent fishing together and we have been fishing together every since, so fishing Kauai would be awesome, and warm.

my2labs
So we beach fished another night and caught the same species I posted above (blue striped snappers and crimson snappers.) We pan fried a couple to try and the blue striped were pretty tasty, but the crimson.... YUCK! Tasted like they ate, drank and slept straight mud.

Also halved a blue stripe and tossed them out on rods looking for something toothy... My rod slammed over and I reeled in a leader that'd been bitten in half. To check his rigging, my brother did the same and found the same result. I'm told that they were likely taken by small reef sharks..

I went to the store the next day, snagged wire leaders, circle hooks and heavier pyramid weights, but the trip took its toll on our energy and we never beached fished again before we left. NEXT TIME we will be ready though!

my2labs
As for the guided ocean kayak fishing trip I took looking for trevali.......

It was absolutely fantastic!

And because it was hard to locate online, and I was so impressed by the experience, I am going to post a bit of an online plug for the guy who runs it here. Hopefully, at least one of you will give him a call and confirm or counter my description below on your next trip.

Hats off to the guide, Nathan Kirsch. Dude works his butt off, has quality equipment, knows his target waters, the fishery and is as nice and professional as they come. I was highly impressed by him and man o man was it a GREAT time! As such, I am writing this post so that other OFFers do not miss the opportunity to support his very small (its only him), personalized business when you take the inexpensive and quick trip to Kauai.

Nathan is also a full time deck hand on a larger operation in Kauai. I am not familiar with that business but wanted to note that he fishes 7 days a week (when there is business available), either as a deck hand, or running his own business. Just wanted to point that out to detail his exposure and knowledge. The kayak gig is small, but his skill set did not seem to be. And if you look at the gallery on his website, I think it speaks for itself.

He also allows you to keep all of your catch if you'd like to. Most (as far as I can tell all) boats in Kauai do not allow clients to keep anything over 25 lbs as the rest can be sold to fish markets. However, Nathan does not limit you in that way, which is unique to that area. (I did not keep one fish..... all were released, though, I could've.)

Dude even took me out on Thanksgiving morning even though we had planned for Tuesday originally. Weather was best Thursday so he gave up part of his holiday to make sure I had the best experience I could.

I only booked a two hr morning session with him, on a tandem Hobie peddle kayak with him in the back and me in the front. He called me two days ahead to ask me exactly what I wanted to do... what species I wanted to target, methods I wanted to use, catch and release vs retention fishing, and to discuss my overall angling skill set. The trip was absolutely tailored to my very specific requests. I could've taken my own kayak and he would have mirrored me.... but, for my first time ocean kayaking, I wanted his experience and guidance to drive the trip. A decision that I am very happy with.

We launched from a small harbor (Im not going to name it because thats his deal, not mine) just before dawn and trolled a big rapala and casted large poppers for GTs. In short time I was able to hook and land four GTs, ranging from about 5 - 15ish lbs or so, without even leaving the bay. They fought well and were absolutely gorgeous fish.

We started heading offshore to target GTs and tuna but were halted by a large pod of spinner dolphins that schooled all around us, rising out of the water literally within arms reach of the kayak. I asked to stick with them for a bit to take a video for my wife and he accommodated.

The wind eventually picked up enough and the time had flown by so we didn't make it offshore this time, though if I had booked a longer trip I am very confident that Id have landed a tuna or more GTs, likely much larger than I did in the bay.

He also OFFers sightseeing kayak tours, whale and dolphin watching etc.. Including the fishing.... any of these would be incredible for your 50th. Congratulations by the way sir. You obviously found the right one and have worked hard along the way! Hats off to you and your wife.

I have attached some photos from the trip and eventually will add a few clips from my go pro (If I can ever figure out to edit it).

Last but certainly not least... The trip was priced right! His rates are much lower than other operations I found though in my opinion, he could charge much more. Anyway.. if you head to Kauai, I highly recommend bucketlistadventureskauai!
Last edited: Dec 1, 2019
B
Bucketlistadventureskauai
Epic trip can't wait to fish with you again tight lines my friend aloha

Just to head this OFF... be sure to read the forum rules because as a new member you need to meet certain criteria before doing/posting certain things. I will vouch that this site is very friendly to anglers and guides.... but it is also strict on its guidelines, especially for new members.

You earned the shout out man. I would not have written this if you didn't.

C_Run
Nice to know. There weren't any kayak fishing guides in Kauai when I went a few years back.
You must log in or register to reply here.