C
Chief Jim
The kid next door crewed on a tuna charter today out of Depoe Bay. They went out about 38 miles, boated 10 and lost another 5 or so. Average weight was about 25 lbs., with one going around 35. I heard a report over the weekend that one boat caught over 30! That's a lot of tuna!
Chief Jim

Irishrover
Chief...........they are bringing in tuna by the boat load! I just spent the last three days down at Newport fishing for silvers. The cleaning table were full of guys cleaning tuna. Lots of fishing happening now at Newport.
Last edited: Jul 14, 2009
O
osmosis
Has anyone seen what the commercials are selling albacore for down there? Is it down to 90 cents/LB in the whole yet?
S
SNDSLGR
Os, not Newport but I was at Garibaldi yesturday and it was 1.75 for whole fish at the dockside fish houses.

Irishrover
There was one commercial boat sellling tuna at the South Beach Marina. I didn't check it out but was told it was about $3.00 a pound. I assumed that was proccesed not whole. There are more tuna to come so it could come down. They are about 37 mile out now.
O
osmosis
Thanks guys, looks like I'll wait a little longer till I go load up.
I like to get a bunch and can it up every year.
Last year the best prices were up in astoria (well actually warrenton) but I figured they'd be similar up and down the coast.
C
Chass
Anyone have any suggestions on what outfit to charter with for Tuna out of Newport?

Chass said:
Anyone have any suggestions on what outfit to charter with for Tuna out of Newport?

I am heading out tomorrow aboard the F.V. Siamez through Depoe Bay Tradewinds for albacore. I went out on the same boat for Halibut - the crew is pretty salty, small boat, and they at least acted like they knew what they were doing.

I'll post a report by friday.
O
osmosis
Depoe bay tradewinds does a good job. Those are some fishy guys.
O
Oregonchris
I bought a 12 pounder while we were down in Charleston....that stuff is just plain amazing on the BBQ
M
madoc
So the seas were kinda bumpy on the way out, and there wasn't much to see - ocean, clouds, the sky. I didn't have the camera out during any of the action, or for most of the trip - between trying to hang on, fishing, having my hands coated in saltwater and tuna gore, I really didn't think handling either my phone or my camera was all that great of an idea.

But the trip rocked. If you have a chance to get to Oregon during albacore season (Mid July - September), Chartering with the FV Siamez through Depoe Bay Tradewinds is worth it. Skipper Rick really knows what he is doing, as well as his deckhands.

One of the couples on the boat were supposed to have gone out with another charter company for tuna that day. They had planned a month ahead, and had come out from Meridian, Idaho for the experience. They got out here a couple days ahead, and the night before they were supposed to head out the charter company canc'd their trip, with the excuse that the tuna weren't running. So they called Depoe Bay Tradewinds, and got on Rick's boat. Sure, the tuna weren't running. Don't use Dockside Charter company out of Depoe Bay.

We had to go about 40 miles offshore to get to where the water was the correct temperature, and that took about four hours. Once we were out there, as soon as the lines were in, we were basically on fish. Most of the action was one at a time, but there were several points where we had doubles and triple hookups. Then things got exciting, as we had eight lines in the water at any given moment.

Rick's policy on tuna is all about getting every customer on the boat equal rod time. He does this through his keep policy - everyone gets an equal share of the fish landed, regardless of who landed them. If someone decides to be a rod hog, then they get to work for everyone else's benefit. So we all took turns when we had hook ups. Not that is mattered - everyone on the charter was polite and enjoyed themselves, and took instruction from the deckhand quickly - when you have 8 lines in the water and three of them have tuna on, you need to move other lines around. everyone figure it out pretty quickly, and we only lost one fish because of tangled lines. There were four or five hookups where the fish threw the hooks - one happened to me right at the boat.

We all ended up covered in fish blood - head to toe. At certain points we had four or five quickly expiring tuna dancing around the deck, spraying everything within six feet with blood, seawater, and at certain points they would puke up their stomach contents. I'll probably have to wash the clothing I was wearing yesterday two or three times.

There were six customers fishing, and we brought in 35 fish. we would have brought in 36, but miscounted (Again, Rick's policy is to try for a minimum of 6 fish per person). I think the miscount was due to the shark that we reeled in - small 3 foot Blue that got tossed back.

In addition to the tuna, we got to see a few whales (Gray or Humpack - Rick said they were Humpbacks), a small pod of Orcas, a dolphin or so, and loads of different seabirds.

We finished fishing around 2pm, and started heading back in. We got back around 650pm, exhausted. I got home around 11pm that night.

So now I have about 40+ lbs of tuna to process - Schooling Albacore are juveniles, and the biggest we brought on the boat was probably a hair under 40lbs, most were in the 15-20lb range. Depoe Bay Tradewinds has a couple of guys working their filet station that know how to get the most out of the tuna, as far as the more desirable white meat. A 15 lb fish dressed out to about 5 lbs of loin and belly meat. The rest is guts, head and spine. Like any good asian kid, I convinced the guys to let me have a few of the heads as well. I probably could have taken all of them, but I don't have a chest freezer yet. Next time I go out, I'll make sure I have access to one.

10 lbs of meat is at the smokeshop right now - gonna can most of that, another 20 is going in cans without smoke, and the remainder is gonna get frozen or grilled.

So here are the pics.

Step one, put your fish in a box.

That's my fish in a Box! 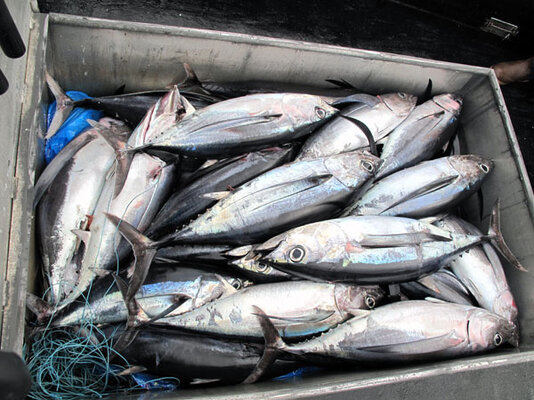 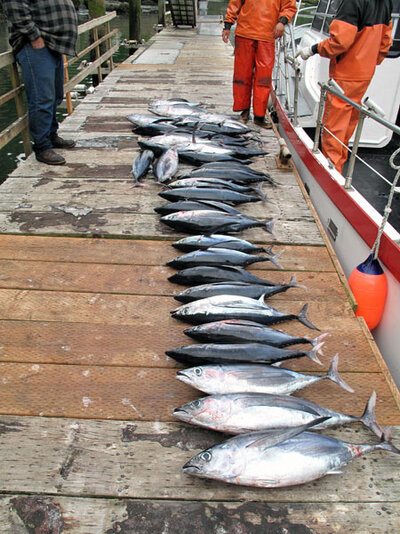 Awesome report back on a wonderful sounding day on the water with the right crew and captain. I don't remember a more detailed post on a fishing adventure. You have certainly gotten my attention and got me to thinking even I could brave that much water around me. I tend to get the nervous shivers in our hot tub...
Beautiful catch too! You're going to be enjoying your efforts for a long time. Bravo! :clap: :clap:

I went last year with Dockside Charters out of Depoe Bay, it was excellent. Great Captain (Captain Loran) and crewman. We had 40 in the boat by noon. I ended up with 9 tuna. I had tuna all year. I will charter them again.
C
chris61182

osmosis said:
Has anyone seen what the commercials are selling albacore for down there? Is it down to 90 cents/LB in the whole yet?
Click to expand...

Does anyone have recent info on tuna prices? I can't afford to go out on a charter but I sure can afford to drive over to the coast and buy some .
M
Markcanby
I went out for bottom fish with trade winds a few years ago. I will never go out with anyone else they were great.:clap: Whats a tuna trip going for this year?
You must log in or register to reply here.