Gettin' 'Nooks on the Clack

D
dude young
Look, I am wiped out right now, so this will be short and sweet...

Get your minds out of the gutter.:naughty:

Went to the upper Clack late this morning, Wanted be there early, but a certain chicken had decided it was better to go on a tour of the neighborhood than to stay in the yard, so I spent some time chasing her down before I got to leave. Finally got on the road and got to the river around 10-ish. Osmosis met me little after 11 and we proceeded to perforate the water with whatever we could find in our kits and in the river (more to come on that in a minute). We decide that we were going to move up stream for a bit to fish some deeper water when Osmo hooked someone else's gear in the water. He reeled in a brass blade/silver ball body spinner in pretty good shape. He OFFered it up to me and I accepted. We moved up stream and started drifting corkies for a while to no avail. I broke off one too many times and at about 5 I say "I think I am going to have to call it a day." He ties on a spinner and no sooner than I say "day" and he replies "Fish On!" So he tussles with this nice 'nook for bit before dragging it up the bank and WABOO! Dead feesh. 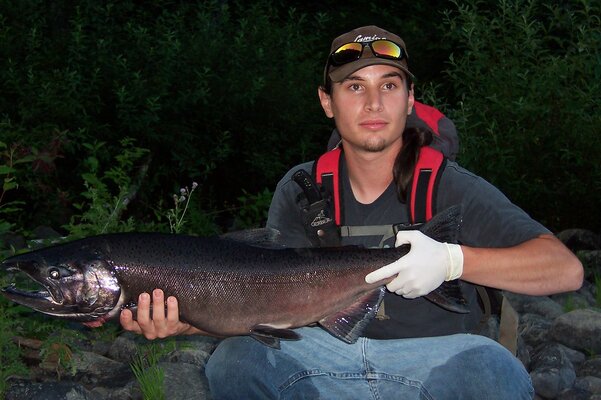 Now, I have been carrying the skunk since I moved to Oregon in November; not even a bass yet. I can't go home now, can I? I don't have an arsenal of tackle built up yet, so I tie on the found spinner. First cast. WHAM! Fish On! I am in full speed hyper-wobble. Thank the Gods Alan was there to keep me cool. "Pump and crank," "Get your rod pointed up stream," "Don't horse it!" How long did it last? 10, 15 minutes. Heck may have been 2 for all I know. But I do know that it had 5 or 6 good solid runs in it and I had to boogy 50 yards down stream with it. (A special thanks to all those doods that reeled in and gave way to the new clown in town - you know who you are) Finally got it to the bank, and "Doh!", it's got a fin. But, it was a BIG fish. Nice bright native 'nook. 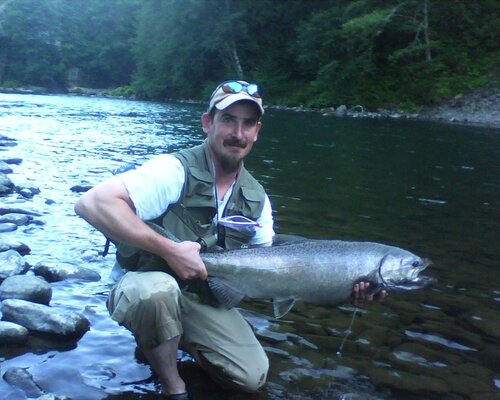 We fished until about 8, each of us suffering form short strike syndrome for most of the rest of the night. I did have another nice clipped 'nook on shortly after my first that wrapped around a rock and cut my line. With my found spinner in it's lip.

Oh, well. Back to where it came from. But, I am going back, and this time, I am armed with my new TCO's. Bring it!

I need a nap. Good night all. Good night skunk.
K
Kodiak
Nice fish and nice pics. Keep them comming...especially tomarrow!..LOL
T
Troutier Bassier
Haha,
I was fishing at Chinook Landing for Bass, and I found a Kastmaster in the Water. So I tied it on and 3d Cast WHAMO! Fish on.

You will probally have better.... luck with Tcos
O
osmosis
Was a good day on the water with you Steve. Hope to run into you out there again soon.. I love watching those skunks die!!

the chinook today came on 1/8oz bullet bodies and .025 #4 plain brass blades (my usual spinner) and the reclaimed plain brass inline #6 W/ a nickel snoman body Pulled through for dude young like a champ!
I did get an exceptionally large (for the clackamas) rainbow on the green TCO, but no nooks today on 'em . They were lookin for something more plain haha
M
Mike123
How'd that fish smoke up Osmo?

Good job BTW!
T
Troutier Bassier
I want to try Nook Fishing, My friend says there the Best Fighting fish hes Caught. (Well, the Chrome ones)
O
osmosis
good 'ol buck cut like the very best of your santiam fish, nice and orange. it sure suprised me.
That photo is after it sat dead for a few hours and it got way darker than when I hit it with a rock.

osmosis said:
good 'ol buck cut like the very best of your santiam fish, nice and orange. it sure suprised me.
That photo is after it sat dead for a few hours and it got way darker than when I hit it with a rock.

Nice try Mike . Not finding any fish down there 'eh :lol:?
Click to expand...

Damn nice fillets! Hahaha don't take me the wrong way man.. just yanking your chain. Springers can be darker than the ace of spades and cut better than a dime bright steelie! That fish isn't too bad for a springer though. Dark coho and springers I always keep. It's the dark fallies I throw back.

And NO I'm not finding any springers in this neck of the woods.. I floated today and hooked a steelie and seen a whole lot of suckers!

Where's the pic of the second fish you kept?
Last edited: Aug 18, 2009
O
osmosis
I was just teasing as well man no problem.
it did suprise me that it held its color and texture so well. I was glad when I gutted it and saw bright orange.
The top pic is that fish from today and the bottom filets are columbia steel for comparison.

I saw several hundred springers under the mill city bridge on saturday, of course above the deadline!
M
Mike123

osmosis said:
I was just teasing as well man no problem.
it did suprise me that it held its color and texture so well. I was glad when I gutted it and saw bright orange.
The top pic is that fish from today and the bottom filets are columbia steel for comparison.

I saw several hundred springers under the mill city bridge on saturday, of course above the deadline!
Click to expand...

The two fillets are identical in color.. wow!
I know of one hole there may be a few springers but they just aren't worth a darn this time of year up here.(In most cases.) The North Santiam is just a bit shorter of a run and the Clack is by far.. Springer fishing lasts that much longer...

Were you guys high med or low in the Clack?
C
catphish
wow

I swear to the gods of nature, if I didn't know better, I would say Osmo is their affiliate here on the good ship earth. I have not fish with him yet, but have had the pleasure of meeting and chatting a bit. Stand up guy, but I just get that feeling that he has extra blessings. Get in touch with nature, and nature touches you! Get in touch with Os, and natuer slaps you across the chops with 10lb of shining bright chromed beauty. Great job helping another OFFer lose that skunk bro. Im headed to sandy right now, hope to lose a skunk myself. TL
F
FishFinger
Congrats on staying with it and getting the photo op. Proof indeed the stink no longer follows you... Now that your Chinook cherry has been poped, you know you have to get back out there and get another. The great thing is.. it's still early in the season.. The best is yet to come.

Osmo.... That TCO spinner... That is how they look after an epic fight.. Nice and mangled.
Y
youngbuck307
Yes trust me first was the hardest..... after that its all down hill baby
F
fisch
Osmo knowledge

I fished right next to OSMO on Fri - plunking for Steal. Nice to meet you btw. Firth time plunking ever for me and after few advices I got 7 hits and 2 fish ON. I lost both of them but that's just what I do. I've been fishing in NW since Oct 2008 and so far I lost around 4-5 Steal and 4-5 Nooks/Silvers. I'm a very patient person(aka fisherman) so I know my time will come. Skunk MUST DIE!
J
Justluck
Nice Fish guys!
B
Bohemian
"your usual spinner"

Doesn't an 1/8oz body with a #4 blade make a very light spinner? I've been using that body on my #3 blades...is that OK? Just curious - want to make sure I got it right before I copy you

Bohemian said:
Doesn't an 1/8oz body with a #4 blade make a very light spinner? I've been using that body on my #3 blades...is that OK? Just curious - want to make sure I got it right before I copy you

I've started running 1/8 on most of my 4's and slightly under an 1/8 on my 3's.
O
osmosis
You can cover a majority of the spots in the clack with that spinner configuration. Just super deep or fast boily holes force you to upsize.

I find the 1/8th oz bullets and a 4mm brass bead space out and balance near perfect with a #4 blade (using a normal bearing bead as well). There are tons and tons of ways to run a #3 or #4 french blades I just like the simplicity of those and how well they work.
I run them with a .025 blade.