Moderator
Most Featured
Things are looking up for this years Central Coast salmon season especially coho. The hatchery quota is 35,000 fin clipped fish, up 15,000 from last year. The season runs from June 30th until September 3rd. That is the good part. It adds more than a month to the season from last year. Fishing for coho off the Central Coast in August is a treat. Usually the winds are not as bad as they are in July so the ocean is a much friendlier place to fish. The fish have had longer to feed and their size has increased. There is a non select season that starts in September with a quota of 3,550 fish. The non-selective coho season will be open each Friday and Saturday beginning on September 7 and continue through the earlier of September 29 or quota.

Chinook season opened in March and will close October 31. That is a good long season.

This year we have the addition of the long leader rock fishery out past the forty fathom line, with this and the longer salmon season some of the pressure on the near shore rock fish should be reduced.

I'm really looking forward to a fun filled season with plenty of opportunity to land a variety of fish. Halibut, ling cod, rockfish, tuna, and salmon are all available. Hopefully the weather will cooperate.

Bad news is in the wind for the Columbia River B-10 fishery. Expected lower returns of Chinook salmon especially up river stocks seems to have curtailed the season. August 1 to August 24th have been tossed around. There is also the possibility of no fishing at B-10 with the deadline being at Tongue Point. Fishing above TP would be allowed but reduced.

FYI that need to know Tongue point is just east of Astoria next to Youngs Bay. Tony

What about the tidewater fishery I assume it comes out soon, would love some Coho retention in Florence!

GaryP1958;n611432 said:
What about the tidewater fishery I assume it comes out soon, would love some Coho retention in Florence!
Click to expand...

Fall salmon estuary/river regulations are finalized and announced in June. Based on what I have heard, we will most likely be under normal permanent regulations for chinook and coho all along the coast this fall. (which means NO SPECIAL wild coho seasons).
Last edited: Apr 13, 2018
F

Good news, but I wish they would leave bottom fishing open off of the bank. most of the fish are being caught off charters and off boats and would leave the opportunity to people who like to fish off of the jetty.

fish4life;n611524 said:
Good news, but I wish they would leave bottom fishing open off of the bank. most of the fish are being caught off charters and off boats and would leave the opportunity to people who like to fish off of the jetty.
Click to expand...

Don't forget the near-shore and estuary kayak fishermen that also bottom fish all year round. I let ODFW have it last Fall when the total closure was announced, I was just getting ready for some Fall lingcod when BAM, sorry, too many Black Rockfish caught over the summer, stand down until January 1.

On the positive side of things, ODFW made a commitment to keeping bottom fishing open all year, including making in-season adjustments as needed to avoid another 'total closure".

They also committed to post timely in-season catch data, this where you find it:

still too early in the year to say much but it is definitely better having this data available. this is the 'Estimate by species' through end of Feb:

FYI- January 1, 2018: no football for me, I harvested a lingcod, black rockfish, and a limit of crab. 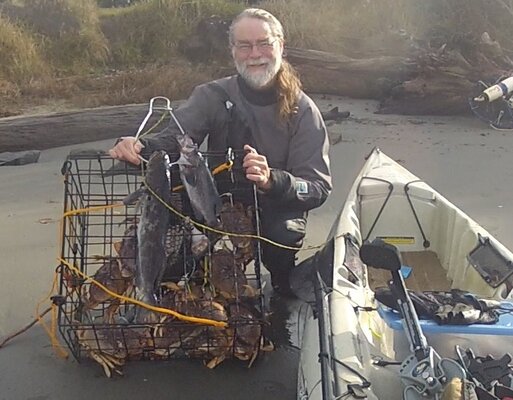 Moderator
Most Featured
With some changes that were made to limits and more attention paid to the fishery, I believe the near rock fish season will not shut down. If the tuna show up and salmon start rolling in, the less than 30 fathom rock fish will get a break. A separate shore based fishery might not be a bad idea. I don't think jetty fishing really hurts the overall numbers of rock fish.

Has anyone tried for Chinook out of Winchester bay yet? I am almost done with the summer projects and itching to go and try.

Moderator
Most Featured
Getting close to the Central Coast Coho opener. It's this Saturday the 30th of June. The weather at this point does not look promising but that can always change. Spent Sunday sitting down on the boat tying up mooching rigs, adding a hoochie with a 3.5 spinner blade above it to the line. That is a set up that I have used for years and it has worked well. The hard part is locating the Coho this early in the season. Once they fish have been located, the fun begins.

Recreational bottomfish closed as of Monday, after excellent summer season

Gillnetting on the Columbia