NKlamerus
Wish I had some fish pictures to post, but one of my new years resolutions, other than fishing more, will be to hit Bond Butte pond more, I live less than 20 minutes away and I know there are some giants in there.

I fished it today for 3 hours and emptied my whole tackle box, not a single bite. Never even saw any bait or movement. Experimented with some colors and baits I usually don't throw.

It was dead still, not terribly dirty but the worst I've seen it.

Usually it's a wind tunnel, being right next to and parallel with I5, among all the grass fields, the wind rips from the north the only calm spots are weed mats. 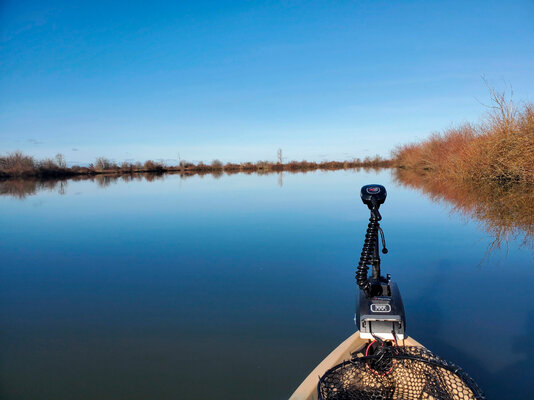 plumbertom
All I've ever caught there are small bluegill.
From what I read it's stocked with channel catfish now and then by ODFW and I've read reports of people catching catfish near 5 lbs.
It certainly looks like it would be good water for bass and with the numbers of small bluegill there is certainly plenty of forage to produce good sized large mouths. But the cold water could stunt their growth.
Then again, my understanding of how they relate is that you need to harvest 5 lbs. of bluegill to every pound of bass to grow bigger fish,
So grab the kids, even if you need to borrow them from the neighbors, the small Zebco's and bobbers, pick up a box of red worms and get out there to thin those blue gills and get the nose pickers started on a life long addiction that's good for them.

NKlamerus
I would 100% recommend it for kids, it's loaded with bluegill and decent sized catfish, they did a net sample on 2015 and got at least one decent sized one. (Photos in link below)

https://www.statesmanjournal.com/pi.../30/net-sampling-at-bond-butte-pond/30919693/
I have seen some very nice bass caught out there via Facebook and fishbrain

As far as I can tell, based on Google Earth images back to 1985, it's never been drained. I can't find any more topo info or history on it, other than the fact it was gravel pit
Last edited: Jan 11, 2022

NKlamerus
Well I gave it another 2 hours, never even saw a fish. Spent just enough time to get soaked in a 20 minute rain shower

Wind was pretty random, blew from the W, N, or E at random times, got COLD out there too! Phone read 38 degrees

95% of the lake right now is 4-6' of water to a thick gelatinous weed bed, water is crystal clear.

I fished the one hole that's deeper with a jig, rattletrap, chatterbait, worm, and senko, to no avail.

Shaun Solomon
Brutal. You totally stocked up on fish god points though, so there’s that.

NKlamerus
I'm not sure they quite paid off yet lol!

NKlamerus
I fished it today as a test run for my new sonar, definitely wouldn't have caught the larger fish without it.

One decent one and 2 dink's. All on soft plastics, the lake is a little dirty and the weeds have really taken off already. Did get to see a crop duster flying around for a bit.

NKlamerus
I was ready for to get disappointed again so I figured I'd head out late Saturday, but it's at least getting to the point I'm not skunked, for now

Water was clear but I kept getting hammered by rain storms, glad there's sharp corners out there to hide from the wind

Weeds are surprisingly not bad, but it could have been the wind pushing them over.
D
DG1959
Try for catfish there.
K
kemfish
Went out on the pond today looking for a catfish. No catfish, but a good bunch of bass. Texas rigged worm seemed to be the trick which was fun since I haven't done much of that style of fishing the past couple years. Weeds were messing up my kayak prop so I ended up having to paddle quite a bit. I've been trolling too much this year and need to get my kayak handling skills back in shape so I can cast more effectively. The little bit of wind kept knocking me off my spots and I spent a lot of time casting behind me or at weird angles.

I've tried to get a catfish out of this pond four times now with no luck. The thick weeds make a standard bottom rig not very practical. If anyone has any catfishing tips for this pond I would sure appreciate it.

plumbertom
Well, in weedy ponds and lakes, a Texas catfish rig can be productive.
Or maybe a Santee-Cooper rig

Now
Now, personally, I have a huge preference for chicken liver as bait for channel catfish.
The best way to use it is to wrap the liver in cheesecloth to make a little bag, and then just hang it on your hook or poke the hook through the middle of the bait.
No need to try and hide the hook inside it, as catfish don't care.
K
kemfish
I've been using shrimp mostly with chicken livers last time, 2-3ft under a float to keep it out of the weeds. The weeds appear to cover the entire bottom of the pond with some areas near the surface and some thinner areas where they are much lower. I think a bottom weight based rig would just tangle instantly. I've been focusing on these thinner areas where the water is a little deeper. I'm still 2-4ft off the bottom which seems high for a fish we traditionally fish on the bottom for. I think catfish may be a little more aggressive/predatory then we sometimes give them credit for and I'm hoping they'll eventually come up to my baits.

NKlamerus
They definitely can be more aggressive than most people think, they are constantly eating big swimbaits people are throwing for bass

Are you from the bank or off a boat?

There's one spot in the most northern section that touches about 9-10' deep and is weedless, it's a fish holding hole for sure

kemfish said:
. I think catfish may be a little more aggressive/predatory then we sometimes give them credit for and I'm hoping they'll eventually come up to my baits.
Click to expand...

This is very true.
Most people don't realize that channel catfish are, in fact, apex predators. They will attack and eat any prey they can get at. I have caught them on jigs while fishing for crappie, on top water lure while fishing for bass, on nightcrawlers, on red worms while fishing for bluegill, and on bait fish both alive and fresh dead.
I've made this point many times while sharing my catfish knowledge.
Catfish do scavenge, and they are very good at it. With poor eyesight, they don't usually attack prey from very large distances, but will follow scent and vibrations in the water to make a kill.
This is another reason I tell people they are being mislead when they believe that catfish bait needs to be rotten for best results. While rotten bait will tend to make a large scent area in water, it won't be the first choice of the channel cat. Good fresh bloody or oily bait will attract the fish much faster and entice it to bite quicker and more assertively.
This is even true with prepared (stink) baits. A fresh opened container of prepared bait will out fish that carton of bait you've been keeping in your tackle box for the last couple of trips.
Some catfish, like flatheads and to a lesser extent blue catfish, are almost impossible to catch on anything other than either live or very fresh dead baits.
One more tip in passing, if using cut bait for channels, mackerel or sardines work well, mackerel because it's a very oily fish and sardines are a very bloody one. Always keep your cut baits on ice or at least as cold as you can until you put it in the water. I hope some of this helps increase your catch.
K
kemfish
I fish from a Kayak. I know the deep spot you speak of. Haven't caught a thing there. Have caught at least a small fish or two from most other parts of the pond except for the the shallow basin near the ramp. Haven't fished there.

By the way NKlamerus, I'm also from Eugene and have found all your giant bass pictures very inspirational. After a couple years of doing lots of trolling and jetty fishing, I've spent a bunch of time casting worms and jigs this year and its landed me a couple nice fish (not near your monsters though). I find your enthusiasm to dump your nucanoe into any fishy looking pond in the area very motivating. Thanks for sharing with us.

kemfish said:
I fish from a Kayak. I know the deep spot you speak of. Haven't caught a thing there. Have caught at least a small fish or two from most other parts of the pond except for the the shallow basin near the ramp. Haven't fished there.

By the way NKlamerus, I'm also from Eugene and have found all your giant bass pictures very inspirational. After a couple years of doing lots of trolling and jetty fishing, I've spent a bunch of time casting worms and jigs this year and its landed me a couple nice fish (not near your monsters though). I find your enthusiasm to dump your nucanoe into any fishy looking pond in the area very motivating. Thanks for sharing with us.
Click to expand...

Makes all the posting worth it right there! Glad it got somebody out there, let me know if you ever need a new spot or want to meet up, just shoot me a message.

I've slid into most of the spots here, but no longer fish a lot of them unfortunately, just not worth leaving the truck for a few hours (Kirk) or stepping on a needle around the bank. (Delta)

I usually start big and go smaller around that hole, unfortunately they usually prefer a senko of small Texas rig, I've burned all kinds of hard baits through it to no avail.

NKlamerus
Bond Butte was my plan B but couldn't get to my initial spot because of a parade!

Definitely going through some sever algae bloom, I was able to pick up one cruising the bank and another out in a weedless hole.
D
DG1959
green and white Senko fished wacky works good there.

NKlamerus
First trip this year I was out before the sun.

Water level has dropped a couple feet so the weeds are even worse, algae is starting to die off and float, water clarity is pretty bad.

I threw a frog for an hour, first cast with a whopper Plopper got me on the board. Proceeded to catch 6 fish all on a Plopper

Was off the water by 8am

fromthelogo
I love it when bass only slightly larger than your lure smash it. Got to admire their ambition.
You must log in or register to reply here.