There are a million guides out there for battery boxes for fish finders. I tossed a picture of my setup in a Wickiup report and had interest. I wanted a box that could be multipurpose, that I could use to run my fish finder or a laptop or as a large powerbank to run a pump for inflatables. Also, it just didn't make sense for me to buy a bunch of new batteries when I'm sitting on a handful of 20v Dewalt li ion batteries for my cordless tools.

So here are the materials for the build:
The assembly is pretty much red to red black to black, soldering and covering connections as you go, or use some other type of connectors. Initially I built this with out the step-down converter and left it 20v. The 12v socket and switch included USB ports, so I could charge devices via USB, and other devices that used the 12v plug could handle higher voltages like my laptop cord.

It wasn't until I wanted to use this with my fish finder (Humminbird Helix 5) that I needed to dial in the voltage and amperage. The fish finder needed 12v and the documentation required a 3 amp fuse. Swapping out the fuse in the 12v plug/cable was easy enough. I cut the connection I had made initially from the the battery adapter to the switch, and ran the 20v battery into the 24v leads to the converter, then ran the 12v output from the converter to the switch.

This setup can hold up to a 6ah Dewalt 20v battery which will easily power my fish finder all day. Everything ran about $85 total. There are lots of options out there for battery boxes, but this was a great solution for me as it is SUPER flexible in charging a variety of devices, and allowed me to utilize batteries I already owned. One note - I've read that this type of step-down or buck converter will draw from the battery even when there isn't a load so it's common to have a switch between the battery and the converter. I opted to not install one as I won't slide in a battery unless I'm ready to start using it. 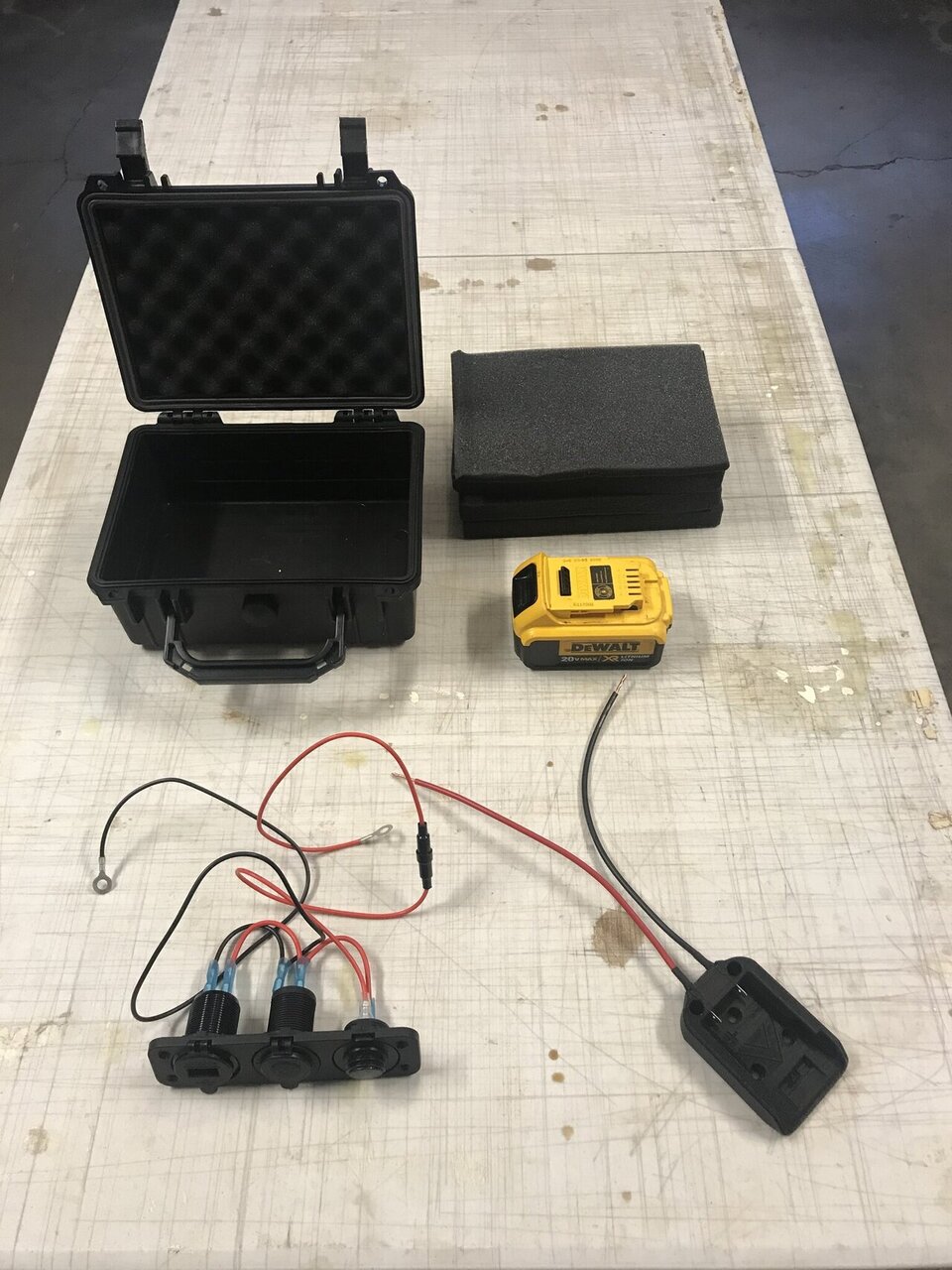 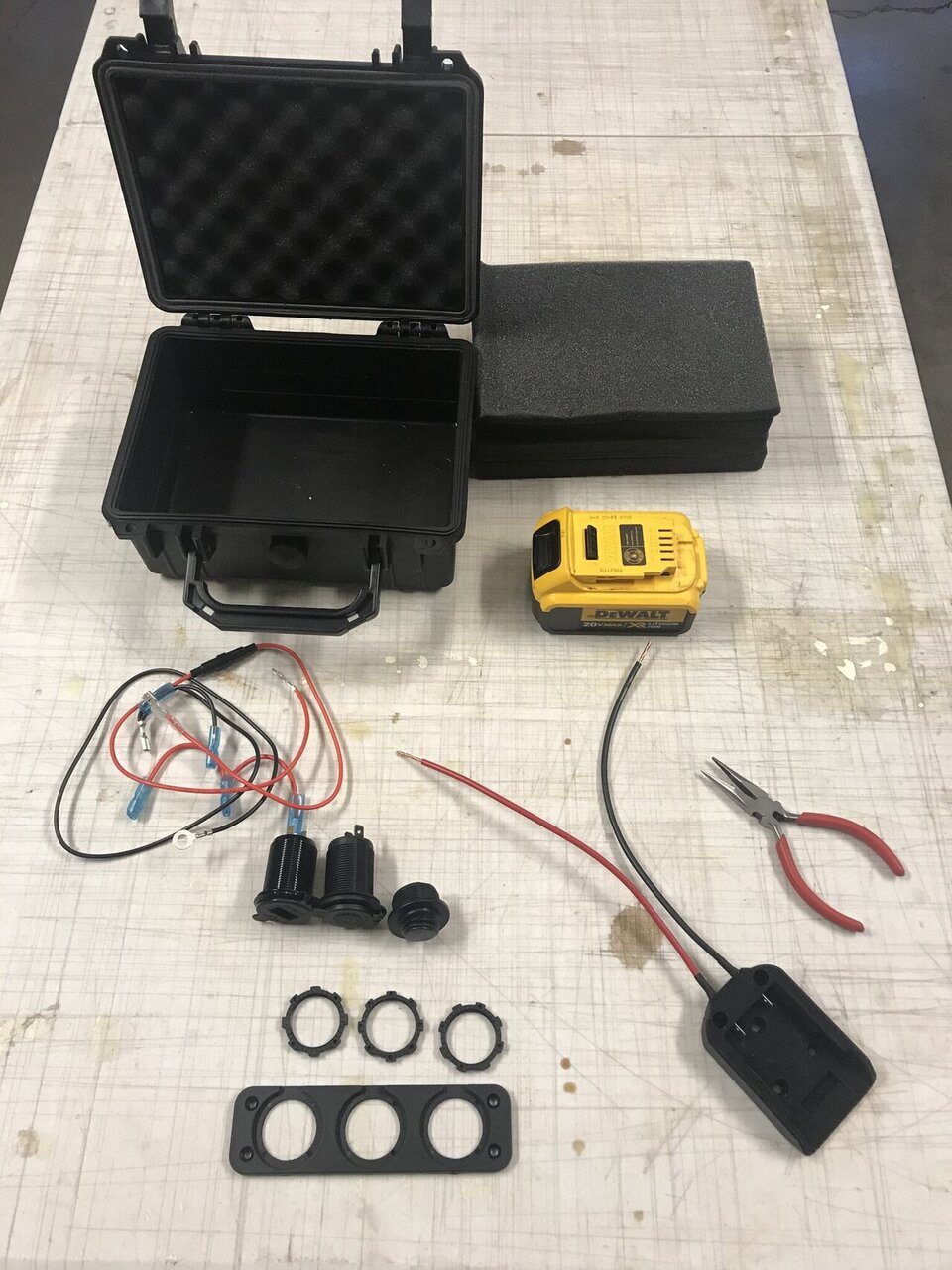 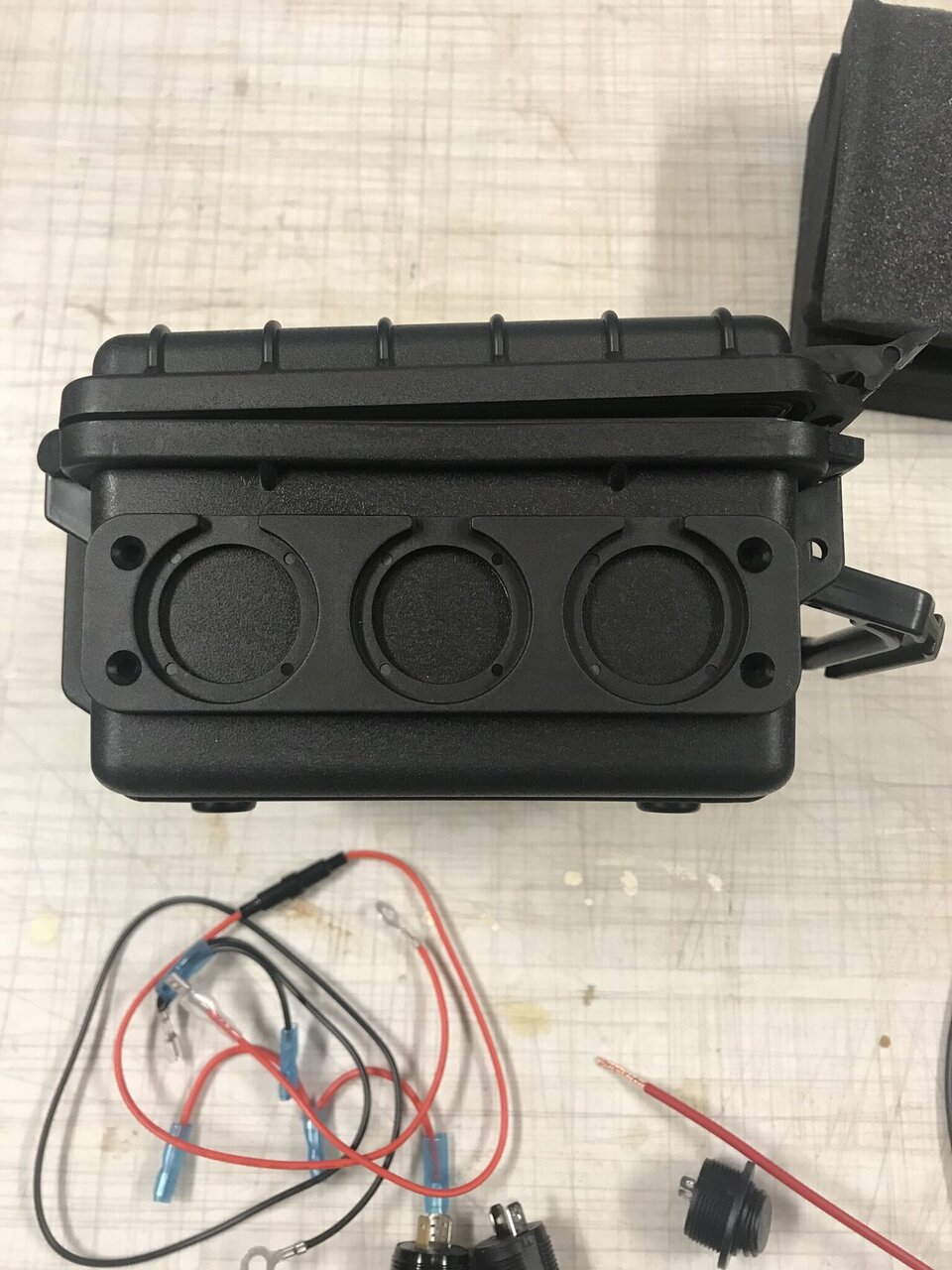 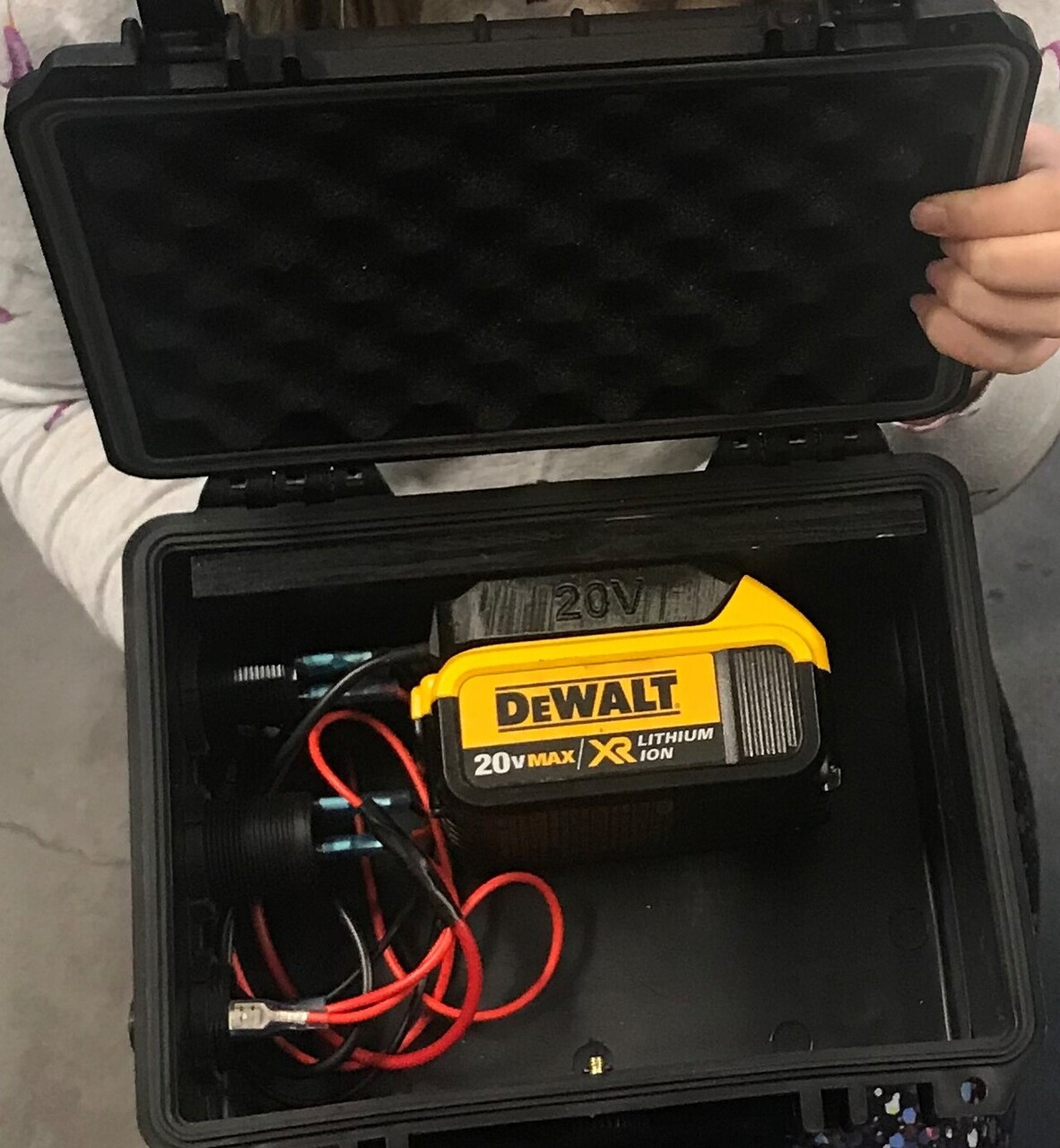 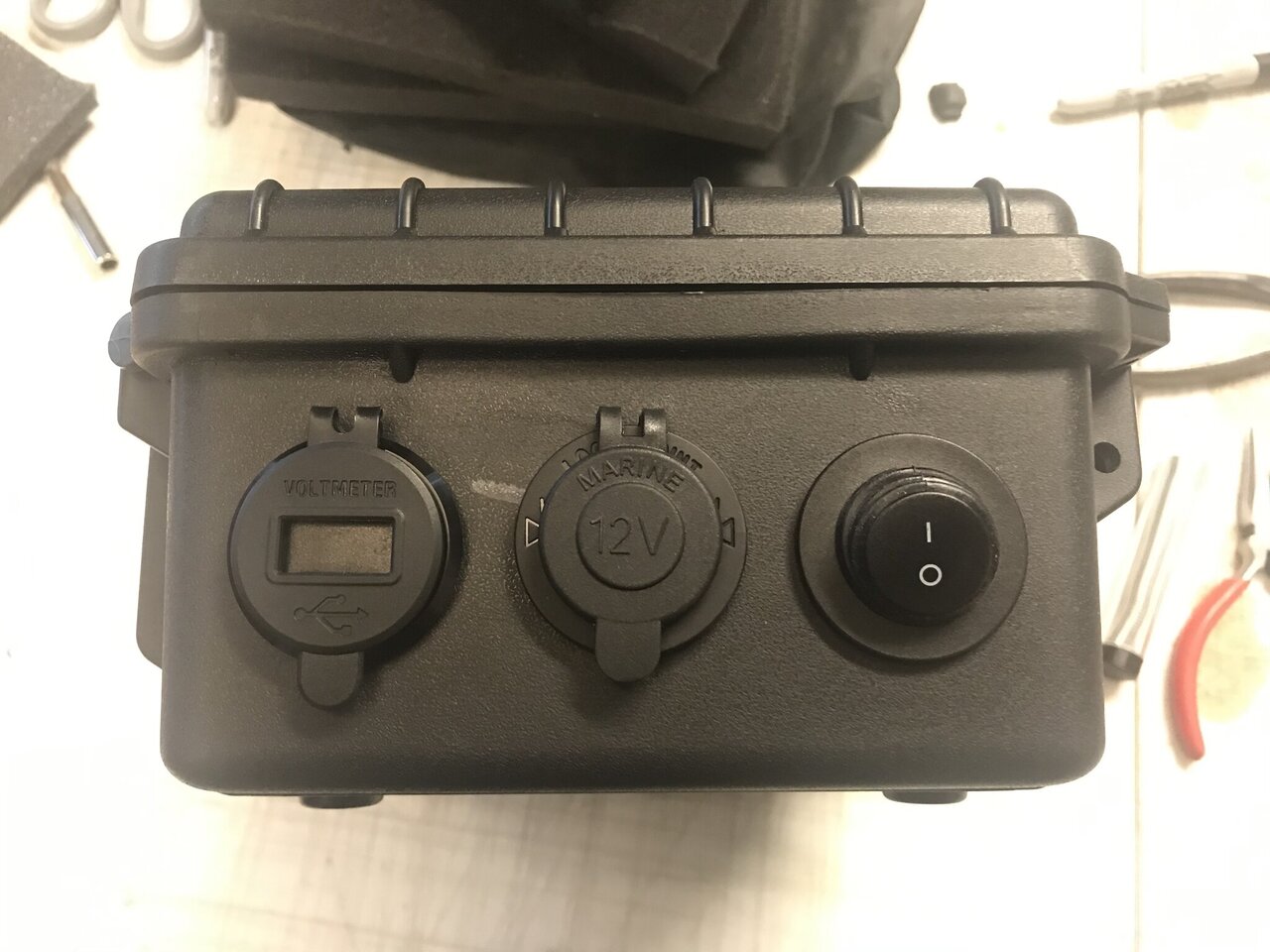 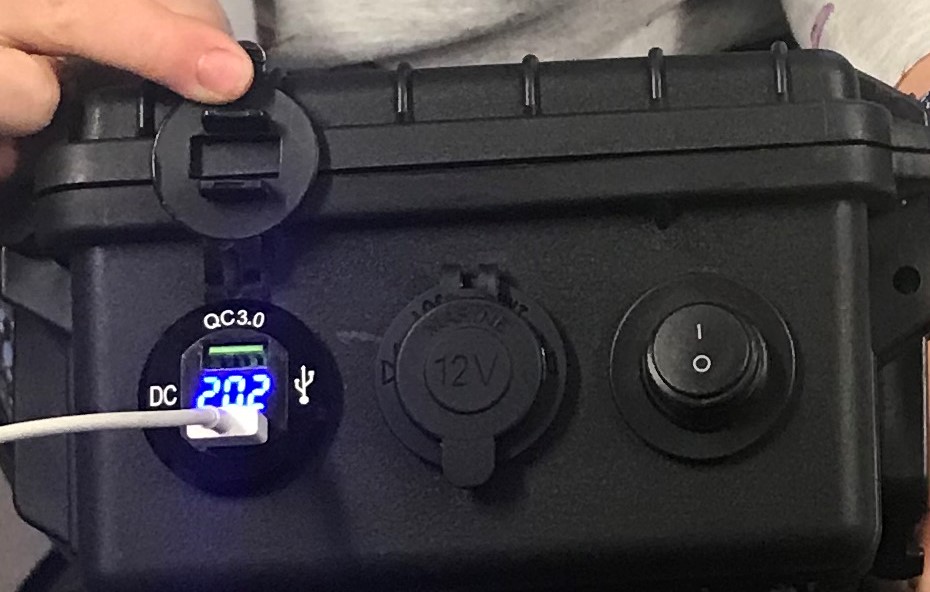 With the step-down converter wired in for the fish-finder. 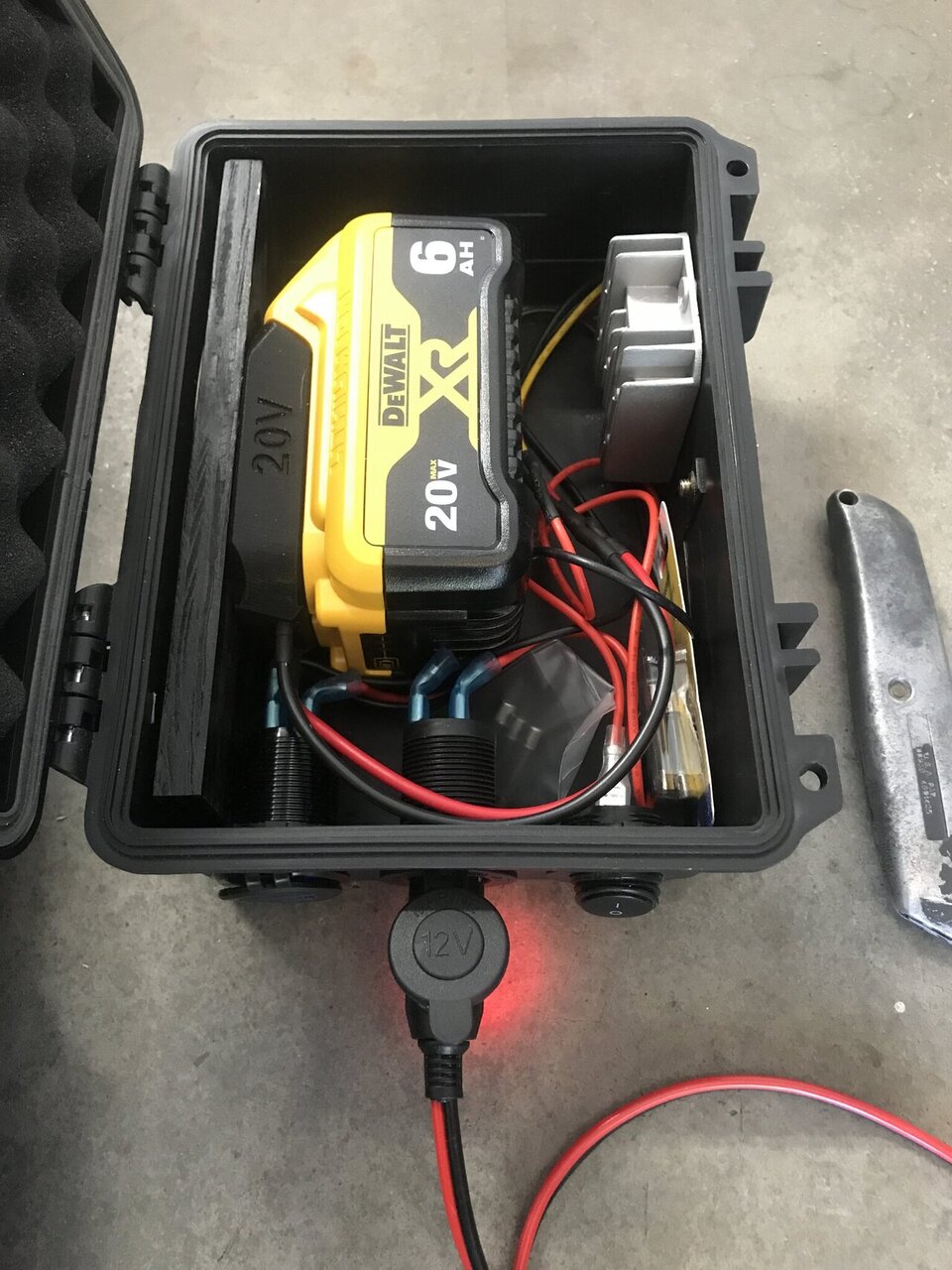 One drawback to this system is the non-waterproof 12v plug sticking out of the box. I tossed the whole getup in a lightweight drybag, and with the cord hanging out just give it a couple turns and clip it to the back of my kayak seat. Works like a champ. There are definitely more elegant solutions out there, but this option kept the cost low and made it multi-function for me.

Welcome any feedback and/or suggestions for improvements. Thanks!

Oh, here is an example of a pre-wired option - https://www.amazon.com/Yak-Power-YP-BBK-Power-Pack-Battery/dp/B06Y15F861

My issue was the price ($100) didn't include the battery, so it didn't seem ideal for what I wanted.

You'll notice my young daughter is holding the box in some of the photos. This was a great project for her to learn a little bit about problem solving, electronics, and some soldering.

IMHO I like to keep things simple. Here's how I did my electronics. I went to goodwill bought the need amount of sacrificial ice chest. Picked up a couple of deep cycle lawn mower/generator small batts. As many as a full size would take up or as needed. The ice chest can be water-tight or vented, you can place them near the bow and mount electronics on them or near the rear or long the rails or even sit on them. small compac easy to carry as many as need for time on the water. Belive me you won't run out of power. If you do! swap out as needed. Tony

Thanks for posting. I've got a box that I use for some small 12 volts I bought on Amazon. They work alright but I like how versatile yours is. I'll probably build one for now with my batteries but with your add on's and no step down converter.

Most Featured
That is really nice @jfrost . I just toss my battery in a dry bag and roll it up (and the wiring too) a little bit. I then store that inside my hull and pull the cables through the front hatch. I have thought about doing something nicer like you have done but it is hard to get up the energy to fix something that isn't broken.

Specifically, I have a 12V 30AH LIon battery for my FF and steadycast (and NMEA2000 network to connect them) and it all fights easily in a 15L dry bag. The battery and network trunk are in the dry bag.

We always used the orange plastic waterproof document boxes but the Apache cases are probably much thicker.

I use DeWalt T-Stak boxes for my tackle and kayak gear, could definitely mod the standard box into something like this although it'd definitely have some extra room