Based on a true story...

P
pinstriper
Four guys were set to go fishing Saturday. We'll call them Spoolboy, Bonker, Pin, and...well, we're gonna leave him out of this story because he didn't go. I won't name names, but if Scooby-do said his name it would come out like "Reynah Re-oh Boy". Said he had tickets to some sporting event and was more interested in that than fishing with us.

Anyway, we headed out at the crack of mid-morning. Bonker may well be the ideal fishing buddy. Has a drift boat AND - get this - access to a family member's powerboat, parked 2 miles from a ramp on the Columbia. Genius. It's like having a buddy with a boat, twice removed !

So we head out onto the Mighty, perfectly timed for the incoming tide, and take our place in the trolling parade.

Now, Bonker is easily the best, and maybe most experienced fisherman in the boat. And it's his boat, so we pretty much do what he says. And he says we're gonna troll spinners behind Pro-trolls. So we do. And about an hour in BAM !! Bonker's rod is in spasm. Excitement ensues as Bonker fights the fish while taking OFF his sweatshirt, eating a sandwich and completely forgetting to show Spoolboy or Pin just exactly how the boat works, including the whole left-right-up-down business - hey, we just ride in boats, we don't know how they work !

So here we are with Bonker reeling hard on the fish, the helm is unmanned, the boat is doing Crazy Ivans and the herd of boats nearby all scatter like a guideboat with a new paint job seeing a volleyball fan coming in to dock. Stay away ! Pin is on the net, which he's never done before but isn't admitting to it, Spoolboy is frantically looking for the cell phone to take pictures, and Bonker horses the fish alongside. One, two, THREE! Fish in the net, a nice Nook and we're in business !

Where's the fish bonker ? No, not him, the thing from Bat Day at the ballgame. We don't have one. This is the first lesson in borrowed boats: bring everything yourself. So Bonker - and this is where he gets the name - hauls off and belts the fish a right cross. Bing, bang, boom. "Look at you now !"

The next three hours pass uneventfully, except we learned the second lesson in boat borrowing - always check the fuel level in case the previous borrowers forgot to fill the bunkers (boats don't have tanks, they have fuel bunkers - I looked it up for authenticity.) Turns out it's just a carburetor on the kicker needing a rebuild and we're constantly feathering the throttle.

So we're out of sandwiches and down to granola bars and the tide is at high slack and these here Protrolls are not working their magic. Pin gets the bright idea to switch things up. I, er, he couldn't find Protrolls at the store but did grab a Slingblade. May as well. And for good measure, let's drop the weight to a 6 oz and put it on a 2' dropper.

30 minutes later that rod looks like the dropper is hitting bottom, but no it's at 45' and the FF shows 54' under the keel. And this fish is unhappy, just screaming line OFF the reel. 10 minutes of fighting, every time the fish sees the boat he dives and runs. Pin and Bonker are doing do-si-does as the fish keeps outsmarting us and catching us out of position and finally the fish hits the deck.

So we put the gear out again and tell Spoolboy - who has a history of letting fish run away with all of his line - the next rod that goes OFF is all his.

Now we had planned on fishing until 4pm. The clock strikes 3:48 and we're looking at each other thinking about going around one more time when the Slingblade rig hits again. Spoolboy wrestles home the biggest beast of the day - a bonafide 20 #-er and we're homeward bound at 4:06.

An unexpected bonus was the boat owners are setup with their own fish cleaning station complete with vacuum sealer and a box of Cabernet. We got a master lesson in fish dissection from Bonker's nephew and left for home with three thoughts:

Hooked Up
I got a good laugh reading this! Very fun and exciting day, like we said "Best day Evvver!".

I like the nicknames. Spoolboy got his from bobber fishing with an unnamed guide when all of sudden he was "out of line".

I think I'm going to get a bonker for the boat, safety for the knuckles when the hooks are still lodged.

I did put the motor in neutral! Love this description, "the herd of boats nearby all scatter like a guideboat with a new paint job seeing a volleyball fan coming in to dock" I would bet the farm you said you'd done the net before, now you have. Three swipes if we're counting.:bleh:

Sling blade did its magic for Spoolboy. I was thinking we should do one more pass so we could all get a fish and boom!

The Aunt & Uncle run a 1st class establishment for sure. Knew you would enjoy the Cabernet.

Casting Call
Nice write-up Mark! Also I know who you guys are each and everyone. Glad you all had a great time. Its been great fishing in my area also. cheers Tony p.s. cognito just incase all went wrong, I get it!!!!!!!

EOBOY
Scooby-do! Really? I think that's Rayrah RehRoh Roy! Got that picture in the middle of the 12th game of the day, my ears were shot from hundreds of Teenage girls screaming, plus the parents. I know you guys had a blast.

Casting Call;n606976 said:
Nice write-up Mark! Also I know who you guys are each and everyone. Glad you all had a great time. Its been great fishing in my area also. cheers Tony p.s. cognito just incase all went wrong, I get it!!!!!!!
Click to expand...

Yeah Tony, the names were changed to protect the innocent. Well then again, maybe not.

Dana I think it was mentioned maybe ONCE, we could be watching volleyball.
O
OnTheDrop
Spoolboy:lol::lol::lol:

hobster
Nice fish guys! Always a great time when everyone gets one :thumb: I'll bet you guys are glad now we cancelled the Timothy trip, huh Pin and Bonker?

C_Run
Nice report you guys. I was wondering about the sling blade you used. Is that just the same little dodger you'd use for kokanee? I'm always looking for a new angle, you know. I see they only come in two sizes.
P
pinstriper

C_Run said:
Nice report you guys. I was wondering about the sling blade you used. Is that just the same little dodger you'd use for kokanee? I'm always looking for a new angle, you know. I see they only come in two sizes.
Click to expand...

The big-uns are like a foot long, maybe a touch more. That one. Not the kokanee sized ones.

I picked up a couple 9" at Fishermans, not sure if they're convenient to where you are. The different action from 1000 Pro-trolls being presented I believe is what was the magic ticket. Good job Mark.
Last edited: Sep 19, 2017
P
pinstriper
Yep, it was really a matter of showing them something they hadn't been seeing for hours on end. It looked like everyone - and I mean EVERYONE was running ProTrolls, which are awesome but so are other things, and variety has value.
H
Hookset
Awesome report. Thank you for sharing.

Hooked Up
Well, there'll be no more right crosses to snuff a fish anymore. After our epic day and possibly reading Pin's hilarious narrative Fred decided to order a bonker for me so I wouldn't impale myself on a hook. Can't wait to try it out! 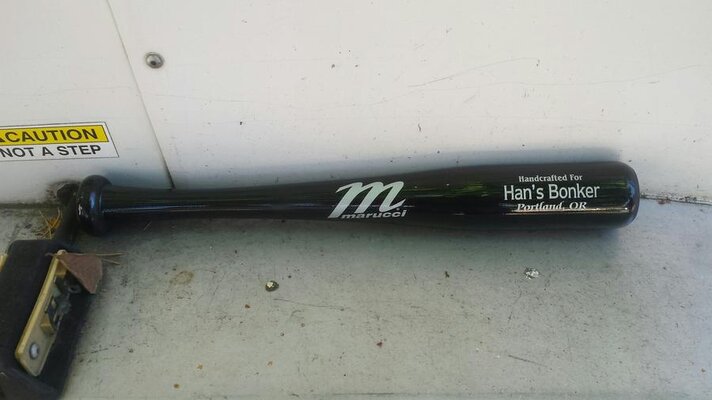 pinstriper;n607011 said:
Yep, it was really a matter of showing them something they hadn't been seeing for hours on end. It looked like everyone - and I mean EVERYONE was running ProTrolls, which are awesome but so are other things, and variety has value.
Click to expand...

Wait -- you mean people caught fish before ProTrolls came along?

Hooked Up
Someone posted on a different thread about a radical new fishing method, worms!
C
Coburg44
Hilarious
You must log in or register to reply here.