There are a number of places to bank fish for salmon on the Columbia River. I've fished Prescott (nearly two hours drive for you) to the west, Chinook Landing to the east, and a few of MANY places in between (social security beach, kelly point, just to name a couple more places).

Rod selection is variable. If you go to one of the popular places (prescott, SS beach, bonniville) you'll see guys using all sorts of different things. The important part is gear that will be able to cast a 6-12oz weight (weight depends on where you're fishing. I generally use an 8oz everywhere i've been) out to where the fish are.

I personally use an 11' Lamiglass Surf King rod. It is a bit overkill...
Sort by date Sort by votes
T
The Nothing
Bank fishing for salmon on the Columbia river

There are a number of places to bank fish for salmon on the Columbia River. I've fished Prescott (nearly two hours drive for you) to the west, Chinook Landing to the east, and a few of MANY places in between (social security beach, kelly point, just to name a couple more places).

Rod selection is variable. If you go to one of the popular places (prescott, SS beach, bonniville) you'll see guys using all sorts of different things. The important part is gear that will be able to cast a 6-12oz weight (weight depends on where you're fishing. I generally use an 8oz everywhere i've been) out to where the fish are.

I personally use an 11' Lamiglass Surf King rod. It is a bit overkill for steelies, but I can only afford so much gear. I use this rod for banking for salmon and sturgeon, and for surf fishing on the coast. Like I mentioned, I can't afford to have a rod/reel combo for everything like some guys. The rod, brand new cost my $90, and the reel about $45. Most guys plunking on the columia are going to be using 9' rods. You'll also want a rod holder to punch into the sand. A 3-4' wire fence post, 1.5" ID PVC pipe and some zip ties and you're set there...

One you have a rod that can cast the weight, things get infinitely different. Everyone runs things a bit differently. Spinglows, corkies, small Kwikfish, hotshots, light spinners, baited with nothing, eggs, sand shrimp, herring, prawns... you get the idea... Here's how I've been doing things though. 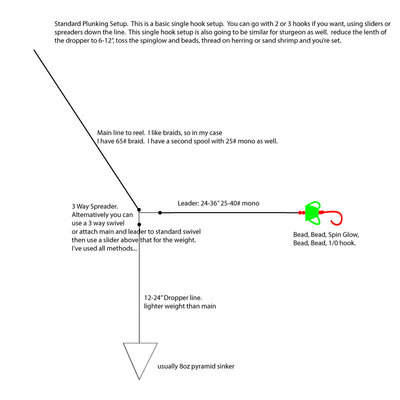 Hope that helps things out just a lil bit. There are a lot of places to fish. If I had things to do all over again, I would have gone to one of the popular plunking spots (Meldrum Bar, Prescott, Suavies) and talked to some of the guys there first. Looked at their gear, saw how they were doing things, then gone out and got my gear. Even still, the first time I went out using the setup desribed above I caught my first steelhead ever.

I remember showing up with no idea what I was doing. I knew the setup (like above) but was not used to, or comfortable fishing in an area where there is a rod in the ground every 12 feet. Persisting on I drove all the way to the end and took the last spot on the beach, tied up my lines and let her go. I was fortunate that the first time I casted that giant rod and that 8oz weight that I didn't snap off the weight, put things right in line with everyone else, and generally didn't look like a fool... I saved that for my second cast....
Upvote 0 Downvote
Solution
A
ArcticAmoeba
Dan, get Lami to hook you up with a surf rod, and bobber fish with it below the hoardes of plunkers. It is the only rod that will hurl that much weight out, and be effectively fishing in the zone. Plunking is just too hands off. So is float fishin, but at least you are holding a rod! Haha!
Upvote 0 Downvote
F
Fishtopher
Yer gonna want something bigger than a 1/0 if yer 'nook fishin'. I dont run a three way because its too easy to tangle up the dropper and the leader. You could toss it out, it could go FUBAR before it even grabs bottom and not even be fishing until the next time you check your bait or recast. I use a wire spreader most of the time as the slider has its time and place, and that place is not where i fish. 11' 20-40lb Ugly Stick, but Ive had my eye on that Lami Surf Rod that's on sale at Fishermans. 25lb main, 20lb leader, 20lb dropper line. IF fishing a snag hole that eats rigs like crazy, just tie a few over hand knots in the dropper line, and thats where it will break every time you get a nooker on, or get yer sinker snagged.

Ive been fishing a super zipper lip spot on the border of Columbia and Multnomah counties that gets up to three deep with rows of rod holders. Luckily there has only been one row up to this point this year. You can seriously watch the fish run up river by way of bells ringin. If you fish a spot like this, watch and learn first. Because if you toss an 5 oz while everyone else is holding with 8's, and you roll down into other fishermans gear, THEY WILL GO CRAZY, and you will be the entertainment for the day.

The setup for yesterday was an 8oz pyramid on 0-5" dropper to spreader, 2 1/2' leader to an Orange Spin n Glo with rubber(black or white) wings.
Upvote 0 Downvote
M
mgdguy
Wow Nothing that is some GREAT info. Love the illustration too!

I've never plunked before and have always wondered: Using that method above, how do you keep the weighted line and the leader line from getting tangled up on casting?? It seems that would be a problem, as well as then not knowing if your setup is sitting correctly in the water... :think:
Upvote 0 Downvote
T
The Nothing
There is always the risk of that happening. I've had it happen on sliding settups as well as spreader setups. Smooth casting helps a lot. Keep in mind that the weight is taking most of the centrifical force of the cast and with its larger mass than the lure/bait, the weight will pull everything behind it (the weight will lead the way and pull everything behind it). Watch your setup hit the water and you'll learn to tell the difference between a good landing and a bad one. Most tangles happen in the air, and only get worse after they hit the water. Before casting, make sure there is no line twist and the leader and dropper are separated.

Plunking taught me to keep your leaders fresh. the mono leaders take a good amount of stretch and can get pretty nasty pretty fast, especially after landing a fish. I reused a leader that i caught a lil steelie on and it would cause instant tangling. The spinglow wasn't allowed to spin freely because of kinks caused by the stretching. Every day and every fish now gets a new leader.
Upvote 0 Downvote
F
FishKiller23
A lot of people using 9-11 ft rods myself I use a 8 FT rod and I can cast a 8 OZ weight just fine. Like mentioned above depends were u go. I been to prescott a few times this year and any where from 6-8 oz weight will sit just fine. I run 2 glows some times 3.


If I am running a single glow i'll use 20-24 inch leader and tie it to a snap swivel and then snap it to the spreader. Then just run a snap to the weight then straight to the spreader no dropper. Ive done ok not great got 4 this year so far with this set up.
Upvote 0 Downvote
Y
youngbuck307
so your stuff is like on the bottom then??? kinda good i think was reading last year when guides were trolling they were only using under 6 inches they said the fish were way holding on the bottom
Upvote 0 Downvote
F
FishKiller23
Yea trolling is a bit different some times. What I did was searched around for a bank spot that i liked and had a great time at and I decided to become a regular met some other guys that have fished there for several years and they showed me the ropes. I am sure there is tons of people who wouldnt mind telling you how to do it but I can tell you there is some bankies who are just jerks.


Youngbuck as soon as I head out again lets go. See if we can get you into some fish if not atleast it will be a good time.
Upvote 0 Downvote

Walleye from the bank

Good spot for a shorebound angler to catch a salmon