Josh and I grew up hammering each other on the football field. As time doe`s to folk, we drifted into our own worlds. Well when his boy Alex (whom you met last week) came up, his Mom saw it an excellent opportunity to get Josh and I out in the "field" together again. My brother knew him well too, so he tagged along, of course! So Josh took Monday OFF and we headed out for springers. Brotha Bob landed the 1st after Alex had missed the 1st bite. Josh was hot on his heals and was handling it well, only having fought fish from a boat. I was so excited that I never even thought of the camerafor this fish. We got to the next hole and WOW!, let there be fish. Alex got us going again with a nice lil spring run.
The action shot: 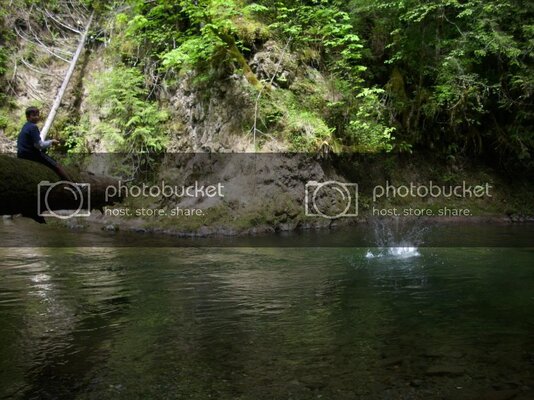 In case ya`ll are wanting to go to THAT hole, I was there the very next day, NOTHIN! Walked up from there with very little seen, so I`m guessing they fell back. FYI!
Here`s Alex with his limit: 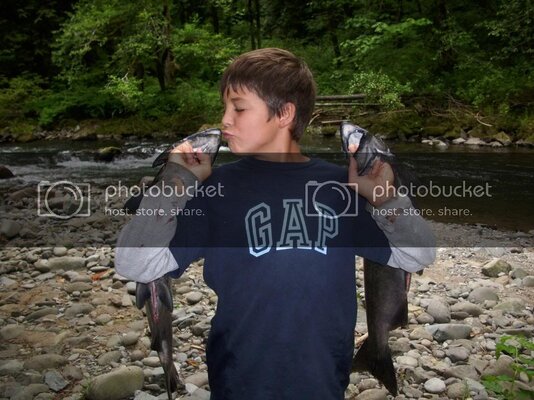 And him and Josh with our limit, minus the 2 bleeding up top: 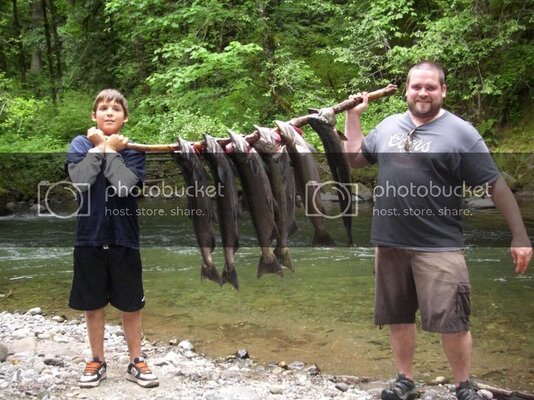 The water soooo frickin low! Black and purple are crrrrrrrrrrushin right now. Was up again with dad yesterday: 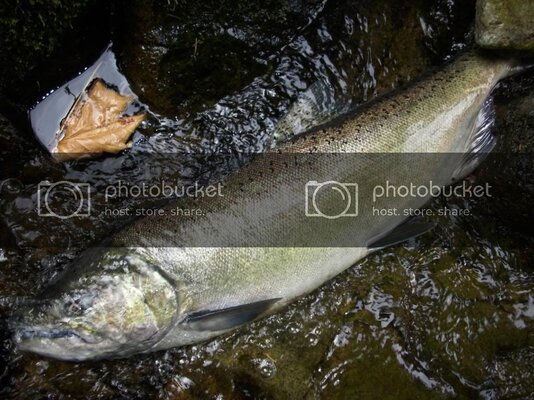 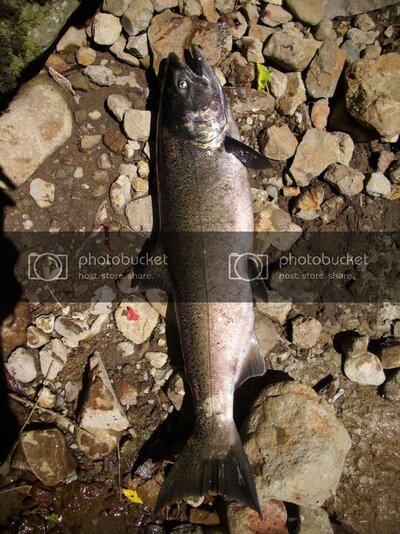 Black! Plus the only other 2 fish in that hole slammed our stuff, but we missed. Then the bite was OFF, weird:lol: So we headed over to the Sandy up by Revenue. No hits in the hour I fished it but was joined by an egg thrower who had been doing well over the past week. FYI!
Ran into some neighbor kids from the area having some fun of their own! 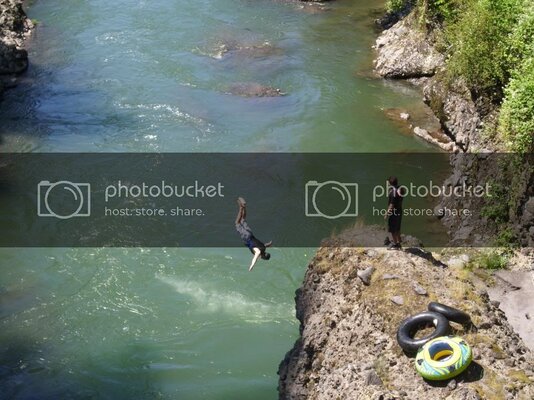 It`s been reel, it`s been fun! But it`s time for change of scenery and pace. Springers are big and strong, but don`t have the energy, acrobatics and headshaking madness of the summer run I will now be pursuing. Not that I`m totally done with `em, just need a new push and some summer fun!! Get out yer black and purples and go to the crick. Or yer eggs and head for the Sandy. It`s approaching peak season on the upper stretches.
L

nicely done guys~!!!! looks like fun was had by all
R

what creek was that

Rascal said:
what creek was that
Click to expand...

Well, uuuuhhhh, Eagle. But the pic with the kids jumping is The Sandy. I really didn`t think ANYONE would wonder what crick I was fishin:lol:
R

metalF you are the man!!!
C

metalfisher76 said:
Well, uuuuhhhh, Eagle. But the pic with the kids jumping is The Sandy. I really didn`t think ANYONE would wonder what crick I was fishin:lol:
Click to expand...

Nice Shots!!! I know from the pics exactly where you were at. I still have not sought any springers @EC....I might have to wait until Coho season to go there and just concentrate on UP river areas as you mentioned. Great report and nice looking beasts. I gotta see some fly fishing for nook action someday:clap:
S

Did you catch any of those on spinners? I have yet to have any luck with springers biting my spinners.

I make my own spinners, all black components. They are a Jed Davis design, and I know that they work on Fall 'nooks. I'll bet that they would work on their Spring cousins too.

P.S. If you do not have Jed Davis' book on spinners for Salmon, Steelhead, and Trout...you're library is minus one of the best books on the planet!
T

ur makin me crazy man, I gotta get out there!!!
M

STEELseeker4086 said:
Did you catch any of those on spinners? I have yet to have any luck with springers biting my spinners.
Click to expand...


No, but I know of 1 that was taken this year and several last year.
B

way to go make a hell of a ending to the season bro.... im almost ready for some high flying summers my self yea getting bull doged down river is fun and all but i want to see something come flying out the water!
M

Thanx guys, I can`t claim any of those on the P.A.T. yarn this last week, had to release one of the kids with it, fouled. But I`ll put it in front of some steel Saturday. Those springers actually come out of the water a little up there, no where else to go when it`s that low. They just don`t do what steel doe`s while up there, they don`t get as high!
A

Nice lookin fish brotha man. It's ok that it wasn't on Pop-A-Top Yarn, I won't hold it against ya too much.
K

Nice job metal, thanks for sharing
You must log in or register to reply here.

What do you think of this?