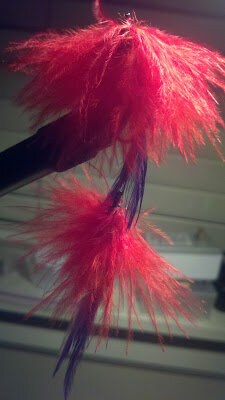 Caught this buck at 10am on the fresh tied fly... 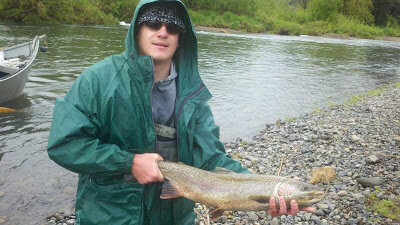 Location
in my tracks

Way-ta go! Guessin' with that fly you were swingin'?
E

Yep tossed on a sink tip and went swinging away.... took the fly at the verrrrrrry end of the swing..
J

They do that with my jigs all the time. Always when it's swinging in the very last second before I would start reeling in.

Location
in my tracks

Such a vicious take - absolutely love it! Deadly lookin fly too, was just checkin' it out in the tying thread...
E

Thanks bro... I screwed up the order for tying and tied the front fly 1st... making tying very hard to do on the back fly.. leason learned.... took 45mins when it should have been 10...

The fish went tail walking a couple times.. thought for sure I was going 0-11..
G

Nice fish... congrats on the fly and the catch

way to go bro. that fly may be beautiful but that steelie tops it! congrats :clap:
T

nice fly nice fish it got to be great to catch one on the fly you tied yourself.
L

Watched you reel that fish in from downriver. I was thinking man this guy sure has lots of slack in his line, I would suggest stripping line when you have all that slack . Great job on catching you're first Steel on a fly. LOL at your buddy who said " Its bulldogging " it " Must be a Springer " :lol:
E

Hahah thanks.. yea I actually caught it on a completely blown cast my loop colapsed but figured "screw it, let just see what happens".... I seems like you can make a perfect cast and no fish cares to take, screw a cast up and its 'fish on' hahaha..
W

Good job man!!!! steelhead on the fly, the best feeling ever specially when they make some jumps!!!!!! :clap: :clap: Man i want to go fishing now!!!! rotest: rotest:

That was a fun trip. Eggs talked me in to coming down to be his witness. When I got to his house at 5am he showed me that fly. He had just made it the night before and I had to admit it was a good looking rig, especially with winters, summers and chinook as the target. We hit the river and were soon joined by Ninjia and Eastcoastborn. We were all swing flies on spey rods. A couple of fellows in a driftboat came by and we were shooting the breeze when one of the announced "hey your buudy has a fish on." We headed down towards Eggs to give him a hand if needed about then that steelhead came about three feet out of the water doing a couple of full cartwheels and making a downstreem run. Eastcoastborn gave Eggs a hand landing the fish while Ninjia and I sat on the bank offering sage advise like "nice fish don't lose him, and are you sure it's not a carp". I was something to see, a buddy catching his first steelhead on a fly, a fly he designed and tied the night before. Way to go Eggs.:clap::clap:
Last edited: May 8, 2011
B

Was fun to watch for sure. I noticed you were swinging and letting your fly work in the current below you. Awesome looking fly. Should have some great days ahead if you can whip that thing out around our Floats and bait
M

That deserves an atta-boy! Nicely done!
You must log in or register to reply here.

Steelhead beginner on the fly

A
What did I catch?

S
Is steelhead fishing all about knowing where they are?