L
lilsalmon
So, I bought this awesome calendar at the Expo that has some very interesting info in it....I am going to try and share some of it with whoever wants to read this. I know your idea of a calendar wouldn't be trout....hehe.....but this is my pinup of choice right now. Excuse the pic, it was taken on my cell...

The high desert of southeastern Oregon receives little precipitation--in the Trout Creek Mountains, only about 8 to 10 inches fall each year. Half of this water arrives as snow during the winter months and feeds Willow and Whitehorse creeks in the spring. These creeks serve as oases for a variety of vegetation and wildlife throughout the year. One inhabitant found swimming in these waters is the Whitehorse Basin cutthroat trout, a unique form of cutthroat related to the Lahontan and Humboldt cutthroat trout that has been protected under the Endangered Species Act since 1973. However, despite its protection under the Act, the U.S. Bureau of Land Management permitted open cattle grazing throughout the Whitehorse Basin, which caused progressive stream degradation and steady declines in fish populations. In the early 1990s, the Bureau altered its policy by cooperating with environmental groups, angling organizations, the U.S. Fish and Wildlife Service, cattle ranchers, and a host of other associations. The results were encouraging, and the riparian areas sprouted willows, alders, wild roses, and other vegetation, which shade the streams in summer and prevent bank erosion. Insects attracted to the vegetation and to ample moisture returned in fair numbers, too. This meant good things for the trout--cooler, deeper water and a steady supply of food brought the fish back, and their numbers increased appreciably. Indeed, portions of the creek were opened to catch-and-release fishing in 1999.
The Whitehorse Basin cutthroat trout is greenish bronze along the back and softly pink and yellow on its flanks. It has round spots evenly scattered above the midline of the fish and even has spots on its head, an unusual trait for inland cutthroat. These fish average between 6 and 14 inches in length, depending on availability of food and suitable habitat.
J
JeannaJigs
I have the same pinup
B
bigsteel
nice write up rose!!!!!!!!!!!!
S
Spydeyrch
Very cool pin-up! I wish I had one of those. Although I don't know where I would post it as my wife would probably say that it doesn't go with the house's decor. hahahaha :lol:

-Spydey
D
Drew9870
The old ''farmer and his cattle'' situations really bug me, they are so worried about themselves, their cattle won't go extinct, these fish can.

Of course, farmers are going to do what they can to survive, but they can also strategize their everyday life to cause minimal effect on waterways, but a good percent of them could care less as long as they are happy and making it through life. I understand that even a town needs resources which come from a lot of farmers, but there should be alternatives to using the river that supports endangered life, and the farmers should be responsible for figuring that out.

Nice post Rose, inspires me to go out and try to find some of the species of Trout we have.
Last edited: Jun 8, 2011

brandon4455
wow thats cool. thanks for sharing rose. i enjoyed reading that
L
lilsalmon
Thanks all. I was really really bored the other night. I might add some more just for shirts and giggles....My intent is not to make everyone go out and slay some endangered fishes but to just give some interesting information.....This is probably the best calendar I have ever purchased....It is now hanging over my Justin Bieber calendar....JK....:lol: I gave that one to Jeanna...JK again, she already had one...again, JK...Anywho, to be continued.

Gunga
Does anybody know where i could get that same calendar at or was it just sold at the expo?
L
lilsalmon

youngfishtyler said:
Does anybody know where i could get that same calendar at or was it just sold at the expo?
Click to expand...

Mitch at Two Rivers Fly Shop here in Albany had some.....I will check for you

Gunga
You dont have to check for me i live all the way up in hillsboro.
L
lilsalmon

youngfishtyler said:
You dont have to check for me i live all the way up in hillsboro.
Click to expand...

As you wish....but its no problem
L
lilsalmon
I really do need to get a life...hehe

Bull trout are native to northwestern North America in only the coldest streams and lakes. Although similar in appearance to bull trout, the hybrid fish can be recognized by the presence of multiple spots on the dorsal fin and spotting on the tail fin. Pure bull trout have spotless dorsal and tail fins and may not be kept by anglers under any circumstances. This has led to a phrase promoted by fishery managers, "Fins black, put it back." Bull trout are particularly susceptible to overfishing and to changes in habitat due to pollution, logging, road building, streamside degradation by livestock, and other factors. They also readily hybridize with stocked brook trout (Salvelinus Fontinalis), which are native to eastern North America. Bull trout and brook trout both spawn in the fall, and select small stream habitats to deposit eggs. This mingling of two different species has caused a degradation of pure populations of bull trout and eliminated bull trout completely in many of their native waters.
On June 10, 1998, the bull trout was designated as threatened under the Endangered Species Act. Then, in 2004, in response to a court order, the U.S. Fish and Wildlife Service designated approximately 1,748 miles of streams and 61,235 acres of lakes in the Columbia and Klamath River basins of Oregon, Washington, and Idaho as critical habitat for the bull trout.
Although the bull trout has been wiped out in most of its native habitat in the lower 48 states, federal, state, tribal, and private conservation groups are working with much success to preserve and improve environmental conditions.
J
JeannaJigs
Lol
F
FlyBum
Speaking of cross breeds, do they have the "Tiger Trout" in there? (brookie X brown mashup) That's one that I'd really like to catch in my lifetime.
L
lilsalmon
Nope...that one isn't in there
G
GDBrown
Bull Trout Reintroduced in Upper Clackamas River.

I found this on the US Fish & Wildlife web site. 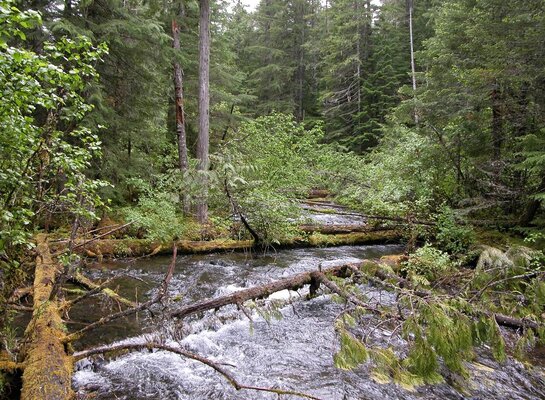 A Final Rule and Environmental Assessment are under development and anticipated to be completed in spring 2011. The Fish and Wildlife Service, along with our project partners, plans to begin translocating bull trout from the Metolius River to the Clackamas River in early summer 2011.


The site where they were reintroduce is near river mile 65, well above the Oak Grove fork.
F
FlyBum
That's great to hear!! My friend's sister is doing her Ph.D. thesis on Bull Trout spawning habitat and survival rates on the Metolius currently. I wonder if she will be a part of this project as well? It would be great to see the Bulls on the rebound
L
lilsalmon
Nice one Gene....
You must log in or register to reply here.

B
Bush policy on bull trout reversed by USFW