GRANTS PASS, Ore. (AP) -- The Obama administration has issued its final rule on critical habitat for the bull trout, one of the most fought-over threatened species in the country the past two decades.

The rule issued Tuesday by U.S. Fish and Wildlife Service reverses Bush administration policy on endangered species by recognizing the importance of protecting habitat to restore fish and wildlife in danger of extinction.

The 2005 critical habitat designation was struck down by a federal court, and an inspector general's report found improper political influence went into its creation.

The new rule greatly expands the miles of streams and areas of lakes and reservoirs deemed essential to restoring bull trout in Oregon, Washington, Idaho, Montana and Nevada.

I'm sure Bush and Obama don't even know what a Bull trout is. Funny how the Bull trout has come back in great numbers in the last few years.
B

and here was the fly of the day:lol::lol: 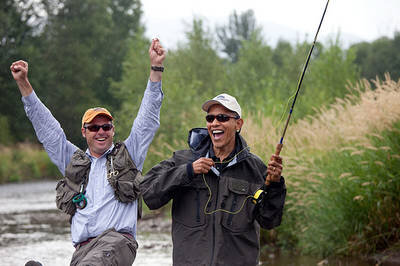 The reversal comes with a 5 to 7.5 million dollar cost to the tax payer over the next 20 years covering research study. This is something to keep your eyes on to see if fishing in those areas will be restricted. Where will it end?
Last edited: Oct 12, 2010
T

I WONDERED IF THEY STUDIED THE IMPACT BULL TROUT HAVE ON STEELHEAD AND SALMON POPULATIONS. From What I understand They prey pretty heavy on smolt and eggs.
J

troutramp said:
I WONDERED IF THEY STUDIED THE IMPACT BULL TROUT HAVE ON STEELHEAD AND SALMON POPULATIONS. From What I understand They prey pretty heavy on smolt and eggs.
Click to expand...


But aren't they endangered species? Forgoe one for the other for the sake of sportfishing? Perhaps I'm missing something here, but correct me if I'm wrong.

If Obama's pockets (or those of his supporters and lobbyists) get lined w/ a fresh influx of cash..."it" will happen...whatever "it" may be.
B

I guess I should have edited the article to remove all political names... then perhaps we would actually be discussing the trout.
T

I dont quite understand your reply. Are you asking if Bull Trout are an endagered species? And what could you be corrected for you made no statement of fact or precieved fact?
O

Don't worry about it. After the election two years from now it will be re-reversed.

Sorry BDP, but the thread looked political to my peepers.
B

It's not at all political, it's about restoring a native fish to the waters it once inhabited. I'm really kinda shocked at some of the replies from guys that I know are all about catch and releasing native/wild fish. The reason this needs to be done is because for years there habitat was destroyed by us, not only that but for years anglers thought of them as a trash fish and would even goes as far as to throw them in the blackberry bushes.
O

Everyone's for fish habitat restoration to strengthen the numbers but it just scares me to think that somebody could be authorized to shut down a fishery even if the study is inconclusive. Who knows, there could be some hidden agenda regarding those decisions. I know I sound silly but I just don't trust anything our government is doing these days.
T

I fished the upper malheur and upper john day there are bull trout in both of those streams. There are postings everywhere to help people identify the fish and know the differences between a bull trout and a brookie. You are still permited to fish these waters and you can catch a bull trout in there, but you have to release it of course. So i assume they have been protecting the bull trout in these watersheds in this manner and I have no issue with that, but if they shut those streams down in the name of bull trout preservation I would not be ok with it.
You must log in or register to reply here.
Top Bottom