E
Erik5252
I just moved here from Wisconsin and I’m trying to get into stream trout fishing. I fished musky and bass religiously back home. Learning how to trout fish feels like learning how to fish all over again I really am looking for guidance on some locations within a couple hours of Albany area. I have the rod and reel setup and I brought all my small spoons, mepps, flys etc so I have what I need I’m just missing location. I checked some places on Google earth and quartz creek looks decent I think, I know season opens may 22 so I’m limited to where I can go right now but I’m just looking for some opinions on a couple spots anyone might be willing to give up to help me get on fish so I can get a feel for what I’m doing.
Thanks,
Erik

jamisonace
I don't know anything about the regs for trout on the santiam but I would think that would be a good option. Lots of water to explore if its legal. The Mckenzie is within your range. A great wading spot I used to frequent when I would travel between Salem and Bend is high up hwy 22 on the N. Santiam. In my opinion, explore the waters close to home and find something that works in your area.

rogerdodger
Welcome Erik! I used to travel to Eau Claire/Chippewa Falls on business now and then in the '90s, usually the middle of winter, never got to fish but had plenty of good beer in Wisconsin.

I think you are going to find lots of places to fish trout (and steelhead, more on that later) year round and even more between May22 and Oct31.

First OFF, Oregon regs are like onions and Ogres, they have layers- Statewide, Zone, and Exceptions. Each layer 'over rules' the previous layer.

Statewide regs give you all sorts of rules for gear and methods and such, important to read through all of them and ask questions.

Let's use Quartzville creek (flows into Green Peter reservoir) in the Willamette zone as an example. Willamette Zone regs tell us that trout in streams are C&R only, open May22-Oct31, artificial lure only, rainbow over 20" considered steelhead, plus a few more things...UNLESS NOTED IN EXCEPTIONS. So any stream in the Willamette zone not listed in Exceptions follows all these rules. In Exceptions, Quartzille creek is listed!

So those 3 items, and only those, from the zone rules are changed for Quartzville creek.

One more thing, if you don't see anything in Exceptions for a smaller stream/creek, make sure and check the larger river that it flows into, sometime there will be a "all tributaries not listed in Exceptions closed to fishing" notation.

Now, have you considered also fishing for steelhead? Let's use the Santiam River (Mainstem) as an example, under Exceptions here is what is modified from the Zone regs-

You will see that it is open for hatchery steelhead all year and a steelhead is just a rainbow trout that has gone to the ocean and returned but for consistency, ANY rainbow trout over 20" is defined and treated as a steelhead. (rainbow under 20"- trout, over 20" steelhead, in coastal zones it's 16"). And how do we fish for steelhead? Very similar to trout- spoons, spinners, beads, jigs, plastic worms, and when allowed, eggs. Believe me, I have lots of experience releasing trout while steelhead fishing. lol

I'm not in any way suggesting this is a way to get around the regulations but rather that the activity of stream fishing for trout and steelhead is almost the same thing, with steelhead, in my opinion, being giant p*ssed OFF rainbow trout that visited the ocean and have returned to torment us. ¯\_(ツ)_/¯

That said, there is a really important licensing item you cannot overlook-
Whether or not you have any intention of retaining a steelhead, if you are fishing a stream open for steelhead but not for trout, must have that combined tag.

Summary- Oregon regs have layers but aren't that bad once you get familiar with the format and steelhead are just big trout, mean nasty money eating trout. cheers, roger

troutdude
Hard pressed to add anything to Roger's GREAT examples above...other than Quartzville Creek is a BEAUTIFUL stream. And at the mouth you can also catch Kokanee schooling around, with spoons (more of a jigging approach with them). There are also Chinokanee (land locked Chinook Salmon) in Green Peter Reservoir. Which spawn in QV creek...so be sure and KNOW the regulations, PRIOR to fishing for them. Our Game Wardens expect to know the laws, before you drop a line into the drink. So feel free to ask questions if you need assistance.

troutdude
@Erik5252 if ya feel like an hour drive to Newport...there is Olalla Reservoir, north of Toledo OFF Hwy. 20 (go past the Olalla golf course). Then, on the north end of Newport, OFF Hwy. 101 are Big Creek Reservoirs #1 and #2. The upper lake is #2 and has tons of spots to toss lures or bait from shore.
Last edited: Apr 11, 2022
E
Erik5252
You guys are a god send for getting back to me I really appreciate it! @rogerdodger Chippewa falls is where my favorite beer “leinenkugel summer shandy” is brewed and I have fam in eau Clair. I think my first shot is gonna be Quartz creek. I’m more than willing to fish for anything that bites and tastes good. I’m hoping quartz offers me some easy picking fish just so I can get the feel for the fish so I have an idea when I fish more difficult spots. And seeing as bait is legal in quartz would worms be a hit? I did a tiny bit of brookie fishing on small streams in Wisco and we were just tossing worms in deep pools and bouncing off the bottom and that worked really well for us

troutdude
@Erik5252 FYI...it's Quartzville Creek and so named because their was a gold mining camp, up there, WAY back in time. There are still some gold claims along there too. So don't get caught trying to pan for any...wouldn't want to see you "mysteriously disappear" for claim jumping. ;-)

But seriously...I've caught LOTS of trout by dropping a worm into the drink like that. Often with no weight, other than the worm itself. I've never used that method in Q.Ville per se'...but it has worked in every other stream around here.

Now to reveal a secret weapon...I have personally had 30+ fish days, using a Rooster Tail in the Fire Tiger pattern. The Q.Ville trout LOVE THEM!!! You'll want to use smallish ones in Q.Ville for the riffles, and larger ones, for the deeper pools. 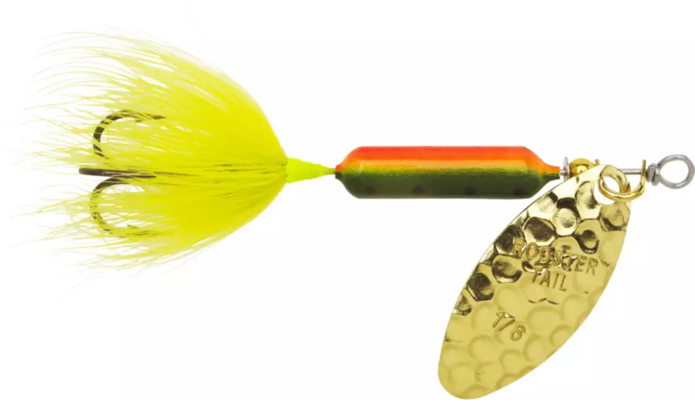 Note: the OP was asking about stream trout fishing. Pretty much all lakes are open all year for trout.

No_Bad_Skunks
Come May 22, the coastal rivers open up for trout fishing. In your area the big three are the Siletz, The Yaquina, and the Alsea. Bait is okay in the Siletz, but the other two are lure only until after Labor Day, (except in the tidewater.) The trout in these rivers are coastal cutthroat, either native or searuns, though the latter pretty much confine themselves to the tidewater areas until later in the summer. That Fire Tiger Roostertail you saw pictured above is deadly on these cutts. 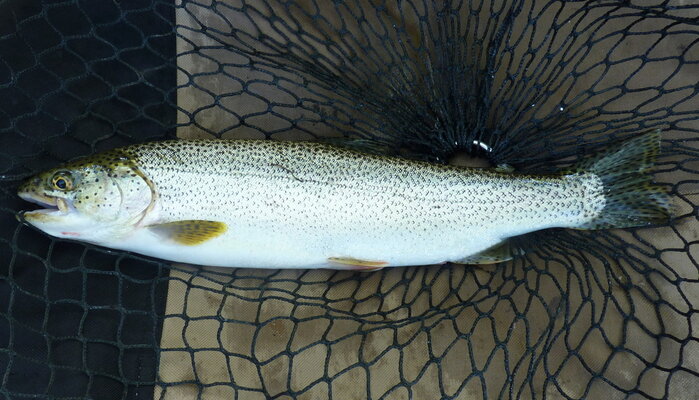 troutdude
For Sea-run cutties (a.k.a. SRC's and or Bluebacks)...small brown Rooster Tails are also quite deadly. As they mimick the fry of crawdads, which Bluebacks gorge upon in freshwater. Fishing generally begins, as mentioned, in July for Bluebacks.

Raincatcher
@rogerdodger, yeppers, I read the whole post, too. I figured in case he didn't want to wait another five weeks to sample our trout fishing, he could become familiar with Oregon's most popular state parks and try his hand at several places to catch fish. He can also stop off at several parks on the way up to Detroit and explore them. Of course, he will also see the results of the Beachie Creek fires from Labor Day 2020, which is heartbreaking yet beautiful in as much as there is a lot of new growth and rebuilding being done.

P
pcstock
Dont forget about those pesky "In Season" Regs. These are most overlooked regulations since they are not the most easily found.

troutdude
Oh yeah...don't forget that you need a Columbia River Basin endorsement with your license too.

Raincatcher said:
@rogerdodger, yeppers, I read the whole post, too. I figured in case he didn't want to wait another five weeks to sample our trout fishing, he could become familiar with Oregon's most popular state parks and try his hand at several places to catch fish. He can also stop off at several parks on the way up to Detroit and explore them. Of course, he will also see the results of the Beachie Creek fires from Labor Day 2020, which is heartbreaking yet beautiful in as much as there is a lot of new growth and rebuilding being done.
View attachment 638848View attachment 638849View attachment 638850View attachment 638851
Click to expand...

Good intel @Raincatcher!
You must log in or register to reply here.