bass
I hit the upper Willamette on Saturday. I was a little worried since the water temp had dropped from 68 to 61 over the course of the previous week. I was not sure what kind of mood the bass would be in and even what stage they would be in (spawn, post-spawn, summer).

To make a long story short it ended up being an amazing day. The topwater bite was on fire through lunch time and the fish kept biting well all day long. All my topwater fish came on a Sammy (stick bait). I through a plopper style for a brief period when the wind picked back up but the Sammy was the deal for me. I caught 57 smallmouth on the day with a 3lb 0z being my largest.

One of the many things that made the day special was the huge number of pound and a half to pound and three quarters sized bass. There were certainly plenty of dinks but I think this may have been a record number of fish over a pound and a half in a day on the Willamette for me.

The day was pretty magical from the get go - nature activity was firing on all cylinders. Early in the day, right after I watched a beaver swim by I got to watch two otters climb up on a dock and frolic around. There is a little footage of that in the video. Multiple times during the day an osprey came swooping down for my topwater. You know you are doing something right when that happens!

In addition to seeing bass chasing bait all over the river I saw several carp jump and I believe I even saw one sturgeon jump (which is rare in the upper river).

The bass never stopped biting all day long. When the topwater bite would slow for a bit I would start catching them on the 3" white swimbait or a Ned rig. Just crazy good fishing all day long.

Here is a picture of my first fish of the day: 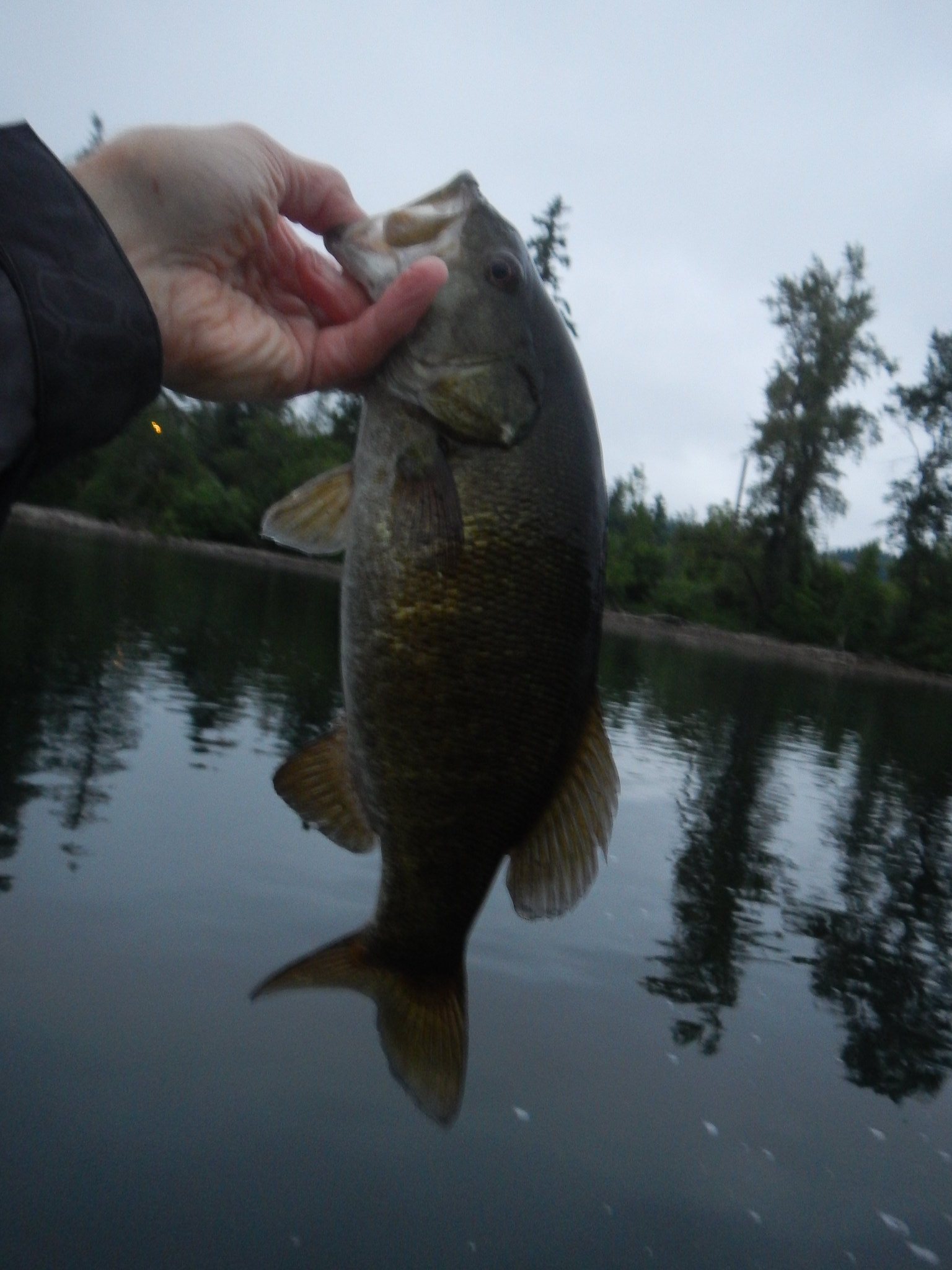 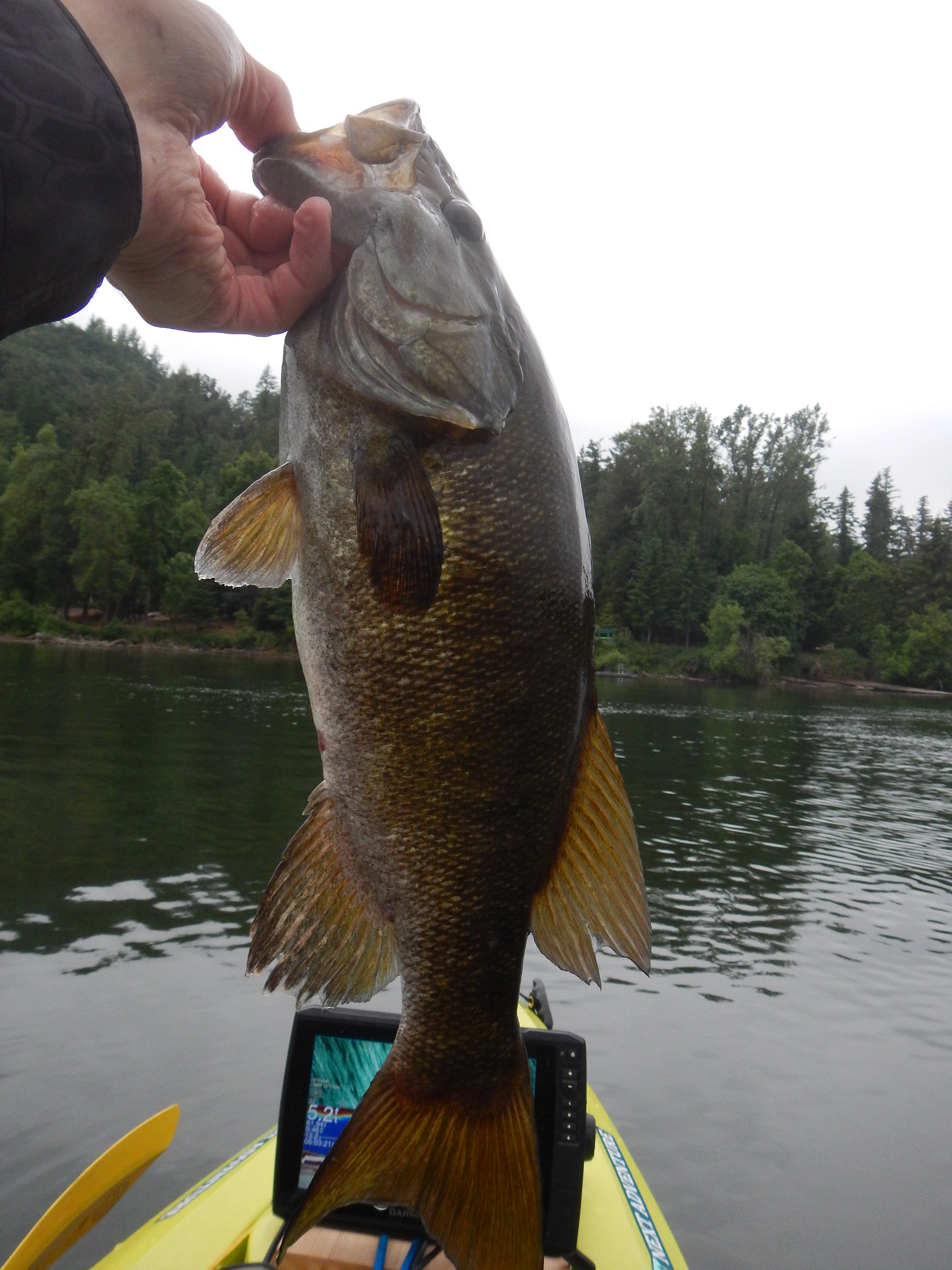 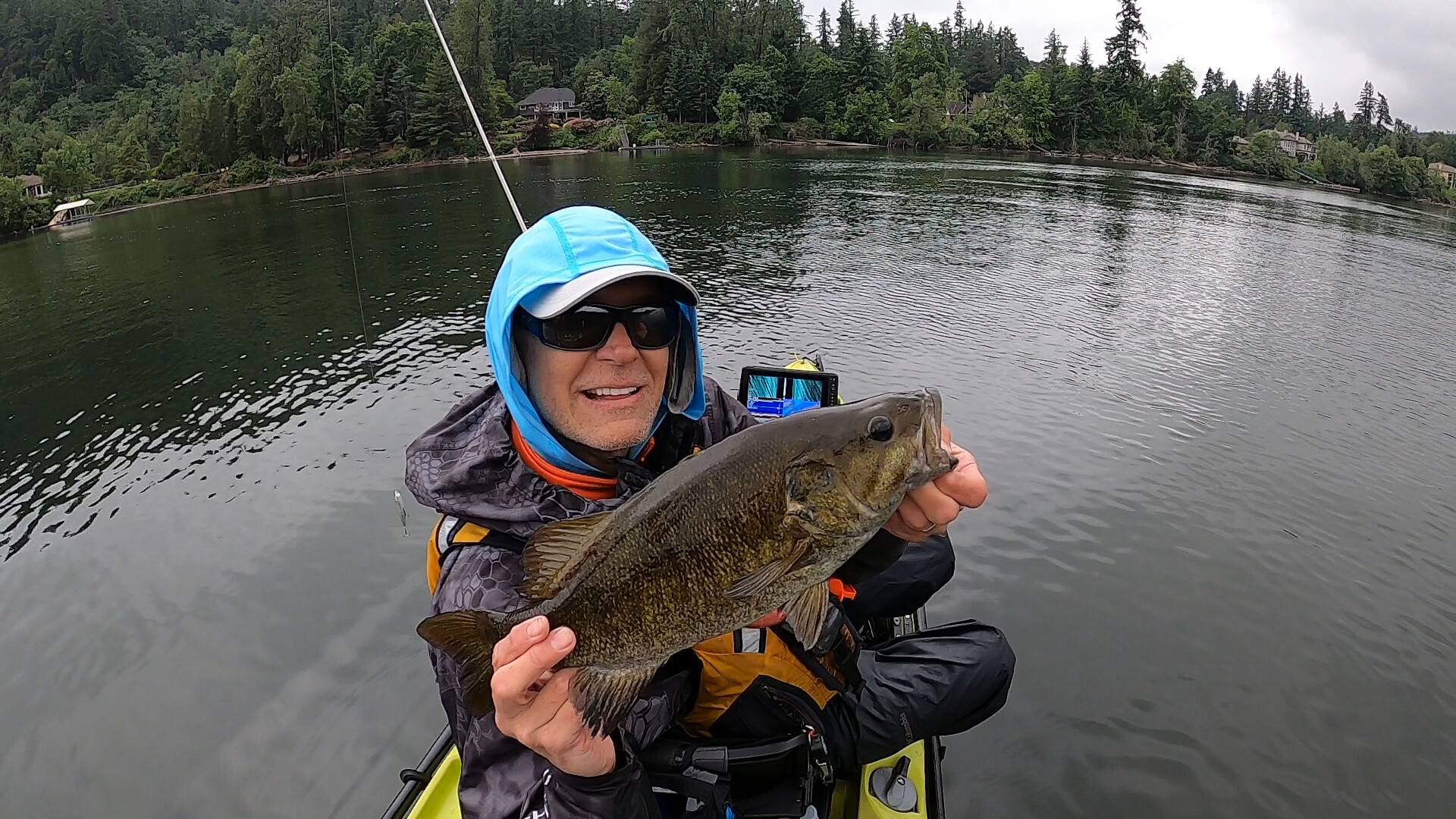 You can see the double I had on right before I lost one of them: 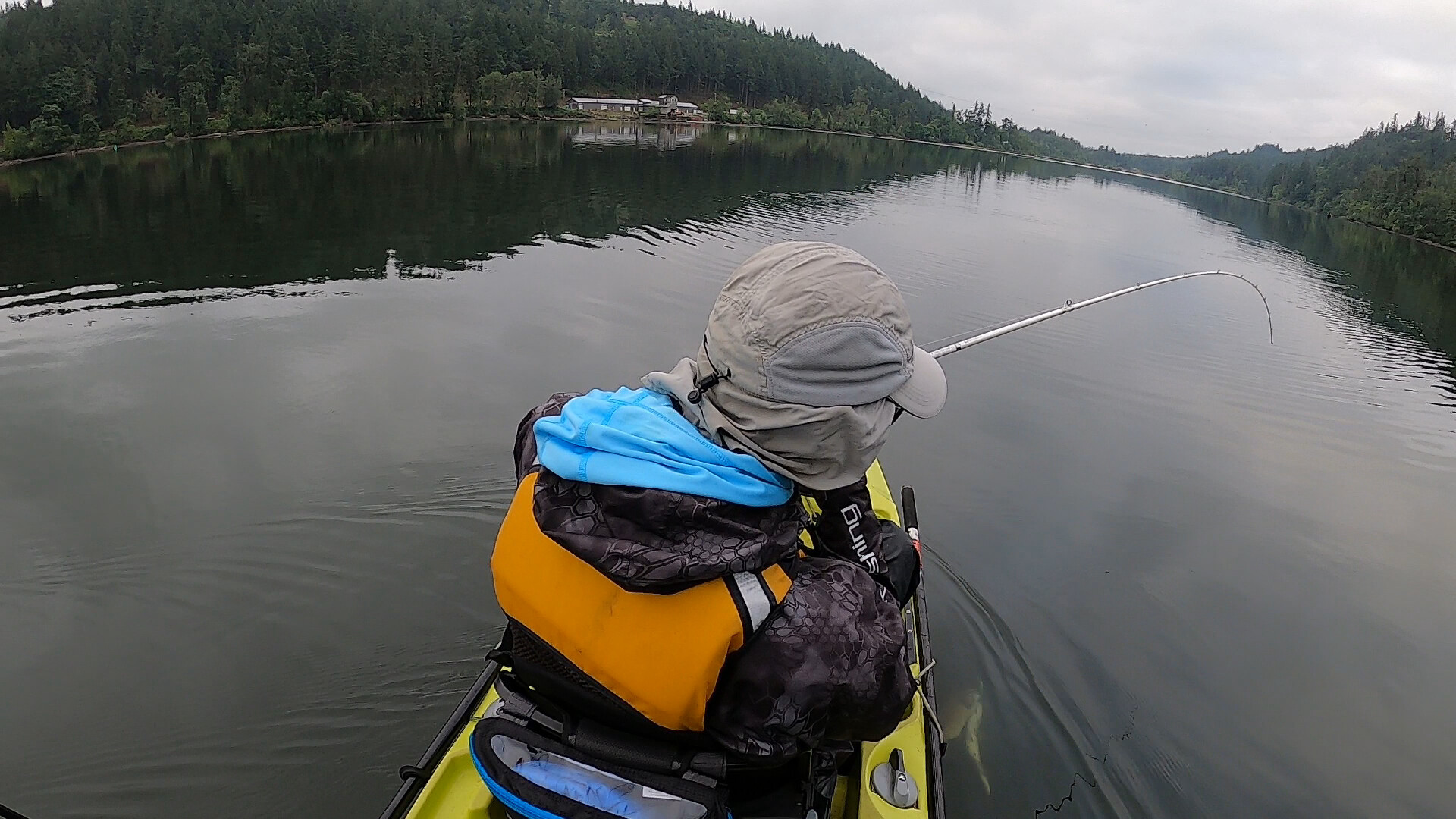 Here is a jumper near the end of the day: 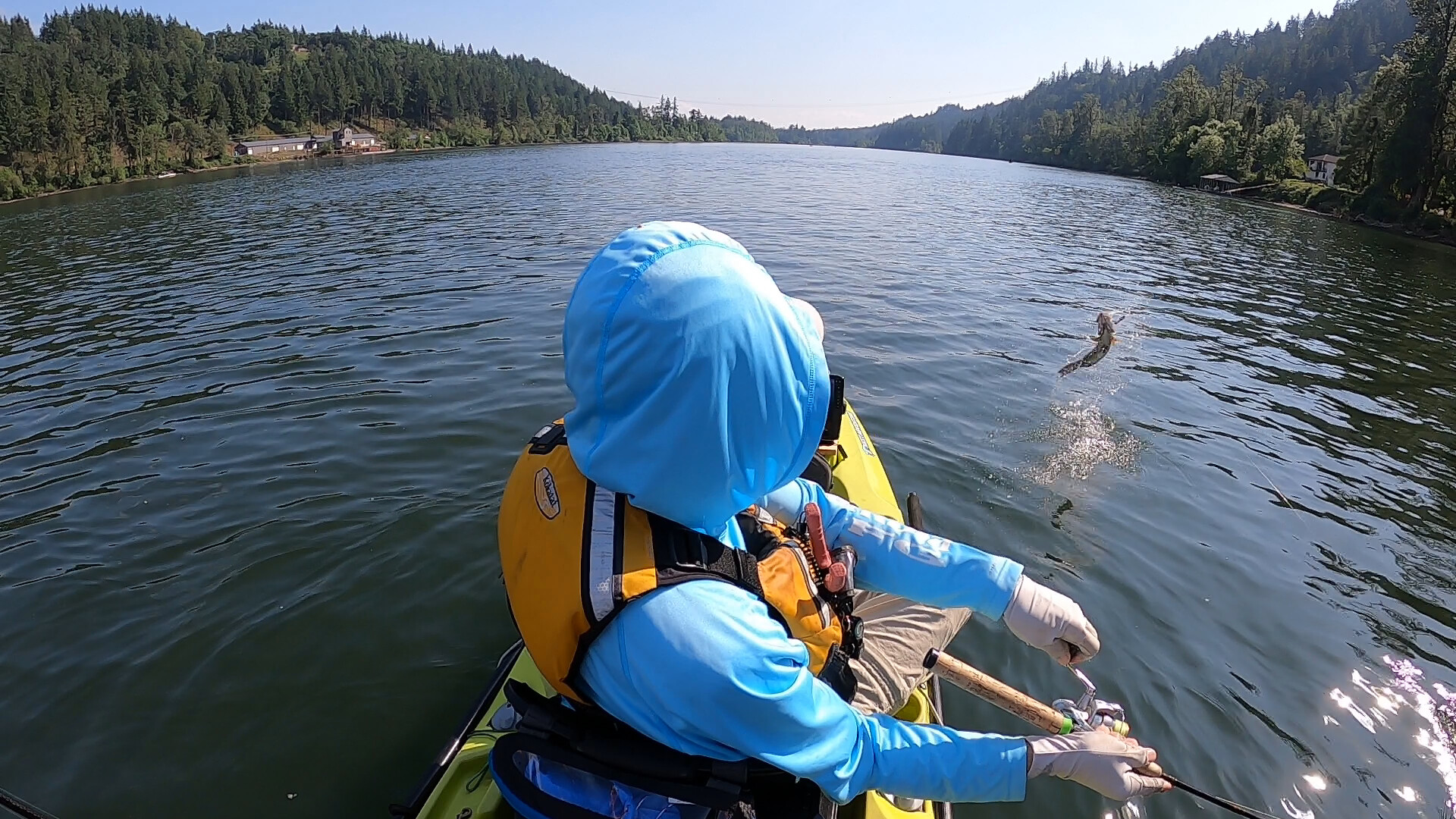 Here is some video from the day. On it you can see that it was not all rainbows and unicorns. Plenty of missed bites and I lost a really big fish.

bass
Thanks @Gulfstream ! I have been really lucky this spring with finding bass that are agreeable

Did I see 5' on the depth finder? How often are you that shallow?

The mid-river bar tops out anywhere from about 4' to 9'. On cloudy days there are wolf packs of smallmouth on top of it all day long. Some sunny, windy days they are on top of it as well. Other times they are in the deeper water on the edges or in the cuts through the bar. Those times the fish drop into 15-30' of water and it is a Ned rig and dropshot deal.

It is interesting to point out that at some point in June or July they put in flash boards along the Falls creating an effective 3' high dam. That changes the nature of that section dramatically. The current becomes almost nonexistent and the river depth jumps about 3'. I am always amazed that the 3' jump in depth and reduction in current is evident through Newberg and that is 23 miles upstream. I am not sure how farther upstream you have to go before that effect is not noticeable.
You must log in or register to reply here.