The apocalypse is nigh...

and most telling of all, I caught an upper Willamette sturgeon. Sorry for damning you all to fire and brimstone, but here is the story for you to read while you wait for the end to begin.

For years I have repeatedly tried to catch an upper river sturgeon. Trip after trip with nothing buy the stench of pikieminnows and bullhead reeking from my kayak. Thus, one might think I went resignedly to fish on Sunday, but given the recent events I knew it was my time.

I got to Newberg right around daybreak, intent on giving it my best effort all day long. I chatted with a fellow named Corky at the ramp who had just acquired a new to him boat and was out to run it but not go fishing.

I launched and headed upstream towards Ash Island. I took my time zigzagging back and forth to map out some of the river. (Love the quickdraw feature on the Garmin!). Eventually I ended up a a bit below Ash Island and I was marking quite a few fish. I knew they were likely pikieminnows, but I was hoping that there was at least one sturgeon in the mix.

The first spot I anchored at was apparently pikieminnow central. After going through 4 baits (landing one pikieminnow in the process) I decided to pull anchor and move upstream a ways. Even though I was not any closer to my goal I did appreciate how calm and serene the upper river is this time of the year.

I moved a short distance upstream and was able to anchor on the edge of a break where the bottom dropped from 30' to 34'. I was hoping that a sturgeon would think that this was a nice spot to wait for a meal.

After catching a couple of pikieminnow I was thinking of moving on when the fellow Corky came back downriver and stopped to chat for a moment. He said he had run about 10 miles upstream and seen only one other boat. Just as he pulled away I felt a bite that seemed really familiar. Pikieminnows bite with a sharp rap and drop feel. This had that chomping without dropping feel of a sturgeon.

I tightened the line to set the circle hook and all hell broke loose (appropriate given the pending apocalypse). 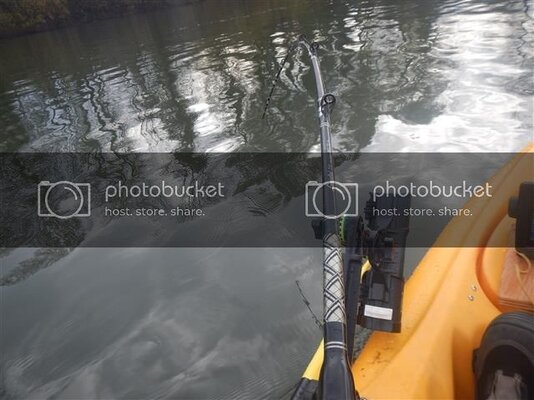 I have never had a fish take off that fast before. The drag screamed as I reached down to tug the quick release from my anchor and in the few seconds it took me to get free that sturgeon had raced so far downstream that my line was almost horizontal to the water! I even got a burn on the back of my hand where the line had touched me. I furiously pedaled to try to stop losing line and when I had matched sppeds with that fish I clamped my thumb down on the spool to begin the sleigh ride.

That only seemed to anger the fish and I felt like I was about to go up on plane. My depthfinder showed my speed to be 4.5mph. Now this was current assisted, but I have never had a sturgeon pull me anywhere near that fast. That first run took me most of the way back to the ramp.

I begin to pump and pull myself closer to the fish bit by bit. I had gotten the line angle down to about 45 degrees when the line when slack. I had a few choice words to say as I reeled up the slack. However, as I reeled I saw that the line was now moving upstream just before it snapped taught.

The fish had not come off, but just decided to go back upstream. When the line did come taut I was jerked so hard that it almost tipped my over. The fish now decided to race upstream and pulled me against the current at 1.8mph. Just a crazy strong fish.

Eventually the second long run ended and the slugfest began. I constantly adjusted my rudder and pedaled as needed to keep my right over top of that fish. I few years back I fought a monster sturgeon that looked to be close to 12' long for 2.5 hours only to have it hang me up and break me off.

I was really tense and kept an eye on my depthfinder cursing each time a log or stump came on the screen. It was the tensest battle I have ever had. However, after nearly 1/2 an hour of blistering runs and pure bulldogging I started to gain some ground.

Once I was able to start to move the fish off the bottom I was surrounded by a massive stream of bubbles and for the first time I felt like I was going to win this fight. The fish made a few more surges to the bottom but I kept on top of it and eventually was able to bring it to hand.

I could not get a good picture of it to really show off its size: 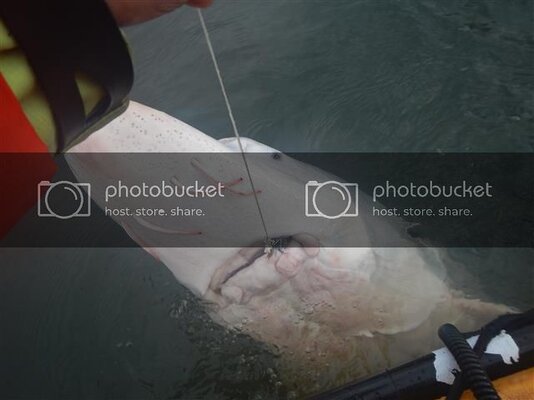 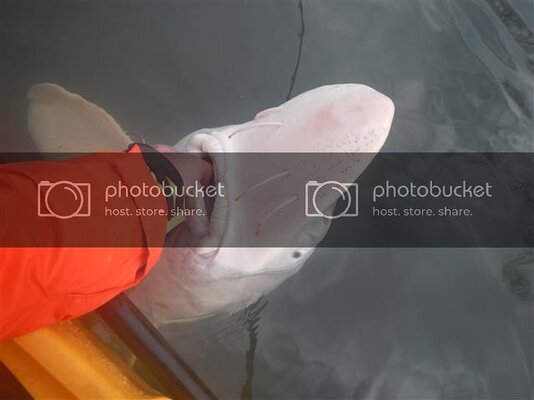 I got it alongside for just a second and marked its length along my kayak. I thought it was a 7' fish, but when I went back and measured the mark it was 6' 10". 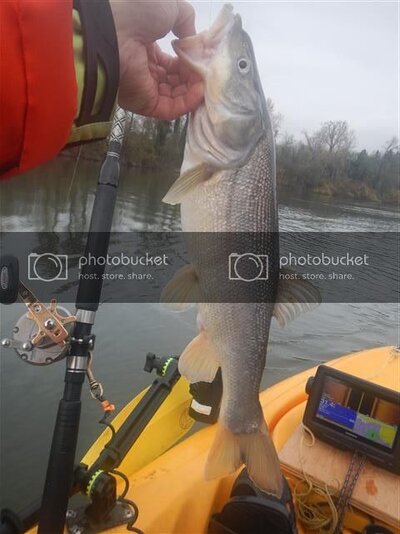 Even though it was just a one sturgeon day I was as happy as I could be. I love the peace and isolation of the upper river and to finally break the ice in such a bit way was just more thrilling than I had imagined in my wildest dreams.

Fishnbuck
Great story bass, entertaining as always! :thumb:
B
billfisher
Another great wright-up Bass! Thanks for taking us along. What a ride!

EOBOY
Whew!!!!!!
H
Hookset
Fantastic story. Thank you for sharing
T
TimberTodd
It read like I was in the yak with you bass. Congrats on the upper river fish!!
C
cdumitru78
Thats an awesome fish, nicely done!

Troutski
Outstanding read, very nice fish.... Thanks so much for sharing..

bass
Thanks guys. That was such a thrill!

Also, I want to thank all the folks on here who sent me advice on the upper river and give an extra shout out to troutmasta who really went above and beyond in terms of his advice and encouragement.
You must log in or register to reply here.