SNOW! The other white flake.

A
ArcticAmoeba
Yeah Dan, what is that hairy, little snow knob???

Raincatcher
My eyes are burning!!!

My eyes are burning!!!

Sheeesh, I'm not even sure I want to know what that is. If I had to venture a guess, I would have to say...Cousin It stuck in a snowbank after burshing his hair to build up static electricity? :think: My first thought was one very hairy body part...blegh! Nightmare images...:shock: :lol:
Barb
F
Fishtopher

Raincatcher said:
Sheeesh, I'm not even sure I want to know what that is. If I had to venture a guess, I would have to say...Cousin It stuck in a snowbank after burshing his hair to build up static electricity? :think: My first thought was one very hairy body part...blegh! Nightmare images...:shock: :lol:
Barb
Click to expand...

Glad I'm not alone in the "first thought" category!:shock::naughty:
F
FishFinger
Why it's a....... Hermicallis.

A clump of blue oat grass encased in snow. My odd eye thought it was an interesting sight. I watched it build and build over the course of the day and when the sun set the illumination from the accent path light created a vision I had to share even if no one knew just what the hell it was.
F
Fishtopher
Be on alert for these little "it's".

Be on alert for these little "it's".


I thought I found "It's" long lost cousin this morning, also frozen solid, but many miles N.E. of his counterpart.

I felt so bad for the little guy, so I tried to help him inside to warm up, and the little sucker bit me:shock:! Be carefull! Although these little things appear to be in need of assistance, they sure are angry little critters!
Last edited: Mar 1, 2009

The picture is of a huge chunk of ice on the powerlines here. That would be a big headache if it hit you on the noggin.

Everything is frozen solid with 1/4 to 1 inch of frozen rain on everything. Took 20 minutes of heating up the van just to get the ice to come of at all. Then it came off in sheets. Got sore toes from not being fast enough.

Not going fishing for a few days. The river access is trecherous according to my uncles. They went down to one of their fav spots and it was a drift of snow over 3 feet high.

Backwashes are freezing over in the higher elevations.

I love it to be honest, just hate knowing that everyone else out here doesn't and can't drive let alone function in it.
Last edited by a moderator: Mar 9, 2018
F
FishFinger
Gravity is going to claim it sooner or later... A headache maker to be sure.

Haven't seen events like this since the 70's. Looks like it's going to melt off slow here, which is good. In like 96 or 97 we had a cold high pressure from central Canada collide with a warm low, like this one, but the first low was followed by the true pine apple express and all the snow melted in a day. The rivers went flood stage quickly and Pres Clinton came and admired the handy work of the city; for the boards they put up against the sea wall downtown.

It was hilarious, the walls ended at the "park" and would have spilled over at the ends... A engineering stroke of genius. The willamette lapped inches from the top of the seawall and the flood was averted... LOL

I did my civic duty and filled sandbags for the folks along the banks of canals that feed Lake Oswego. The Taulatin went big and brown really fast, caught most people off guard.

Kinda put off the fishing for a while too, every draiinage around jumped its banks.

FishFinger;
Hey, do you remember if that was the year that house chased the reporter downhill in the mudslide? I'm thinking that was the same year of the "Save Our Seawall" hillarity. Don't forget the ingenious idea to put plastic on the river side of the plywood to keep ALL the water out. Gotta wonder what position that engineering team has now. If I remember correctly, that was the same year the house in the gorge slid down the hill and the owners were denied all assistance from insurance. I never did hear how they made out. Hope they have had the last laugh somehow. That would be great!
Barb
F
Fishtopher
I remember that well...filling sandbags for folks when Johnson Creek spilled over and covered half of SE Portland...I watched a big dumpster get swept away into the creek while the water was just overtaking the overpass.

I dont know why, but I just tried to turn that into an algebra problem. Sorry.
A
A_J-Llama
Frozen Willamette

I just got an email sent by my uncle of the Willamette river on Christmas in 1924, frozen solid, but I can't get it to post. I would be willing to email it to one of you if you think you could got it posted on our forum. We've got 10" here in Newberg and pretty much snow-bound with no tire chains. Walked the 2 miles into town yesterday for some supplies, couldn't believe how many 4x4 trucks with chains on drove right on by without offering a ride, let alone slow down. Hope you are all staying safe and warm. White Christmas, bah humbug, we should all be with FishSchooler in Hawaii bigdog, hope you can get your rig home safe and soundray: glad your family got home safe too. Merry Christmas Everyone !!!
Last edited: Dec 21, 2008
F
FishFinger
I see flooded people

My guts (which are fairly wise, and no it's not just gas) tell me there is going to be hell to pay when this mess melts off. Forcasts are calling for warming to traditional temps and rain by this weekend. With as much snow as we have sitting around river levels are going to go nuts when it melts.....

Raincatcher
This could get ugly

This could get ugly

Who's dreamin of a white Christmas now? I think you are totally right about the havoc this snow is going to cause when it begins to melt,FishFinger. I hope if any of our members live close to any body of water,you will carefully assess the whole geographic thing-a-ma-whattsit and decide if you should stay. It is going to get ugly in a lot of places. Who knows, Mill Creek here in Salem could become a raging river next week. Get ready,mentally at least.
Barb
F
Fishtopher
I agree with the above said. They are saying that we havent had this much snow since 1980, the year I was born.
Heck, my front yard looks like Timberline!
Looks like Ill be workin' those sandbags again. Half my neighborhood is a Johnson Creek flood plain. On the bright side, the flows get high, and those steelies are gonna swimmin right by my feet at Meldrum:lol:...
H
Hawk
Fer over 4 lustrums now we live way out heer on the side of the mountain. I always layup a lot of extra vittles (grub) before the snow flies in case we git snowed in. xtra fuel fer the atv's, chain saws,etc too.......................................................................

Irishrover
Oh yes this is the same set up for the 1964 and 1996 flood. I've lived out here east of Sandy for 22 years and this is he most one time snow dump we have seen along with the longest strech of low temps.

Fishtopher I grew up down in your neighborhood and recognized the picture of that park. Johnson creek has alway been a real pain for flooding. In 1964it was all the way up to 103rd and Harold on the south side.

Believe it or not we used to fish Johnson Creek. The ODFW used to stock it with legal size trout. We would fish down by 82nd toward the old Bell Station at 72nd. The Spring water trail used to be a trolly car line into Portland and out to Boring. We would walk the tracts to get to our fishing holes. Catching crawdads was a kick. We would tie a piece of old bacon an a string when a crawdad would start eatening the bacon you would slowly pull the string and grab the crawdad. Ok enough history for today. Hope you all stay high and dry.
F
Fishtopher
Johnson Creek is a sad story! If a guy does some google'n on the creek, you could find stories of huge salmon and steelhead runs, and all the deer, elk, and various other wildlife. And then the area was over run by residential and industrial zones, streets, portions of the creek were made impassable to returning fish runs, portions of the whole creek moved because some goofball thought it was a good idea. The State I think just fixed that overpass on like 148th and Foster, for 20+ years at that spot it was impossible for fish to get upstream. It took so long for them to get that done because once they were almost finished, some other government agency decided to take a peek at the work, and told them that the work they did had to be re-done as they had not complied with some Salmon protection Act. Ill dig around and post the link to the story if anyone is interested. Heck I might do it anyway to GET yall interested...:lol:

Some folks would be AMAZED at how many creeks have been covered up in the metro area in the past and forgetten about. I think it's Crystal Springs that Reed College students have been working on the past few years. They actually have Salmon returning upstream again, after many many years of mis-use and destruction!

Irishrover, my family lived on top of Bell Hill for generations! I too used to hunt the creek for craws. And remember there being many fish in the creek, but I knew nothing then as to the difference between a Trout, and a Salmon. I used to watch them in the pool below the lower fish ladder though.

Back on track, the temperature this weekend looks like its gonna be in the high 40's with rain!? And as of right now, I have snow drifts that are 3 1/2 feet deep. Gonna have to get the raft inflated.
Last edited: Dec 22, 2008
F
FishFinger
the continued freezing of cousin it

the continued freezing of cousin it 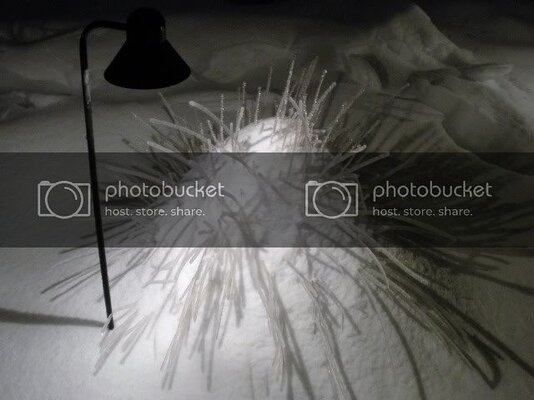 Geez, I feel like it's "old home week". I grew up in S.E. Portland also. My best friend in high school lived in a house right on Foster Rd. across the street from where Light Truck Parts is now. Every year the water in Johnson Creek would rise a bit they would get flooded out. Would you believe my sister and her husband moved into the same house 25 years later? Yep, got flooded out and made the news too. Some things never change. I went to David Douglas 1964-1966,then moved over to Marshall High area. Nice little trip down memory lane. :think:
Barb
Last edited: Dec 22, 2008

Irishrover
Raincatcher. Ummmmmmm I think we may have gone to Marshall at the same time. Kind of a flood of memories:lol:
You must log in or register to reply here.
Fishing by Species