My first limit ever.

R
rippin fish lips
So this is a late report... sorry its so late, i finaly just got the picture uploaded to the computer. I caught these guys last month 10-21-10. we got out on the water at 8 AM.
started off fishing our first hole with nothing but a few hits. So we decided to move down a little to the next hole, My buddy Bill hooks into a nice chromer steelhead, he can't row the boat and fight the fish so he hands it over to my step dad. The fish takes off down stream so we chase it, then it turns and goes back up so we chase it back up and finally get into some calm water, sadly i went to net it and was to impatient and bumped the lure out ot its mouth =/ So we keep fishing that hole for a little longer with nothing else happening after that.

So we slip down to the next hole, first cast and nothing but another hit. Second cast and WHHAAAMM!!! FISH ONN!! this fish just starts screaming line, glad i had new 6 pound test on! It put on a nice acrobatic show before we got it in the net. a nice 27 incher wish some nice eggs that went to chrome chaser. so we keep fishing that hole and a few casts later WHAAAAM!!!! fish AGAIN i say!! this fidh put up about a nice 8 minute fight then we got it into the net, a nice 28 incher with eggs that again went to chrome chaser. So we fish the hole hard for another hour with a few more hook ups that didn't stick.

So on down the river we went. Stopped at the next hole and i was just makin as many casts as i could to cover as much of this riply water as i could.... which... i covered practically all of it. As we were gettin to the end of the hole, i make one more PRO cast about 100 feet up streem start realing in and SMACCKKK!!! 3RD FISH ON!!! a nice 27.5 incher put up one hell of a fight! longest fight of my life... about 15 minutes this fish wasn't dying with out a good fight! had some nice eggs in it that again went to chrome chaser, which i hope those are gettin you some fish chrome chaser!! Now im limited so i can't fish now, so i just relax chill and start rowing the boat in some calm water for some practice while bill and my step dad keep fishing.

So on down we went with bill and stop dad hooking into a few more that spit the lure. I LOVE SUMMER STEELHEADING!!! this was my first very successful year of summer steelhead fishing, put 6 on the tag this year... my goal was to get 5 inked and i beat it! so next summer my goal is 10 or 15 one of those...

OK so ever since they put this up... i was DETERMINED to get my steelhead limit and get of my limit in this.... and it was my chance to do so, so i did. 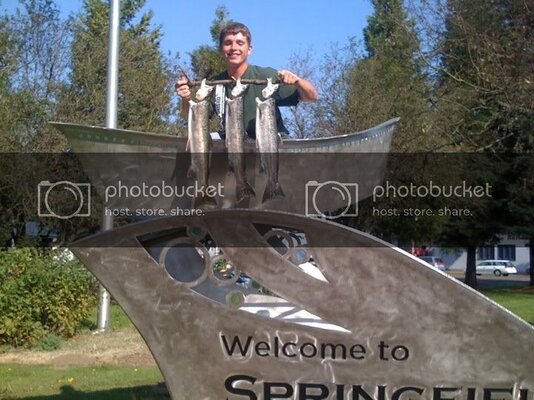 BTW...if you had of cut OFF the bottom of your pic, it woulda looked like you were sittin in a drifter! LOL
R
rippin fish lips

BTW...if you had of cut OFF the bottom of your pic, it woulda looked like you were sittin in a drifter! LOL
Click to expand...


true but i wasn't the one who took the picture lol. i like how they built that thing its cool. so i took a pic in it.

Memory of my favorite fisherman...