Is 3 rivers a navigable river or not?

B
bigcat
Just read the whole speel on odfw's website and im still kinda confused about if the river is deemed navigable or non. A request was submitted 4 years ago to have an official study done and nothing has been done about it? Kayakers and tooners float that section of the river daily during the peak steelhead run, so I guess it would be a navigable river right?. "Game on" come this December!!

brandon4455
i'm not possitive,but i'm pretty sure if you have waders you can walk that river down to it's confluence with the nestucca. it's generally a shallow river.

-brandon
B
beaverfan
There are 13 rivers in Oregon that have had all or some stretches deemed as navigable. Three Rivers is not one of those rivers.
B
bigdog

beaverfan said:
There are 13 rivers in Oregon that have had all or some stretches deemed as navigable. Three Rivers is not one of those rivers.
Click to expand...


13? I thought it was less then that but I could be wrong though.
B
beaverfan
Sorry I mis-spoke, there are only 12. Chetco, Columbia, Coos, Coquille, John Day, Klamath, Mckenzie, Rogue, Sandy, Snake, Umpqua and Willamette.
B
bigdog

it is accepted by the state that if a river has a state or county operated drift or jet boat launch above tidewater that the sections between the launch and the take-out are by default deemed navigatable waters and the high water rule is in play.. but only to the location of the highest put in on that river.
B
beaverfan

halibuthitman said:
it is accepted by the state that if a river has a state or county operated drift or jet boat launch above tidewater that the sections between the launch and the take-out are by default deemed navigatable waters and the high water rule is in play.. but only to the location of the highest put in on that river.
Click to expand...

That's good to know, makes sense.
H
halibuthitman
I beat a ticket on the Necanicum by proving it was a routine float for several drift boats a week ( provided a video of myself ) and it has 2 launches that are published in 3 books and one odf posting..
B
bigdog
That is very good to know, thanks for sharing that with us.

CJ
E
everett464
This is interesting that this should come up, because I recently did some work on a real property dispute where the navigability of the S. Umpqua was in question. The Oregon Department of State Lands does the study, and the studies are done roughly in priority of the order the request come in. The Rogue was the last approval, and the S. Umpqua is due to be done next (there was also a whole lot of bureaucratic stuff that I learned that is somewhat irrelevant, but I found pretty cool anyway).

Anywho, I don't know where a study on 3 rivers stands, or if it has been requested at all, but with 13 years from request to completion, it is not a quick process.

I don't know that this actually adds anything to the conversation, but I thought I'd share the information, as I found it fascinating.
S
Steelheader4Life
It's not considered a navigatable river but you can walk it from the S corners to the mouth if you know what you are doing and you stay on the side that is not private property. Kayakers and tooners do not float it at all (fishing from a floating device is not allowed). You can drift from the mouth of 3 Rivers to Cloverdale on the Nestucca, but you can't drift 3 Rivers itself.
B
Bean
That not right. You can float down 3 Rivers in anything you want. You just can't fish from it. There is nothing illegal about dropping in a raft at Cedar Creek and floating as far as you want.
Last edited: Dec 9, 2010
O
osmosis
here is a list directly from ODFW that they mailed me with my guide registration packet- 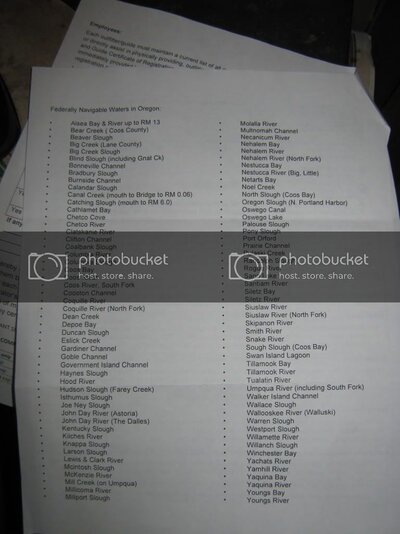 here's a pic of the page ODFW mailed me.
Last edited: Feb 11, 2011
C
capblack
thats my bucket list. but first im gonna go out in the morning and stick an arrow in a big fat cow elk. sorry for getting off topic, but that list made me want to go fishing, Brian
H
halibuthitman
that list is missing a sh*t load of rivers... Just sayin'.......... ( did I use Just sayin right guys?)

so the wilson, sandy, big D, and about 45 other rivers with state boat launches aren't on there... and the necanicum, one I had to fight a ticket all the way into court on.... is? I think that list is about 25 years out of date-
O
osmosis
that's what ODFW mailed this month. Who knows how current it is, but with the nearly 100 that they do list, it sure is a hell of a lot more than 12. I noticed a good number that I fish (that have launches) that aren't on there as well.
Last edited: Dec 11, 2010
H
halibuthitman
its good info, and a nice start, I think the key is the word FEDERAL... many of oregons rivers are probably considered navigatble on a state level...but not a federal level... we could really get all lawyered up on this one- Thanks for the list
You must log in or register to reply here.