First winter of the season

Y
youngbuck307
So got to hit the clack with Alan aka osmo in hope of some good old
thanksgiving weekend steel. Water was perfect just a
great steelhead green.

First fish came to me. We were bobber dogging a nice slot. We picked up a few smolts and had a few missed bobber downs Alan was running eggs me a pink jig. After talk of moving thought we give it just a lil longer. I drop my bobber over the side let it slide back. Right befor I click my bail to reel in it goes shooting under! I know a rock won't pull a float down like that. Reel reel reel set the hook in one motion. FISH ON. It comes right up and starts splashing around for us and all u see are bright flashes. After a few good runs I start to gain some ground. Alan grabs the net and the fish starts to
death roll. Normaly a steel won't do this kind of thing. Then we see a high fin then wait. that's not steel that's a hoe. From what I been told only about 600 of the late hoes come in every year and go way up to the north fork to spawn. 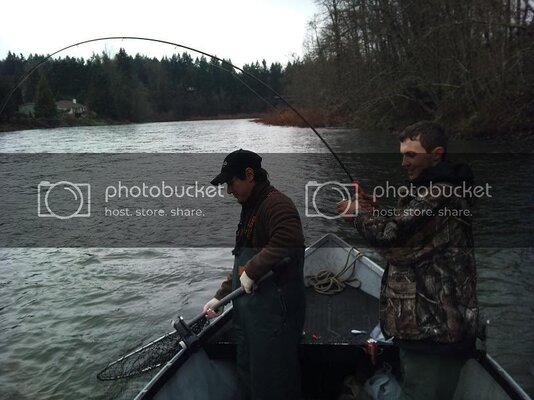 shifted over to the other side of the rive to side drift down... Me Alan and are buddy cast out... Alan gets a fish on but can't row and do everything so are buddy picks up the rod and lands a nice winter hen. We were side drifting multi color yarn balls made with steelhead stalkers year.

We went the whole rest of the float with nothing beside some
missed bits... We talked and cents it was only one we decided to do the whole float agen just side drift it the whole way. We get to the same
spot we hooked the first winter. We all cast out and start the drift. Alan get a nice tap we look at each other with big grins... Then my rod load up just a lil I think about it for some reason an don't load my rod up rest of the way to set the hook... Alan's watching the whole thing. Right as he opens his mouth to say set it I do just that. Zip zip zip goes the spinning reel fish on..... Zzzzzzz zzzzz zzzzzzz drag to loss few clicks good... Fish is up stream of us so fight it back down... Make sure not to get close to ancore rope. Then she trys to go down and were in some good flow of water so put the breaks
on her real quick. Rod tip back up stream crank down pal spool just a lil and tund the head... Good now net time Alan goes for It lift rod tip over his head... Her head in net and half her body. All I have to do is drop her head and she would be in. Still excited I keep to much preasher on her and she flops out... Runs agen. Back to te boat she comes net down fish in drop rod tip and just like that first winter of the season!!! 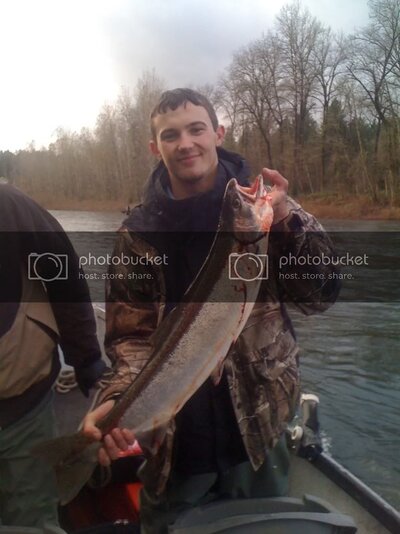 Agen on ss yarn... Going to have to grab some of that stuff now I seen it up close in person. Love the way it feels and. Colors it comes in to. We were useing shades of pinks and peaches.

Thanks agen Alan was a blast. Anytime u need company on a weekend agen let me know brother... Also I feel like I could do pretty dang good on that river after a few floats down it with u... Maybe I'll give them sandy fish a break on weekends.
Last edited: Nov 28, 2010
S
schroegp
jealous, way to go.

brandon4455
great fish nice and chrome!
K
Kais
Nice
B
BobbiDollPDX
Wow Tom, I'm getting pretty excited. I had reached out to Osmosis last week about scheduling some time on the Clack and now I'm gonna have that yarn too. I hope things go as well for me.

Great story and awesome fish!
T
Throbbit _Shane
Nice fish!
Y
youngbuck307
Yea nice to get some winter chrome back in my hands think winter steel is my favorite of them all. Something about winter just drive me crazy! Can't put my finger on just what it is about them though
W
waco
nice fish congratulations!!!!
F
fishingfreak
Nice Job! thats a beauty!
Y
youngbuck307

BobbiDollPDX said:
Wow Tom, I'm getting pretty excited. I had reached out to Osmosis last week about scheduling some time on the Clack and now I'm gonna have that yarn too. I hope things go as well for me.


I'm sure it will guy knows the clack like no other if it's high enough for the sled and fish are in the system he will find them!!!! U guys doing float or sled trip?
S
steelhead_stalkers
Nice fish! I am jealous, its time to get a winter steelhead for myself! Glad the yarn did the trick, I heard that the one fish almost swallowed the yarn ball unscented! Thats pretty cool.

steelhead_stalkers said:
Nice fish! I am jealous, its time to get a winter steelhead for myself! Glad the yarn did the trick, I heard that the one fish almost swallowed the yarn ball unscented! Thats pretty cool.
Click to expand...


jeez...they just love the yarn don't they? thats some crazy stuff..it just keeps gettin better and better:clap:
S
steelhead_stalkers
90% presentation and the guide getting them on the fish. The yarn did not hurt though. :lol:
Y
youngbuck307
Yea I had small chunk of eggs. But the one that came on uv was hooked way deep could barly see it!!!! And Chad that yarn helped a lot in 2 passes 2 fish the sled that hit the spot after us didn't pick up any fish all day and they could hit it as much as they wanted to! This yarn is a must have!!!!
M
mgdguy
A perfect hatchery winter steel. Nice! :clap:
B
bigsteel
great job bro,,,maybe we can do a coastal run real soon
E
eggs
sounds like a solid day tom... you sent me those pics on your phone and it made me smile for the first time that day!! lets go spill blood!
O
osmosis
Always fun fishin with ya Tom!
He's become pretty dang good over the last couple years that's for sure!
Who doesn't love sidedrifting though!?
M
metalfisher76
Noyce!!

kirkster
Tom your as cute as a bugs ear. Your pics show it all. Looks like a little boy who's into mischief. And didn't get caught. Lol. .. awesome fish bro
You must log in or register to reply here.