E
eggs
BigSteel and I went to a little river to fish for some trout and try out some new patterns.. 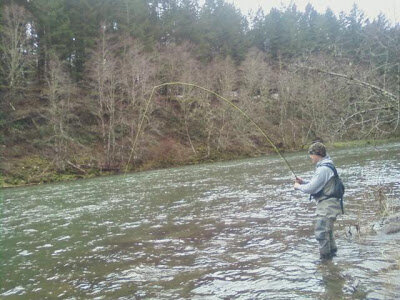 How about that whitefish??? 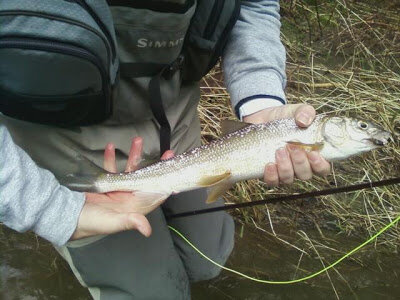 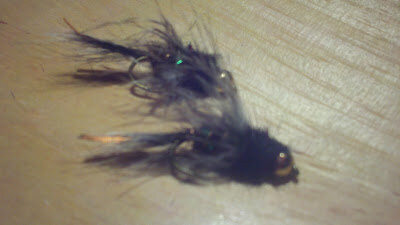 No hatch but they were hungry!
Last edited: Mar 5, 2011
M
mlw
nice, everything around here is high.
Michael
S
skunk
Good job, my son and I struck out today.
B
bigsteel
that was a fun day man,,especially getting stuck in the snow,,,it was great,,that is a hell of a whitefish.
R
RunWithSasquatch
I dont know much about whitefish around where I am, but I seen some guys were curing up there eggs earlier this winter on Ifish, and they looked pretty good.
L
lilsalmon
nice job.....water is pretty high of course...I love that place. Jealous too.........
H
halibuthitman
....:think:

brandon4455
noice!
M
mgman6000
Where can you find a little river that is legal to fish for trout this time of year? That's the kind of place I like to fish but I thought all the smaller ones were closed to trout fishing this time of year.All I can see is 100 miles south to the McKenzie or over to the Deschutes another 100 miles away.
E
eggs
Yea it was a good hour and a half drive each way for sure
M
mgman6000
Is it some kind of secret? I thought a forum was to share and help other people but mostly I see a clique here that are all insiders that have been living here for years and have been shown the spots by either friends or family GEEZE I just want to find a stretch of river I can do a little trout fishing on that isn't a big ass river!! I look at the little crappy maps in the guide and then try to put them with google and try to make sense out of the regs which change 5 times on the same river and if I ask I get some jerk giving me a hard time. I really thought Oregonians were going to be nicer people
H
halibuthitman
mgman6000, How do we even know where you want to fish, when you have no info on your profile page, it doesn't say where you live on your avatar.. nothing.. But If you want I can tell you dozens of places you can catch dozens of sqauw fish in a small river.. and basicly any body of water with a rock that breaks the surface in a ripple...is full of some kind of fish.. and as for the comment about mean oregonians... well were all in the same boat here, after all we all thought the invading californians would be much nicer... so I guess that **** just goes around.. if you want some trout spots p.m me where you live- Brad
T
Throbbit _Shane
im a 6th or 7th generation Oregonian and have no problem sharing my spots. except for bass ponds

If your ever in the southern part of the state, fish the applegate river. if trout is in season on it.
E
eggs
I will tell where I fish 99% of the time in my posts or if asked.. but there are a few gems that are word of mouth and when told to keep a place a secert I won't break that word.
G
GungasUncle
Try the upper reaches of the deschutes, above the impounded water. Smaller river, gorgeous country. It is a drive though.

You can also head much further east - most streams on the high desert side of the cascades are open year round. You're not going to find a lot of folks giving away their small water haunts very easily - simply put - those waters can't stand a lot of pressure. The instant you post something on the internet - it's not just a few people accessing it - it's out there for everyone. Sites like OFF, and iFish are a blessing and a curse for our fisheries, and fisherman. They let us spread news about political actions, ecological disasters, they let us share techniques and gear reviews... but at the same time, it only takes one person sharing a "hot bite!" story to ruin what had been a low key fishery. Sharing info on big waters like the Deschutes, the Columbia, the Willamette, the McKenzie, Wilson, etc is one thing. Sharing info about your neighborhood creek is another. There's some waters I fish that make me wish I had a Star Trek like cloaking device - because I'm sure people have seen me fishing, and catching fish - in places and then come back and pounded the same water.

I hate to say it, but sometimes you just have to get out and LOOK for yourself to find some of these places. I'm sure you did the same thing when you were in California, and you probably don't want to share all your high sierra honey holes with thousands of other fishermen.

There are streams I fish that I know get some pressure - but it's probably maybe one or two anglers a week, or a handful more. If I post up on here even a stream name, or a spot on said stream - there's always that possibility that the bite chasers are going to flock there, and you can go from a very small number of fisherman, to a hundred guys a week pounding that water. I've already witnessed an increase in stream side trash in some of these places, because other people have mentioned stream names on the internet. I admit - I'll make up a name, or flat out lie and say it was another stream sometimes just to throw the bite chasers off. Sometimes I just keep my mouth shut, even though we all have that urge to share and get attention for catching some nice fish.

I will say this - if you're from the Portland area, and you like catching fish on smallish water - wait until the end of may, then drive up Hwy 224 and follow the river above the lakes, and fish the upper reach of the Clackamas. There's rainbows, cutthroat, and a few brookies up there. It's a smaller water body - with stretches that look like the OP's picture. There's good camping up there too, and it's public enough that people aren't going to get uptight about one more person fishing it.

If you're located closer to Salem - fish the North and South Santiam rivers. Excellent trouting, beautiful scenery, not really big water. Again, it opens at the end of May.

If you are willing to drive - head over the mountains and try the Metolius, or the Crooked rivers.

Can't just have everything laid out on your plate for free.
M
mgman6000
I had some nice PMs with some info,thanks to those I live in Oregon City near Molino I just would like to do some stream fishing for trout
That's all but I have a hell of a time understanding the way the reg book is laid out,on one hand if you look at the map it shows a shaded area that says stream fishing opens in May but then if you track down different tributaries it says some are open all year some aren't you really have to dig I don't want a specific site just a way to figure out what is what there are landmarks mentioned that I have no idea where they are. Last year after May I went over to the upper Deschutes I have been to Brietenbrush,Quartzville Santiam I don't have a problem after season opens but I sure would like to get out before May. I have heard of an Alder creek but can't seem to find it in the book Are there any guide books out there that anyone suggests? I used to darw maps for people showing them some of the spots I fished on Bishop Creek I didn,t care but I understand not wanting to blab it all over the net I just guess I'm stupid having this much trouble reading the reg book.
G
GungasUncle
I would go down to your local library and find a copy of the book "Fishing in Oregon" - it's got some better maps in it, and breaks down many of the better widely known fishing locales, along with productive techniques/lures for a given body of water.

Regulations west of the Cascade summit are a lot more complex than those in the eastern part of the state - a lot of it is due to the salmon/steelhead spawning periods. Those little ditches called creeks in many areas actually do host the big fish. There are three streams I know of in the Beaverton area that, for most of their run, never get wider than 10 feet, and they see steelhead every winter. Same with some trickles near your neck of the woods. Many of the coastal trickles like that are closed year round for protection of the big fish. They'd be great trout waters, as they also host cutties, but them's the breaks.

Quartzville is a wonderful place to fish.

As a general rule state wide - ponds and lakes are open year round, unless there's a special reg limiting their season. There's lots of nice still water trout fishing in the lakes on Mt. Hood that fall under general regs (in other words, open year round).
B
bigsteel

mgman6000 said:
Is it some kind of secret? I thought a forum was to share and help other people but mostly I see a clique here that are all insiders that have been living here for years and have been shown the spots by either friends or family GEEZE I just want to find a stretch of river I can do a little trout fishing on that isn't a big ass river!! I look at the little crappy maps in the guide and then try to put them with google and try to make sense out of the regs which change 5 times on the same river and if I ask I get some jerk giving me a hard time. I really thought Oregonians were going to be nicer people
Click to expand...


whats wrong with having friends and showing them your favorite spots??why is it a guy has to post his exact location in a report?Clique,are u serious there is a group of us that fly fish and we share our spots with each other,i learned most my fishing spots by getting out and hiking around and fishing every bit of water there is....its posts like these that make the forum suck,,,,someone shares there day and you come along and **** and moan because they wont tell u what river they were on.this is the 2nd thread you have hijacked complaining about fishing spots and regulations.either get out and fish or just give it up,crying on a fishing forum doesn't gain sympathy from anyone...........tell u what this spring get a hold of me and i will take you to some great trout fishing spots....
M
metalfisher76
Wow! This one took a poop!

Noice feesh there fellas!
B
bigsteel

metalfisher76 said:
Wow! This one took a poop!


yes yes it did,,,thanks damon
You must log in or register to reply here.