Columbia with Youngbuck307, The curse is broken!!

O
osmosis
Hit the Columbia below bonneville with Tom today, It was DEAD at the normal spot. We spent a couple hours there without a sniff. So we wandered up to the tanner creek fishing area with the plan of plunking that seam to see if anyone wanted to play.
When we arrived we immediately saw that there were fish actively shooting up the creek. We shifted gears and started casting plugs through the creek.

It took about an hour until the first fish was hooked, they were being shy towards the plugs for the most part..
Good news was the first fish was a 20+LB fall chinook! It wooped toms butt for about 15 minutes. Every time he started gaining line it would tear upstream and peel more line than he had gained. He opted to let it go since she had a couple sore spots on her, good decision on his part as the fish gods smiled on him for it. He was shaking with excitement and adrenaline after he had revived and released it. 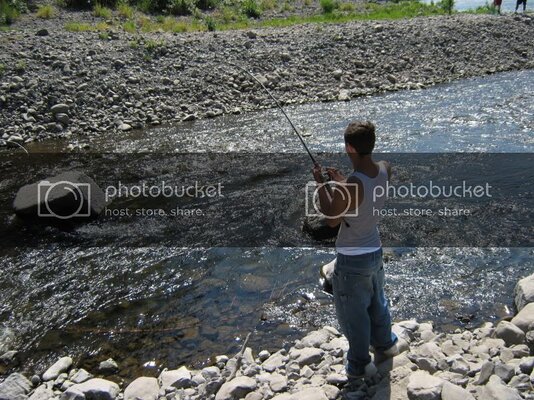 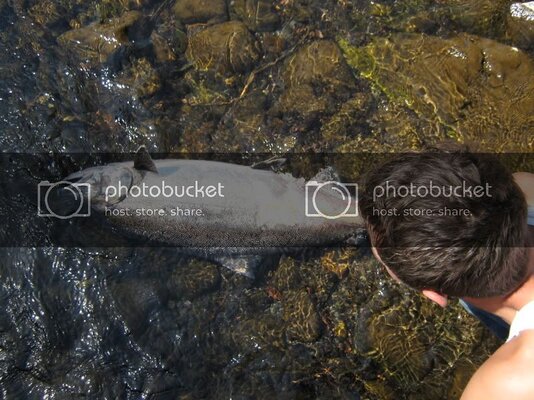 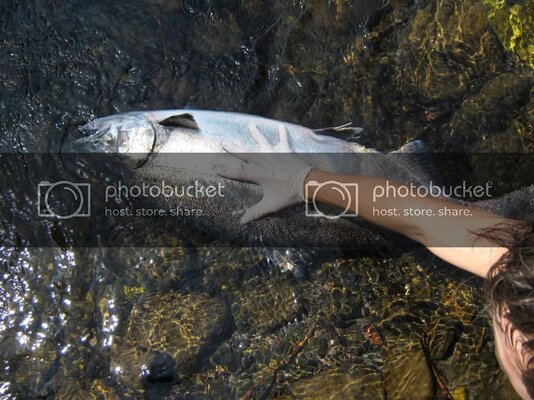 We put on some drift gear and then commenced puttin a hurt on the steelhead. Hooked 10 steelhead and landed 7 between the two of us. Most were wild, but he did get a nice 4lb-ish hatchery steelhead for the BBQ! 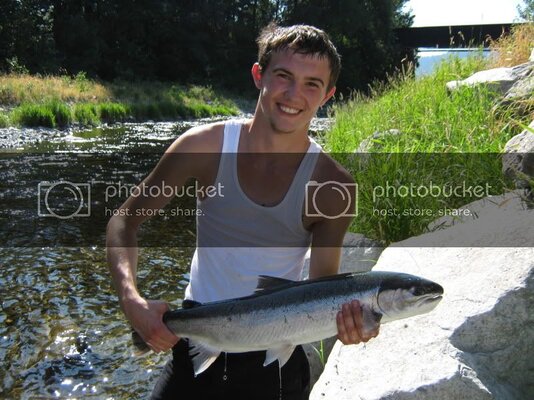 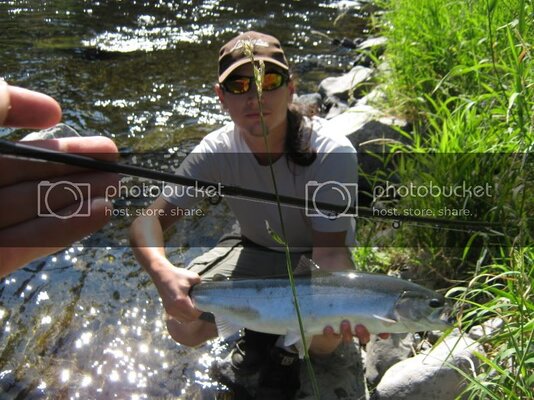 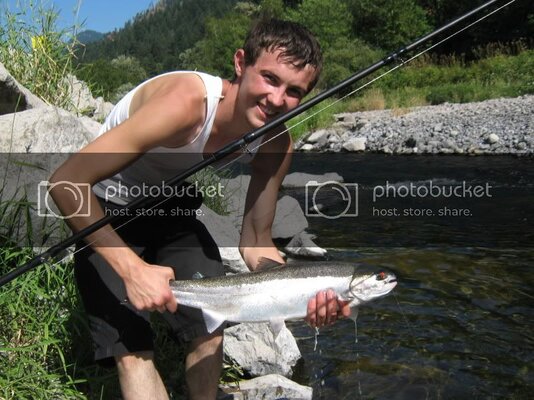 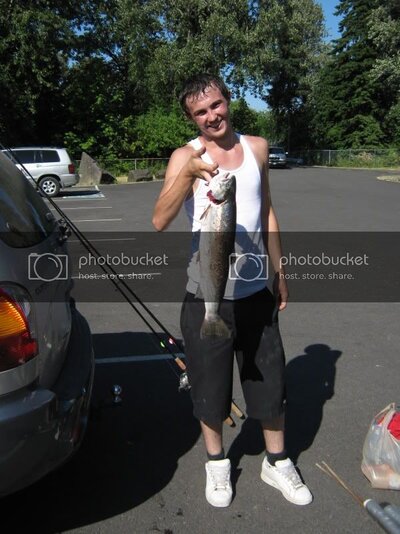 Glad I could help you shed the curse man, We'll have to get out there and do it again soon.

Yahoooo! :dance: Good for you two. Another skunk bites the dust. Looks like you guys hit the steel jackpot. Congratulations. :yay::yay::yay:

Be safe.
Barb
Y
youngbuck307
O yes Im about to go eat ill tell you how it is! ill write a lil more about it when i get home.
N
ninja2010
way to kill that skunk! good job guys. :clap::clap::clap:
B
Bohemian
Wow...Congratulations! :clap::clap::clap:
What a great day! Love the pictures!
F
FishSchooler
wow... the fish were there when you were and when I wasn't! :think:
Good job though, that water is low compared to what it was when I was there. That rock in the first picture was around 2 feet under water, making it really hard to fish. Nice fish though, I will have to give the plugs a try next time!

Bet that parking lot will be a little towards the full side the rest of the week with a report like that!
K
Kodiak
Can you not keep the nooks in there? Or do they have to be clipped?

i gotta get out soon...eating lead paint chips just isn't calming me down like it used too.
Last edited: Aug 3, 2009
O
osmosis
He could have kept it. It had a couple sore spots on it so he let her go, to (hopefully) spawn.
Fall fish dont need to be clipped.

You stay in the garage and make some more spinners!! Give me a call tomorrow and we'll set somethin up.
O
osmosis
It was already full today Mike!

Tom needed those fish! He's gonna be a fish killin machine from here on out now that the skunk has been dispatched.
A
autofisher
Congrats on the fish guys. I hate to say it, but I'm green with envy. Hopin to hit the N. Santiam here in a couple of days with Raincatcher and do some slayin of our own.
T
Troutier Bassier
Thats One of the Biggest Kings Ive seen that was THAT Chrome!
Nice Job
So Tanner Creek Huh?
Seems like a Good little Creek.
Is it Crowded?
Y
youngbuck307
So to start this all off I have to say :dance::dance::dance: Like osmo said it was dead for the first part of the day..... thing all changed when we got up to tanner....The Chinook straight up kicked my butt!!!! It was when she wanted to go upstream so we went! After shooting up so a shallow flat with half her body out of water he spent her last part of the fight in a deeper pool. After I stopped shaking it was nothing but a Steelhead bash!!! There were a ton of native fish we caught. I had on one other hatchery fish on that day and he just went NUTS. At first he went up river with a lil hop skip and a jump... I turned him and down he came......went flyen by me :shock: and I had to like straight run to gain anything on him... got him to the bank and he was foul hooked outside of the head. so back in he went.


So I have to say once more Thank you so much Osmo. I learned so much today its crazy was hard to take it all in lol ill need a lil more time with YOU before I'm a fish killen machine but today I walked away a better fisherman.... I am sitting here now thinking of all the things could pick up on just today and I can't list them all but just lil things like where fish will hold what they pick up on when it comes to drifting, why they will hit a plug in that lil of water(that fish bit that plug because it was put in its face enough times with out snagging it and scaring it off that it finally got p***ed off at it and wanted to chomp on it a lil), there was also the lil filet trick so it fits in a one gallon bag. The list just goes on and on. Thanks

And when it comes to that creak Osmo was just there yesterday and those fish were not there! It was luck that we hit it then with the fish pushing up in there like that. Now with how many people were there today and now with this post how many will be there the next few I bet they scare them all back out. One other thing I have never before seen a river turn black due to smolt!!!! There were so many it was just crazy. Most I have ever seen. Evan at a fish hatchery they weren’t that pushed together to turn the water black.

Damn....those pics make me want to go fishing!
D
davep
Nice Job boys....work has kept me from fishing the last 3 or 4 weeks but its almost time to head out again...
M
mgdguy
Way to get after em! :clap: :clap:
F
FishKiller23
Congrats Tom. So now I guess I can't give u crap for not taggin any thing. Its always a blast to see a buddy catch one.
Y
youngbuck307
Thanks everyone for being so nice.... I tossed some of that fish in a lil aluminum foil with some onion on the bottom of it a lil butter, and a touch of lemon... and was it was the POOP!!! I normaly am not a big fan of fish.... There are a few I eat but not many... even salmon is a lil too fishey for me but now steelhead i could eat for weeks its so good.

But i just got up today and my side/stomech went in the bathroom to look and i have about 6 circle bruises.... I must of shoved the handle there during a few of the figts and with my adrenaline going to much to notice at that moment...

and if anyone is planing to take a trip out there u should shoot me a PM cost a lil much to go out there when u get like 10 MPG
Last edited by a moderator: Aug 4, 2009
You must log in or register to reply here.