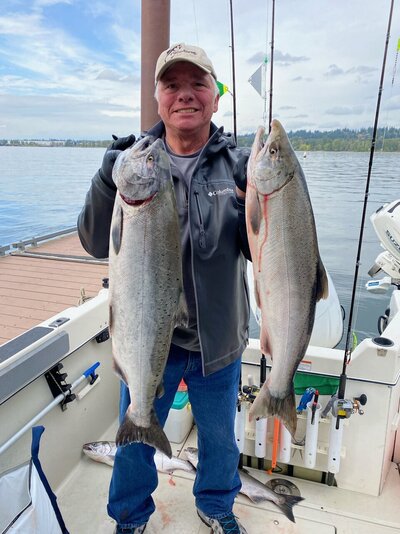 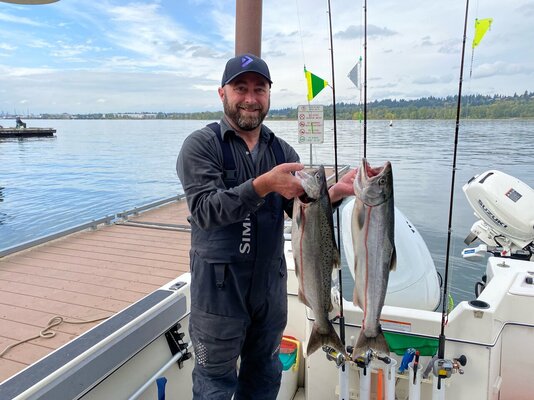 he season is definitely winding down, but when my friend Todd asked if I would like to join him for a boat ride from Gleason boat ramp by the airport down to the Warrior Rock area, on Sunday, I gladly accepted. He is putting hours on his new Suzuki 140 hp, nice motor. It took about an hour to go the twenty or so miles. Once there, we deployed the pro trolls and superbaits, with 16 ounces of lead, and began fishing with 36’ on the line counter, occasionally going down to 45’ when the depth allowed. There were only a few other boats on the river, and we did not have high expectations, but were glad to be on the water. About ten minutes into the first drift, my rod goes off, nice hatchery coho, cool! About 25 minutes later, my rod goes down again, I nice chinook salmon. We did a few more passes and landed one more chinook and a hatchery coho. Nice drive back to the boat ramp and home in time for dinner. I do love the fact that the river fishing is much closer than the ocean, and the clean up, no salt, is much easier and quicker.
Last edited by a moderator: Oct 21, 2021

Invite for a boat ride, fish in the box, short dive home in time for dinner. Thats is a good day!
You must log in or register to reply here.