Headed to Garibaldi Saturday, July 3, 2021, to begin an extended stay. My boat and travel trailer were already positioned in the Garibaldi RV park. The plan was to fish for 8 days in a row, for coho, if they were present. On Sunday, July 4th, fished with my friend Jim in his 19 Arima. Jim caught one hatchery coho, I did not catch any. We did have some natives, released, and several other strikes that did not stick. On Monday, July 5th, fished again with Jim in his boat, we both caught our limit of coho, 2 hatchery fish each. It felt good to get our limits. We were using cut plug herring, some red and green label, I was using a Short Bus Pole Dancer flasher, and Jim was using a blue flasher that he has had for years, and is quite productive. The fish were found from about 18’ to 40’ on the line counter. I like to start at about 18’ and go deeper as the sun hits the water. Seems the fish go down a bit with the sunshine, although not always.

The most productive area seemed to be about 175’ of water slightly northwest of Twin Rocks. The boats were fairly spread out, but all seemed to be fishing the same general area. On Tuesday the 6th, went in the morning with Jim again, he had his two hatchery coho by about 10:00 a.m. I had none, it happens! He had to go, prior commitments, so I launched my boat, a 20’ Weldcraft, and went on a solo mission. After losing a few fish, and releasing a couple of natives, I got my first hatchery coho. Then the bite died. I decided it was time to change things up, and ran several miles northwest, well past Twin Rocks, and dropped in about 200’ feet of water, within minutes, I had landed my second hatchery coho. Two trips in one day, not going to lie, started to get a little tired, but having a blast. I love chasing coho salmon on the ocean. On Wednesday, fished with Jim again in his boat, and I got two hatchey coho, Jim got blanked on this day. Some people say it was the “hot rod” I say pretty much luck, but I’ll take it!

On Thursday, July 8th, fished solo again and caught my 2 hatchery coho. After running out of herring to cut plug, I switched over to a Yakima Bait Spinfish, Lemon Head Glo, filled with herring guts. This lure in my opinion fishes as well as cut plug herring, and if you get a strike that does not stick, you do not have to reel in, just let it keep fishing. A very productive, fun to fish lure. I replace the guts every hour or so to make sure I am releasing a good scent. These lures are very difficult to locate at this time, I am fortunate that I bought some about a year ago.

On Friday, July 9th, went with Jim in my boat, I caught two hatchery coho, Jim did not record any. Still a lot of other action, between native fish, small fish, and strikes that did not stick.

Only two more days left to fish at this point, I am o.k. with that at this point. On Saturday got a late start with my wife, she lost one coho close to the boat, then caught two hatchery coho in fairly quick order. We picked up the six crab pots we set and got 14 keeper dungeness. The ocean was getting rough, the wind was blowing, so we called it a day. One more day to fish, Sunday July 11th. Dropped the 6 pots and headed northwest of Twin Rocks. My wife lost a fish, then she had to take a phone call. The rod went down, fish on, what could I do. It was a nice hatchery coho, again ocean was getting rough, and wind was picking up. We picked up our 6 pots, only 3 keepers this time, and headed back to port. The ocean crabbing reports have been very poor, we got lucky with the 14, the 3 was a reality check. It may be a better option to crab in the bay at this point, or wait another four or five weeks. 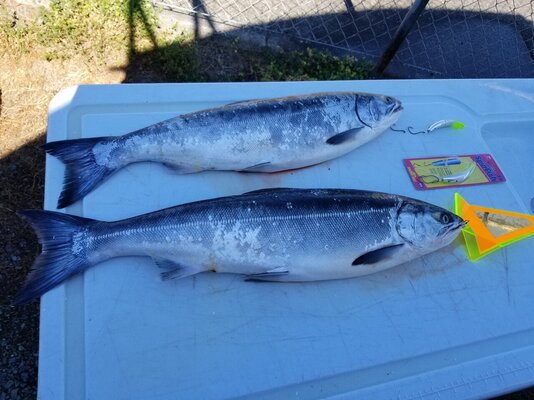 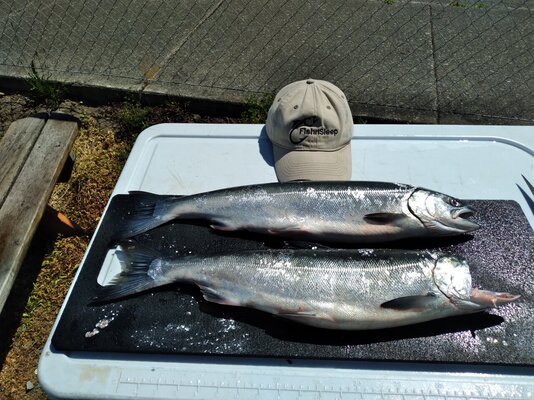 I've heard good things about the coho action down south too. Glad you got in on the action.