Blabbermouth hole I mean OFF hole

B
bigdog
Well it lived to it's name again this morning think there was about six or seven members down there. Got to meet a couple new guys and was good to meet you guys.

Had a pretty good day out there today. Got tired of hooking in to this mess of line that was about half way out in the river, so I headed out there and came back with this. In the water ats its prime this was twenty feet of stretched out snag heaven. 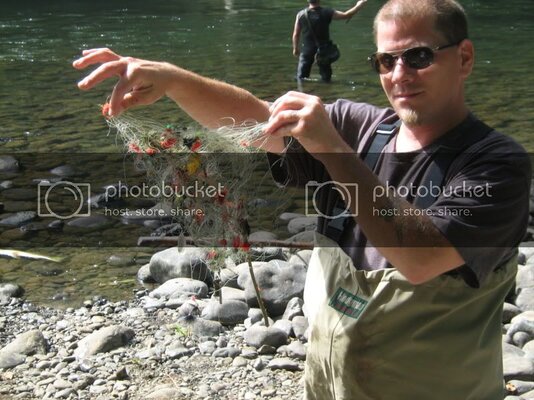 Well going in for that must have paid OFF because the the fish gods smiled at me about a half hour after doing so and gave me this 27" shiner. Some how or another it still had three sea lice on its tail, so I know this guy had to of swam up stream fast to get that high and still have them on there. 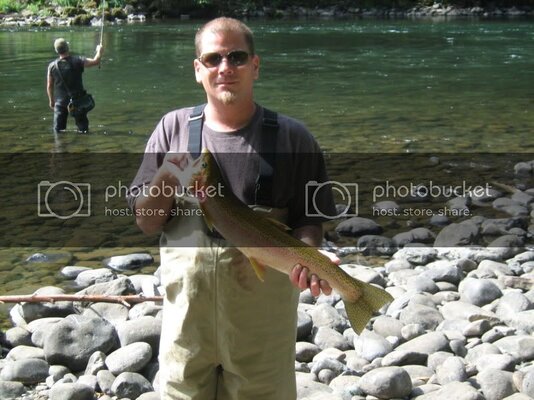 Saw three other fish banked, one of witch was a pretty nat. We had a few fish ons and fish gones for the day to but thats just part of the game we play out there.

Good luck all.
CJ
M
metalmania
That's a gorgeous fish you got there man:clap:. I love it when they start to color and get that beautiful green and red with those rosie cheeks. Way to go.
F
Fishtopher
Right on man! The hot streak continues! Finally got some waders too I see!
M
Markcanby
Hey man what happen to your DC waders?
B
bigdog
Yeah I had to break down and get the waders and got the felt bottom boots to go with them to. Set me back a bill but was well worth it.

kirkster
blabermouth hole, To funny bigdog:lol:, It was an awesome day fishing with all the forum guys I dont think I laughed like that in a long time.:lol:
Well bigdog its starting to rain in Oregon city hope it keeps up if so I see a coho hunt in the future.:dance:
M
Markcanby
Hey has the crowd subsided enough up there that I can try my new 8wt?
I dont want to make anyone cry Im messing up there whole day cause Im not fishing spinners.:lol:
B
bigdog
If it keeps raining monday is going to be a coho day and if it looks good enough out there so is tuesday.

Not to sure about less people but smarter ones down there for the most part. The spiner tossers were down river away from the drifters.
Last edited: Sep 4, 2009
F
Fishtopher
By the way, I think I see a few of my Okies in that mess youre holding up!:lol:

kirkster
hey bigdog
If your on the river tomorrow I made up some slinkies for ya. I figured I would trade ya for a coho trip:dance:
F
FishSchooler
I see a Blue Fox! Troutier must of been there earlier...
Last edited: Sep 4, 2009
B
bigdog

kirkster said:
hey bigdog
If your on the river tomorrow I made up some slinkies for ya. I figured I would trade ya for a coho trip:dance:
Click to expand...

I'm thinking I might be out there for a few hours in the morning. Can't be a all day thing though have some things I need to get done around the house to.
M
Markcanby
Man if you sort through that mess you wont have to buy any gear for the rest of the year!:lol::lol:
T
Troutier Bassier

Markcanby said:
Hey man what happen to your DC waders?
Click to expand...

They have Hollister Skinny Waders dont they?

kirkster
probably be an afternoon shot for me . If I dont see ya down there this weekend and if the weather rayrain)ray: cooperates lets hook up monday for a coho shot.
G
GDBrown
Hardware!


Markcanby said:
Man if you sort through that mess you wont have to buy any gear for the rest of the year!:lol::lol:
Click to expand...

I think I see some mine from two weeks ago. I picked up a bunch of that stuff too. I just did'nt go that far out into the lane. No wonder we loose so much out there. Good job cleaning and catching. I'll be out there at first light tomorrow for another lesson. You guys have taught me a lot.
F
FishSchooler

They have Hollister Skinny Waders (in pink) dont they?
Click to expand...

kirkster said:
probably be an afternoon shot for me . If I dont see ya down there this weekend and if the weather rayrain)ray: cooperates lets hook up monday for a coho shot.
Click to expand...

Get ahold of me and let me know what time frame you looking at being there for and I'll try to make sure I'm there.
M
masmith

FishSchooler said:
I see a Blue Fox! Troutier must of been there earlier...
Click to expand...

Is it black, or silver blue? If so- it's mine!
B
bigdog

masmith said:
Is it black, or silver blue? If so- it's mine!
Click to expand...

No no my good fellow members all of witch you see is mine now.
And it is a MJ
You must log in or register to reply here.