My buddy and I fished around Bandon area for a total of 11 kept.About one hour before the high, the bite was fast and furious.I hooked 5 in 5 casts.Biggest was 15 inches and weighed just over 3 lbs! we let several go as well that were small.Have fun! 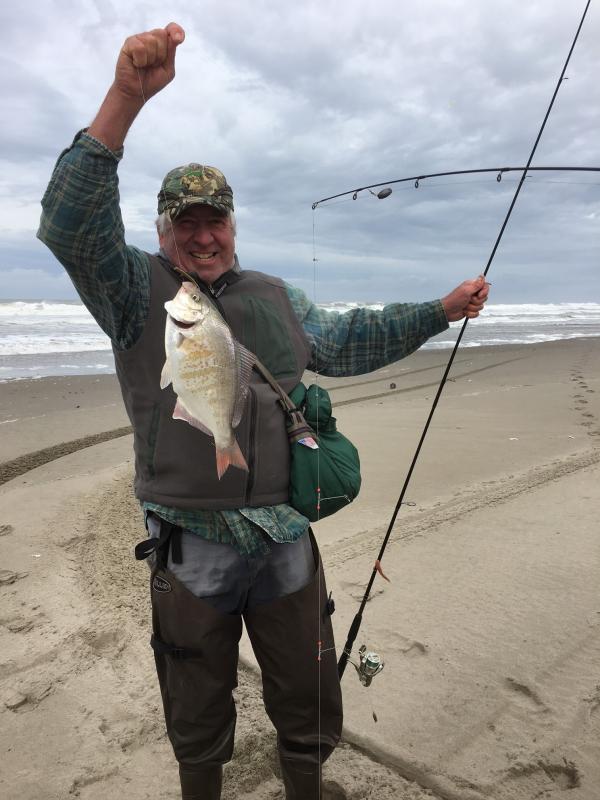 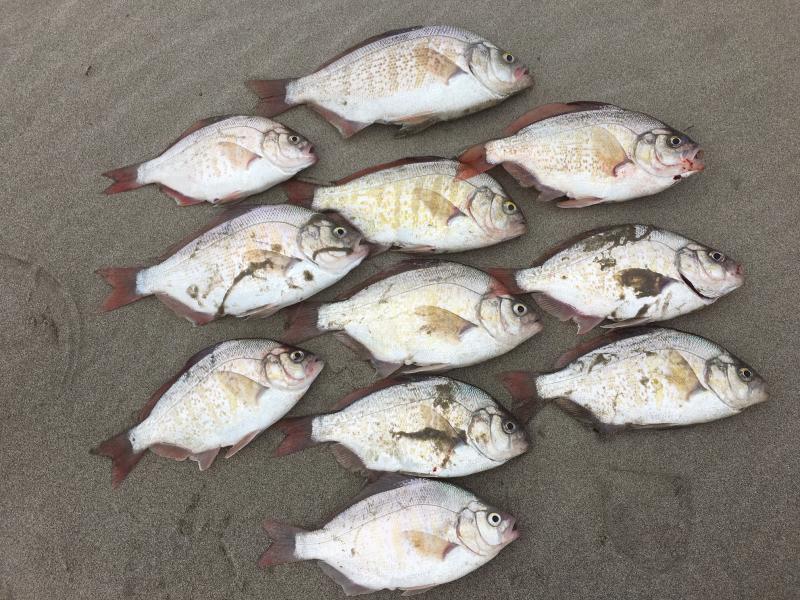 Good sized ones there.

Is El Nino the reason the perch are around this winter or am I wrong when I always thought they were only around a few months of the year? Those are HUGH!
dang I love to eat them. Guess I'm going to have to get over to Manhattan Beach.
G

They are getting ready to spawn,but there are usually always a few around.I think P K gets em all year .Next few months is prime time

troutdude said:
Scoot over, and hand me a fork!!! LOL
Click to expand...

Nobody uses a fork to eat fish tacos.

pinstriper said:
Nobody uses a fork to eat fish tacos.
Click to expand...

Wow. Nice dinner fare! Makes me want to go give it a try this weekend

I tried to fish in Newport for a few hours on Tuesday (family vacation). The surf was really rough and the current was really strong. In an hour and half of fishing I had a clean miss on one bite and had two other fish hooked for a bit, but the hooks pulled out before I could land them. I was not surprised by my "success" given the surf conditions.

Driving home along the coast on Thursday was breathtaking. The surf was so huge. My wife (drove separately) stopped with the my daughter and her friend in Depoe bay. The spray from the waves was breaking up over the bridge. She said a huge wave came and so much spray came over top of them that it blocked the sun for a second and it was really dark where they were standing. Pretty wild!

Congrats again on pounding the surf perch, much better than getting pounded by the surf like I did
B

Left Reedsport at 6:00 AM heading for Bandon to do a bit of Dungeness crabbing outside the jaws while trolling for Chinook inside, near the jetty. Due to the full moon; we had a minus tide which is lower than normal and a plus high tide where it was higher than normal. This means there is a large amount of water moving both in and out on the tides. Because there was a full moon last night causing those tides, I gave us a lower than normal chance at bagging a salmon.

Yesterday was spent working on the boat. We added Scotty Striker rod holders on flush mounts for the forward two and kept the rail mount for striker mounts on the rear. In addition we finished the depth sounder mount assembly just in case we should need that apparatus (see the photos).

We arrived in Bandon about 7AM and by the time we went a good mile away from the jaws and laid all six Crab pots it was nearing 8AM.
I’m told by some in the know the fish are seemingly following baitfish in and out with the tides, so we targeted those fish. After the second pass, the current became almost a rip tide it was so fast. We were actually backing up when trolling at 1.8mph, while using a full 10oz cannon ball weight to keep the cut plug Herring close to the bottom.

The first Chinook came near 9:30; a buck of 16 pounds on a cut plug, blue (Pro-Cure) dyed Green Label Herring. Adrenaline rush… the skunk is off! Well, for my friend Doug.

A full hour later my rod lunged down signaling a good fish. After a short 25 minute battle, seeing the fish make one heavy determined run after another I knew I’d be pleased to land this behemoth. I was actually hoping him to be her (eggs and all). But, when all was said and done he came to the scales at 33 pounds and nose to tail at 44 inches. 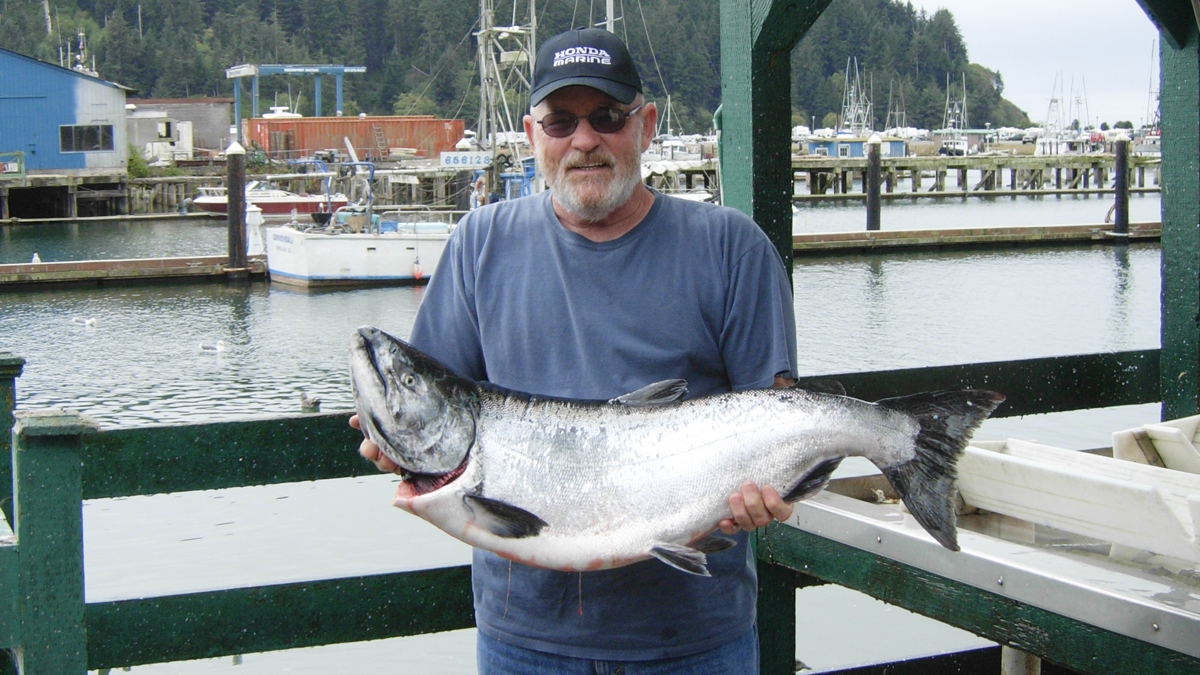 The rest of the day was anticlimactic because of the morning’s excitement. We did however, come home with two limits of Bandon Dungeness crab in addition to beautiful Salmon… We are going to Bandon again in a couple of days as you might have guessed.

Side note: Crab at Winchester Bay and Charleston seem to have a large accumulation of barnacles, while those at Bandon were larger and had absolutely none. We mentioned this to the ODFW Biologist who checks boats in and she said she didn’t know why, but the question was a good one and she would research it.
Second note, I’ve shared Bandon Dungeness Crab with several people who state the Bandon Crab are far superior and sweeter than others. Suppose it has to do with their habitat and as well as… no barnacles??? Why no barnacles? Hope she comes up with a real answer.

Nice haul I like Bandon very quaint place and be careful on those ripping tides!

Wow that chinook is a hog! Nice crab too. I know what you mean about those tides when the Columbia gets ripping on a minus tide it becomes incredibly difficult to fish and is sometimes just down right unsafe. Hope you next trip is just as productive for you.
Last edited: Sep 19, 2016

Great report,sounds like an awesome time! Great looking fish and the crab.............oh so yummy.
G

Took advantage of the weather and took the LONG boat ride from Charleston to the Bandon high spot. We had 3 fish in less than an hour.34-37inches.400 feet using Humbolt Gold (humbolt squid) and a 3 lb ball. Wind came up on the way home and it took 2.5 hrs to get back. HAVE FUN! 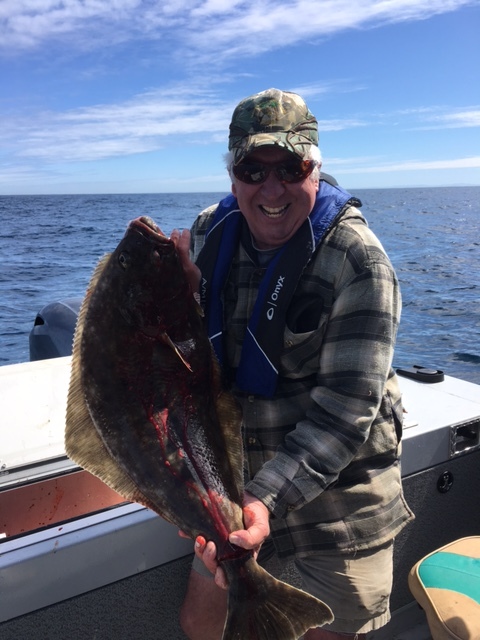 excellent. those should be tasty sized butts.!
M

Perfect eating size! The really big ones tend to get kind of grainy.

rogerdodger;n604515 said:
excellent. those should be tasty sized butts.!
Click to expand...

Hey Roger, I assume that new avatar is from U2 at Safeco?

Hey Roger, I assume that new avatar is from U2 at Safeco?
Click to expand...

yes, except it was next door at CenturyLink Field, took our family, we had 8 great box seats at the 50 yard line.

so to avoid totally hi-jacking his thread, I will congratulate Whip on his Beautiful Day with this image from that song...