After getting reports springer were showing up in the Columbia, It was time to get the Double Lu in the line of fire. My step son and I met Capt. Mike & his client out near our secret nooker killing grounds. despite out collective best efforts we couldn't manage to gt one interested in our gear.

Out of perhaps 12 boats we saw one caught and released.

Meluvtrout and I hit it the same place Sat and out of 20 boats again saw just one fish caught.

After skipping Sunday, the kid and I set after them again this morning. We spent the morning trolling along w/ maybe 7-8 others until the tide changed and current picked up.

The past two trips when on anchor, I'd run wrapped Chrome / Green K-15 to the inside and Chrome / Red K-14 to the out side. This morning i did the same gig except I used wrapped K-14 and added hemorrhoids to the chrome/ green number. We spent a hour before I began thinking I needed to change back to the K-15. I commenced to getting new gear set up and had the new quickfish 3/4 dressed when nick belts out... Fish On.

I look up and see my rod tip smashing the surface of the water as the drag surged w/ each head shake. After a quick hook set, I kept pressure on it and it drifted to the surface and rolled.
30 yds back all we could see was the surface boil;A jack maybe? It actually came in rather close to the boat before All hell broke loose. 20 feet off the stern I saw a huge silver flash and realized............ Pig On.

All in all it the fight lasted a solid 25 minutes 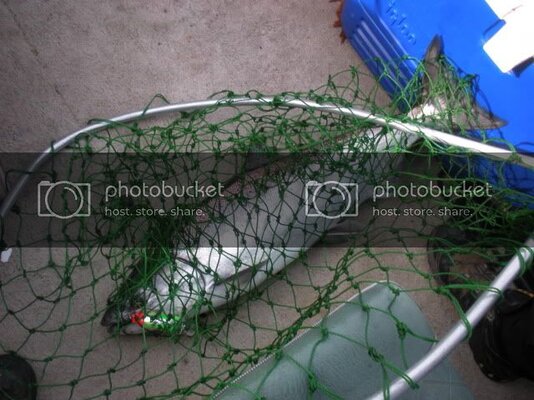 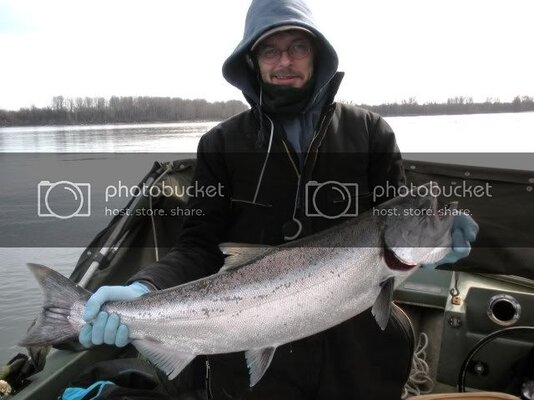 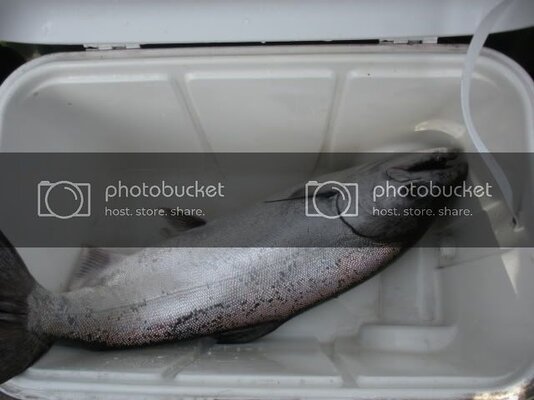 T
Thuggin4Life
Very nice fish Man! Persistance pays OFF! I am a bit confused to the capt mike and his client. Sounded like you took you own boat but had someone else captian it and take a client out with you guys as a guided trip? I am very confused Are you a guide? Did you go with a guide? did you take a guide with you? Is captian mike just mike? client? Nice fish though can't wait for them to make the journey past you guys up hear.
T
The_admeral
Very nice!!! I can't make it down river for another month. These reports are getting me through it. Thanks.....
O
OnTheFly
Nice one Dan!!! That'll be a forum headliner photo for sure.:dance:
H
halibuthitman
Great job!!! and some size too!
F
Fishydog
That cocky smile looks good on you Dan , we'll have to get out and do the boat doe see doe
I got an 8hp for the boat and been playing under the Sellwood bridge, saw 2 caught this afternoon; 1 nate and 1 ?, also saw a sea lion lurking around :naughty:.

Beautiful fish Mr. Dan! :clap: That grin does look good on you. By the way,I just happen to have a really big cooler... :lol: Congrats!
C
Cohosanders
Persistence Pruduces a PIG:lol: Good job Diligence Dan:clap:
F
fishnquest
Dang Dan! Thats a whopper! :clap::clap::clap:
M
Mike123
Awesome work! Sooo freakin jealous.. Can't wait for them to get a lil' bit closer this way!
K
Kodiak
Verry nice. Well done brother!
S
STIKTIME
Wow, thats a great fish!!! Can wait to get into one myself!!! Congrats on the early springer!!!!
A
Anyfishisfine
That's a nice fish. Great way to start the season.
M
meluvtrout
Woot wooooot!!!!
F
fishwithdynamite
Wow!
F
Fishtopher
Nice fish bro!
A
autofisher
You're an animal!! Can't wait to get mine.
S
Swamp Puppy
Color me green with envy. 3 trips out this year so far and not even a bump. Might have better success with these dang springers if my boat was set up for trolling....as it is i typically plunk from a bank or sit on anchor. I think i will be doing more anchor fishing this year as the plunking deal was a bust last year.

nice job on a great fish!
You must log in or register to reply here.

E
Like a rash I'm coming back! Smallmouth in late September?