Why you should respect the river

T
TTFishon
Last Monday me and FP decided to make a Coast Fork River run just for the heck of it. We put in at the Dilley ramp just off of hwy 58 and floated down to the main stem then to Day Island Park. Most of the float was slow going. We had to row most of the way, at least an hour and a half of rowing. :lol: There were maybe 4 or 5 sets of rapids to navigate through and the last one was a doozy. I think I hit a rock and the force pushed me right into the current and under an overhanging bush! :shock: It happened within a second and once I realized I wasn't going under I started breaking branches to keep my pole from breaking and to get the heck out of there. FP came down to give me a hand but there was nothing he could do but give me some advise to try and get the back end out and away from the bush. I couldn't use my oars because the current had them forced up against some rocks. I had a couple of choices, either jump and try to recover my toon or break free only to be forced into another bush. I chose the latter. Luckily the other bush was a lot stronger allowing me to grab a thick branch and force my toon out into freedom. I only managed a few scrapes, one splinter in my knuckle, a dumped cooler of FP's Mountain Dew, and this 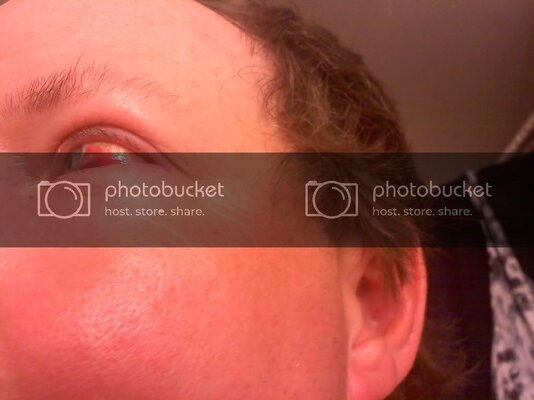 Good thing I had my safety glasses on. :lol:
L
Left Bank
Ouch man!!! Sure you're OK? That looks pretty messed up.
T
TTFishon
Yeah, I'm alright. I didn't notice it until the next day. Everything happened so fast I don't even remember getting smacked or poked in the eye.
B
beaverfan
Ouch man, glad you made it!
T
TTFishon
Me too. Thanks.
T
Thuggin4Life
wow man makes you think twice about things. good thing it didn't end badly.
M
metalfisher76
Glad yer ok!! Man that`ll wake ya up in a hurry.

Raincatcher
Hmmm I think you just discovered Troutski's "pucker factor"...lol. Glad you came out of it okay. Who would've thunk you would need a weed whacker on a float trip? ;-)
You must log in or register to reply here.

S
Sandy River....ghosts of fishing past

Sturgeon fishing has been good!