Like many, I started targeting the Coho late September. I made a ridiculous amount of trips hitting the Sandy, Clackamas, Eagle Creek, Nestucca and Wilson always coming up empty handed (avoiding the crowds for the most part). Scratching my head (more like pulling my hair out) I couldn’t understand why I was failing miserably time and time again. After all, I was using proven techniques and tackle in water that had fish. The more I got skunked the more obsessed –like I became determined to find success. After spending countless hours chasing fish, it would be quite understandable why one might hang it up and move on to other things (such as being a productive contributor to society). However, I was well beyond rational thinking at this point.

This week, I had a couple hours in the afternoon available and giving some thought as to how I could spend my time (working, exercise, errands, etc) my compulsive obsessive fishing behavior took over and off I went to give it a go. Something was different this day though. I left my float rod at home. In addition, I didn’t take any bait and decided to only throw my spinners (which is my first choice typically anyway). In addition, I knew exactly what hole I was going to hit without stopping along the way other than maybe to see if I could spot a fish in lower water since it was sunny and clear. As I drove out, I had an overwhelming sense of confidence that my time has come and this is the day. Making my 45min hike into the hole, I thought to myself that this will be a long walk out with my fish but a good one none the less. To my astonishment, as I approach the hole, there was absolutely no one in sight up or down river. I took a few minutes once on the scene to see some fish roll (phew, was concerned that maybe it thinned out).

Casting began. Fate must have had a hand in my day because I casted into the trees three times and somehow managed to retrieve my lure each time, taking branches down and all (Blue Fox #4 Michael Jackson body, silver/chartreuse blade – most producing lure in my box). As if that wasn’t close enough, I snagged about 50ft of line (must have been 25lb test or close to it) connected to a drift rig. I was able to reel it in close enough to where I could grab the line and break it off. I’m thinking, “nice, got my spinner back and cleared the river of that crap” Next cast and I snag what was leftover of the snag I jus t got freed from! This time I figured it was a done deal so I tighten down the drag, drop the pole and begin walking back, *SNAP* No way… the snag broke and got my lure back. 5 times I should have lost my lure but for some unexplainable reason, I got it back.

Soon after, I make a cast and then it happens. *BAM* Hookset! Chrome flash, it’s on! The fish makes some runs and rolls but comes into the bank rather willingly. It’s a chrome fin-clipped hen! But wait, what do I see? Gashes from a run in with a seal or sea lion. There were a couple flesh wounds on the tail. I pause to think about what this girl has gone through to get here, into my hands. I considered releasing the fish but then felt that this was a “meant to be” moment and that although I am going to take this fish, it will not go unacknowledged that this is a marvel of nature and an example of the challenges life endures. Neither the fish nor I ever gave up yet meeting in the end. The meat will be smoked and shared with family and friends, the eggs will be cured for the next adventure and the carcass will go into the garden. It was a long walk out but I was glad because it gave me more time to savor and reflect on the moment.

Here she is. Probably the most expensive yet rewarding fish I've ever caught. Although poorly clipped, I can assure you this is a hatchery fish. Around 24" 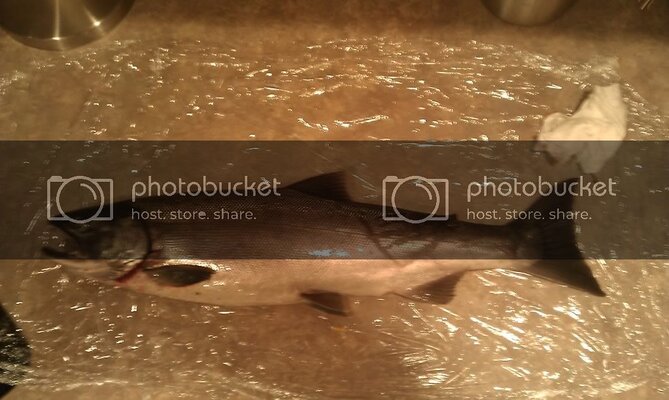 alm21 said:
As I drove out, I had an overwhelming sense of confidence that my time has come and this is the day.
Click to expand...

In my opinion, confidence is 95% of the battle for getting into fish. Knowing your technique will work, and giving it the time and respect to develope into a fish strike...


And very kind hearted to contemplate the fishes life, but you completed the cycle in that fishes life.


All hatchery fish must die.
M
mgdguy
Woohoo! :clap: This post is giving me hope! :lol:
J
JeannaJigs
Awesome story, this is why we all stick with it...eventually...all the insanity pays off.
N
nwdunerider
Nice Chromer. I know how you feel . I am 0 for 5 trips this fall. We have put fish inthe boat 3 of the 5. Just not me !!
Yet I will be at Siltcoos on sunday going for it again. Here is last saturdays Siltcoos coho Not me!
J
jawjacker
Persistence pays off

Way to get her done. Nice fish/report. I think a lot of people have had to be persistant this year I know I have. Confidence is definitely the key and your not going to catch a fish pouting on the couch.:clap:
H
Hendo30
Great Fish, Love the story...........and I appreciate the message! Way to go. Thanks for sharing.
F
Fish-N-Chips
Well written story. A good read for sure and a beautiful fish:clap:

rogerdodger
full marks for the story and the fish....
E
eugene1
Beauty of a fish! i get more motivated when a drought sets in too.

good work to keep at it! Hopefully just the tip of the iceberg.
O
OnTheFly
With ya the whole way on that one. Nice fish.
A
alm21
Thanks for the comments everyone. I know anglers share in this drive to overcome the odds and find success. I see many parallels between angling and other aspects in our lives. For me personally, my fishing experience is representative of other things I’m dealing with and I find motivation through angling to succeed in other areas.

I think it’s important to note that there was one but seemingly significant change I made when I caught that fish. You see, I’ve never owned a “premium” rod like G Loomis or Lamiglas. Returning from a previous bust of a trip, I stopped by Bi-Mart to replace some lures and saw a sale for $20 off any Lamiglas. My current Berkley Buzz Ramsey IM8 Med action 8’ 6” was showing some wear so I thought this was a great chance to try a Lamiglass. So I went ahead and purchased a Lamiglas Med action 8’ 6” Cascade Pro XT. Fast forward and after numerous trips I found myself missing strikes consistently. My assessment was that this rod, which is “equal” to the Berkley, was way too soft for the way I fish. Since my son was using my Berkley, I told him on Sunday that I am switching back to my old rod and have decided to go buy another (eventually) while finding a new use for the Lamiglas. My Berkley felt much better on the strike and I’m convinced it made a difference that day.
L
lilsalmon
Good job!!!! Great story and very nice fishy
W
waco
Great report man!!! Nice fish!! Persistence always pays off!!! BTW you dont need a lamiglas to fish with confidence!!
A
alm21
Went and hit it again this afternoon. Why quit now?!

I started out by throwing lures for the first hour and a half but no joy. Wanting to catch a fish on the drift, I switched rigs. Using a Michael Jackson corkie I put on some chartreuse EZ eggs. An hour later I had a fat 26” hen and a 25” buck. The hike got a bit longer with two fish but no complaints here! Back in the game!

The skeins in the hen were HUGE. All of sudden, I’m sitting on a stash of cured eggs. 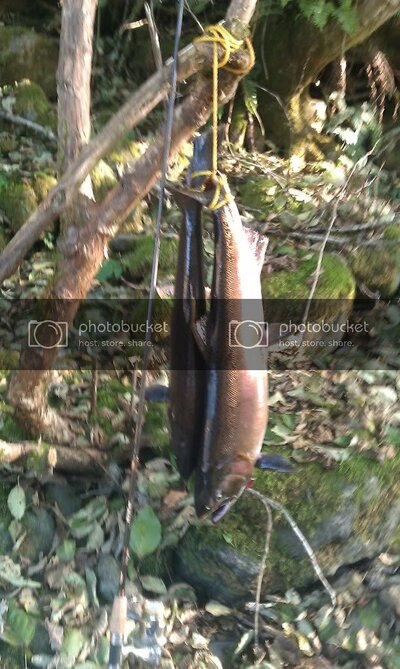 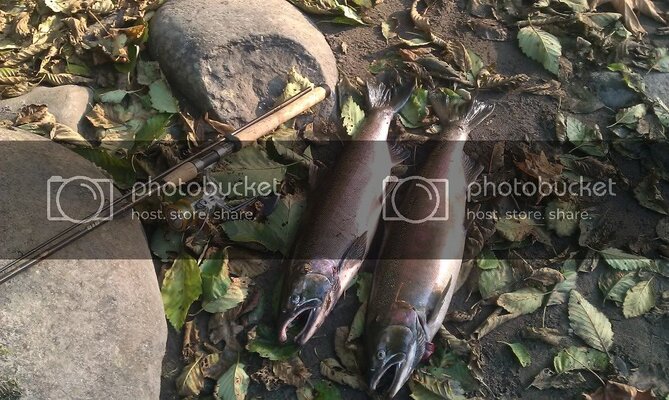 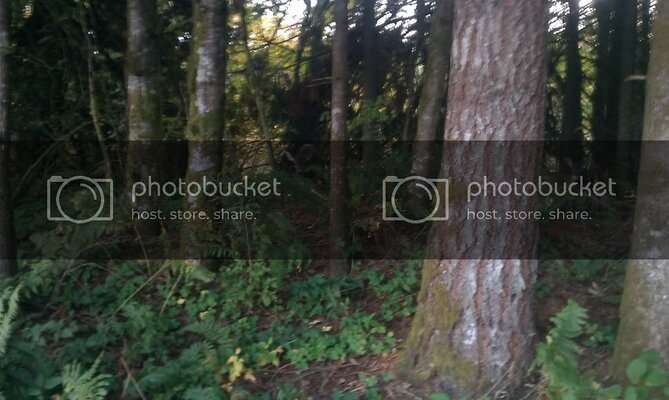 waco said:
BTW you dont need a lamiglas to fish with confidence!!
Click to expand...

Nuf said!
B
beaverfan
Hell ya man, way to go!!!!! Fishing with confidence is a huge part of it!
R
RunWithSasquatch
Awesome!


Looks like bambi is making a move on you.
You must log in or register to reply here.