A
Airs98
I caught this Columbia salmon a couple of days ago and I noticed this weird coloration on the fish. Looks like the tail half of the fish is much lighter in color. It's not a shade from the sun or anything of that sort. Any ideas what it could be?
Last edited by a moderator: Mar 20, 2018
B
beaverfan
I posted a pic of a Steelhead here with the same dang thing, can't remember what the conclusion of that thread was.
M
Mad dog
I have seen that quite a bit with springers once they are bled, more so with the fish that have been in the river longer or have more color than fresh fish. I don't know why it happens but it is always after the fish has expired. I have noticed lots of varying degrees of fading in the tail half of the fish over the years. 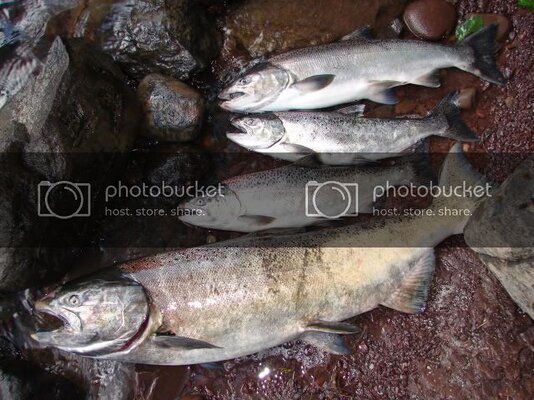 troutdude
IDK, but could it be part of the decomposing process? A release of gases/fluids, etc?
M
Modest_Man
Most fish have the ability to alter their color based on surroundings/mood/whatever. No where near the ability of say squid or an octopus, but they can still change colors, usually lighter or darker based on stress or environment. My bet is that there was some nerve damage done (either before the death or related to cause of death - head bashed in?) which led to the partial color change.

I've seen this in freshwater aquarium fish (when still alive) that have nerve damage resulting in half of the fish being black with a very distinct line where it starts and stops as they lose control of their color altering mechanism.
N
Noahk
I would think one possibilty would be livor mortis, which is just the settling of blood after something dies. See below. Did it look the same on the other side?

Livor mortis - Wikipedia, the free encyclopedia
C
chrisohm
There are also muscle differences towards the tail end of the fish that can contribute to this. Their bodies possibly shut down the melanin attributes in this section. They are migratory fish, once they hit the home stretch their metabolism shifts dramatically. Otherwise it can be from weak genes, disease or other physiological issues.
A
Airs98
Thanks guys for the info! There is so much to know about the fish we catch.

And, yes, it did look the same on the other side.
You must log in or register to reply here.